In the age of electronic pop music it’s not easy for a band to break into the genre and hold their own. GGOOLLDD is a local Milwaukee band whose indie take on the genre has earned them a growing following. While their lyrics aren’t as contradictory and clever as the Blues Traveler’s But Anyway or as nonsensically honest as The Griswolds’ Beware The Dog, there is something grabby about GGOOLLDD. They are like the Pringles of music; you can’t listen to just one song. Small wonder GGOOLLDD is crashing through the music festival scene, landing performances at Summerfest and Summerset. But we managed to slow GGOOLLDD’s Tony Hunt down enough to talk to Urban Milwaukee about the band, its history and approach to music.

When did you band get started?

GGOOLLDD was formed in October 2013, but the band that we have now was created in March of 2014, with our last member, Nick Schubert, joining during that summer.

GGOOLLDD kind of came together when I met Margaret at Tonic. Her boyfriend Nick (our bassist) was tending bar and she had just decided she wanted to be in a band after watching local band Rio Turbo. I had a couple songs I was working on for some soon-to-be solo stuff and so that night around 4 a.m. I sent her the bones of what would become “Gold.” She put lyrics to it the next day and by the end of the week we had a song. So from there we decided to throw a party on Halloween, since it’s Margaret’s favorite holiday and then Margaret, Nick and I needed a band, in four days. We threw up “Gold” on band camp, organized an attic party, got our buds Low Down Sound to kick the night off for us, and had our good friends Thomas Gilbert (who is still in the band) and Alex Lichtenstein take over some instrument duties. And ever since then we’ve just been getting asked to play shows. It’s been pretty great!

We all kind of bonded over a couple different bands, like the Yeah Yeah Yeah’s, Fleetwood Mac particularly Stevie Nicks, and CHVRCHES. Realistically though we all come from different backgrounds, and I think a lot of weird influences in punk, noise, dub, classic rock, 90’s pop and 80’s synths get blended together and all those individual sounds and feelings inspire us to write.

But to make a long answer short, definitely Eddie Money.

Margaret and I loved the name “GOLD” but decided it was too hard to google and didn’t really stand out, so we doubled every letter. It ended up looking cool on posters and it stuck, for better or for worse. Sometimes we get flack for it but once you know how to pronounce it and spell it, you really don’t forget it.

We’ve lost members and gained new ones, GGOOLLDD has always been a growing collective of musicians, but we are finally getting set in our main live show and have a pretty steady group of people that are in the band. We lost our rhythm guitarist Alex Lichtenstein when he moved to New York, and our first drummer Alex Jannke when he decided to bike across America. Our really great friend Malachi DeLorenzo sat in and drummed for us at our first real show, the fashion show at Hotel Foster, he’s the sweetest guy you could ever meet and we miss him. Malachi, if you’re reading this, we love you. Okay, glad I got that off my chest.

One review once called it post-punk/ synth pop, which I really enjoyed. Some of the stuff we release, especially our newest single/video Boyz, is really just straight pop music, but the lyrics are not always sunshine and hand holding. I feel a lot of the stuff we write comes from a dark place and we are looking for a brighter alternative to showcase those emotions. I think we just like to balance all of our weird influences and make music you can dance to, but maybe after a couple listens, the layers start revealing themselves.

Once again we all have completely different tastes in music but some stuff we enjoy right now, Kendrick Lamar, Jamie XX, Lorde, Prince, Warpaint, Todd Terje, Run The Jewels, Haerts, The Weeknd, Bob Seger and of course the legendary Eddie Money.

The local bands that have influenced me are the ones I grew up with/played shows with — Sat Nite Duets (formerly “Two Kids Get New Books, formerly “The Ultimate Clyde”) or the Fatty Acids or Terrior Bute or Rio Turbo or even Juiceboxxx. I was so inspired by these guys, just so talented and so fun to watch, you really have to have a good balance of those two things to create something people want to see and keep seeing.

They are not really about one thing, but definitely one theme Margaret and I write about is being accepted and being okay with your own voice. I feel like lyrically we write from a dark place, but try to take those ideas to a level of love and acceptance. Growing older is definitely a fear of mine that creeps into the lyrics, sometimes not so delicately.

Not out of the gate, but songs grow and they are influenced by what is happening right now around us. One song in particular, Gold, is a gay rights anthem to us; it grew into that while it was being written. With the Supreme Court ruling, I hope its message is even more apparent. Margaret even has “love wins” tattooed on her, it was just such a cool thing for all of us when that happened, and to play Summerfest that very day to a couple thousand people and see everyone unite and dance and cheer, very humbling.

It’s the strongest it’s ever been. We feel really blessed to be able to jump into the scene as it is starting to take off. I feel like everyone is vibing on each other’s music and when someone like Klassik or Soul Low or Canopies or Webster X or Lord Fred33 (I could go on) release something strong, it makes others step up and release even stronger material of their own. It’s truly amazing, the production, song writing, community, and shows being put together, some of the best in the country for local music. Even the awareness of shows and journalism has stepped up, Milwaukee Record, Tap Milwaukee, The Shepherd, 88.9, WMSE, Urban Milwaukee, tons of local blogs, it’s really impressive! I could go on and on about this but some other local notables we love are Platinum Boys, Bright Kind, Burning Sons, Piles, Field Report, Bliss & Alice, The Delta Routine, Light Music, Dream Attics, NO/NO, Kiings, Soft Targets… its insane the amount of talent here. Also a shout out to our boys at “Gloss Records”; they are doing something incredibly special with the way we digest local music.

Unfortunately our music scene is overshadowed by Milwaukee/Wisconsin stereotypes and politics; if we are ever able to shake those then I feel that the music scene will have a chance. If there is a break-out scene here in the next year, though, it is definitely going to be on the heels of the hip-hop scene and the young MC’s that are popping up.

I don’t know since half the band is not from here, but if there would be one thing, maybe the sound of the band? I feel a lot of the sounds I come up with, I wouldn’t have been able to create if it weren’t for the music scene I was brought up in.

We have played at Hotel Foster the most, but Cactus Club and Turner Hall are right up there.

If you had to name one place that’s your favorite place to play, what would it be?

Cactus Club, hands down best place to play in the city. It’s shitty and gross and the bathrooms are crummy and we love every second of being there. Wouldn’t change a thing about it.

We’ve done our rounds in the Midwest, i.e., Chicago, Madison, Appleton, but our first real time we toured was going down to SXSW this year. We are planning a tour east this fall after our busy summer and if that goes well, we hopefully will do a whole country or European tour, but first things first.

I think the amount of attention that we got/get sits funny with some people, but at the end of the day we play shows for our fans. The last few shows we’ve played in Milwaukee have been sold-out or at capacity; we are lucky and appreciative of everyone that allows us to keep going with their support. So, to answer your question, some people will be rain clouds, but it really doesn’t bother us.

Last July we released our debut E.P. $TANDARD$ and this year we release our single Boyz with some remixes by fellow musicians.

The debut album is coming soon, we just don’t know when.

There are some future fun collaborations in the mix. Other than that, we are also focused on the tour in fall and growing our fan base.

Keeping your relationship with your band mates strong. If I were ever in a position of losing a friendship of someone in the band, I would quit. Keeping these guys (and gal) as my friends is priority number one, not letting the band take over. 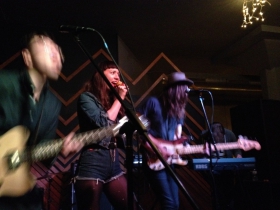 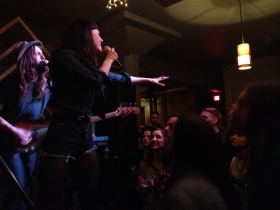 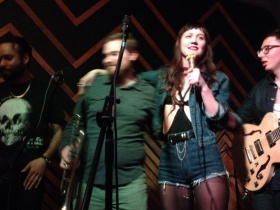 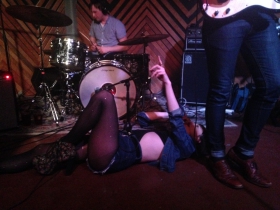 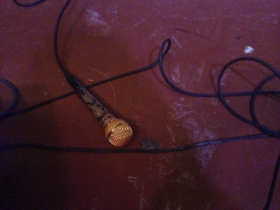 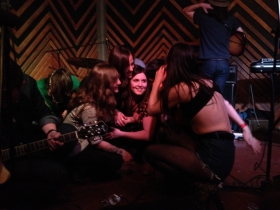