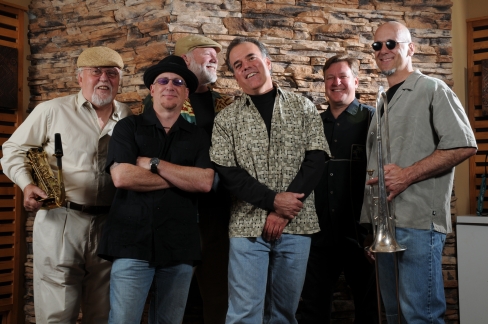 Primitive Culture is a highly eclectic band whose music mixes reggae, funk, Latin and blues music.  Its experienced musicians have united for one purpose: “to create a unique blend of Funk, Blues, and Tropical rhythms that warms the soul and moves the feet,” as the band’s website notes. They perform at this week’s Jazz in the Park, Thursday at 6pm in Cathedral Square Park.

David Hecht, who plays guitar and vocals, hails from south Texas, an area saturated with tex-mex swing, mariachi and Latin music as well as 60’s and 70’s funk and rock music. He moved to Madison, Wisconsin at age 14 and graduated from UW-Madison. He also performed with Bruce and Don Neviaser in their band, Harold and the Rhinos, during that time. He eventually formed the popular touring act known as JAVA, which opened for such notable acts as Elton John, the Pointer Sisters, Dr. John, the Neville Brothers and Los Lobos. After eight years of playing in JAVA, Hecht traveled to and lived in Latin America to hone his skills as a solo performer. He then traveled to Colorado to perform at ski resorts in the Rockies. In 1998, he returned to Madison and assembled the band we know today as Primitive Culture.

After perfoming with Hecht as part of Harold and the Rhinos, Bruce Neviaser became part of Primitive Culture as the band’s bass guitar and vocal performer. Jerry Neviaser, the band’s drummer, was one of Hecht’s earliest jamming partners and previously performed with the electronica project, State4. Greg Marsh occasionally drums for the band.

Phil Lyons rounds out the band with his combination of percussion, horns and vocals. He has performed with a large variety of bands including Tony Brown, Clyde Stubblefield, Freedy Johnston, Firetown, The O’bros and Emmettville. He returned to Wisconsin from New York in 1984.

For a sample of their music, checkout this YouTube video.

Hecht responded to our questions via email.

David, Jerry and Bruce met in high school! Learned the ropes together! Bob and Phil are highly sought after session players in Madison.

How did you get involved in Jazz in the Park?

John Ertl used to book Java and heard the buzz about Primitive Culture so he booked us!

Too many! Bob Marley, Santana, Van Morrison, Dylan, The Beatles, lots of Latin and Jazz.

Hybrid – taking a little from all of these styles.

Musically thriving but it is hard to “make it” – especially for jazz players.

With tact and humor!

Too many to list! Mainly playing for huge crowds, opening for some major stars, etc…

Mistakes? Never! Its all part of the adventure…

On the lake, in front of thousands of dancing folks at summertime outside venues!

How is performing your music different from playing other genres?

Great! Would love to be here more often!