Winners of Rainbow Dance Competition in 2013 and 2014, the group marries African music and dance. 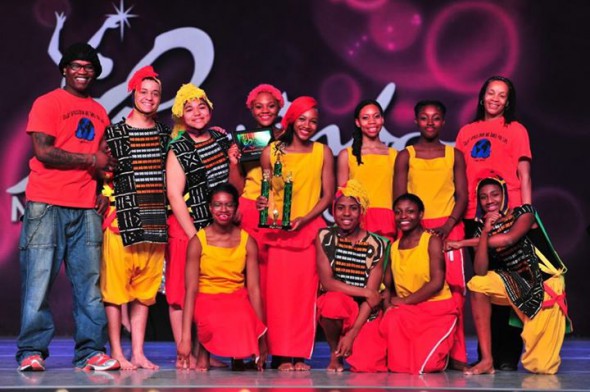 Xalaat Africa Drum and Dance for Life. Photo from Facebook.

Xalaat Africa Drum and Dance for Life was founded in 2010 by Yaya Kambaye. The group specializes in African and Carribean dance and music. The group is led by Kambaye, a native of Senegal, West Africa, who is a master drummer and kora player drawing on Senegalese traditions. Its other leader is Roxanne Kess, who is on staff at Marquette University.

Xalaat has long been connected to Milwaukee High School of the Arts, which in turn has had a dance program for decades. Its dance majors have performed in the Xalaat group.  Xalaat’s dancers were champions of the Rainbow Dance Competition 2013 and 2014.

The group’s mission statement is to train and maintain a youth ensemble in African-based dance and drumming for performance and competition, provide artistic experiences and promote physical well-being through arts education. The ensemble focuses on African, Contemporary African, and Liturgical dance forms.

On Tuesday August 4th, Xalaat will perform at the Peck Pavilion for the Marcus Center as the second of four dance groups featured this summer. Kess answered a few questions about the group.

In traditional African dance, the music and the dance have the same name and the same purpose within the society. The genre is very culture specific.

Who is responsible for the choreography?

The Ensemble rehearses one day per week at Milwaukee High School for the Arts.

Have you performed at Peck Pavillion before?

No. This will be our first performance at Peck Pavillion. We are very pleased to be a part of the series.

Can you tell us about the background of Xalaat’s leaders?

Yaya Kambaye is the Founder /Director and Drum Master of Xaalat. He is a native of Senegal, West Africa where he was reared in the traditions of dance, drumming, and Kora music. He is currently on staff at Marquette University Dept. of Performing Arts and works extensively throughout Milwaukee Public Schools.

Roxy Kess is the Dance Instructor and Choreographer of Xalaat, with an MFA in dance from UW-Milwaukee. She has studied with artists from Cuba, Haiti, Trinidad, Puerto Rico, Brazil, and Africa. She is currently on staff at Marquette University Dept. of Performing Arts and Milwaukee High School of the Arts.