It’s like a neighborhood restaurant with classic southern Italian food. 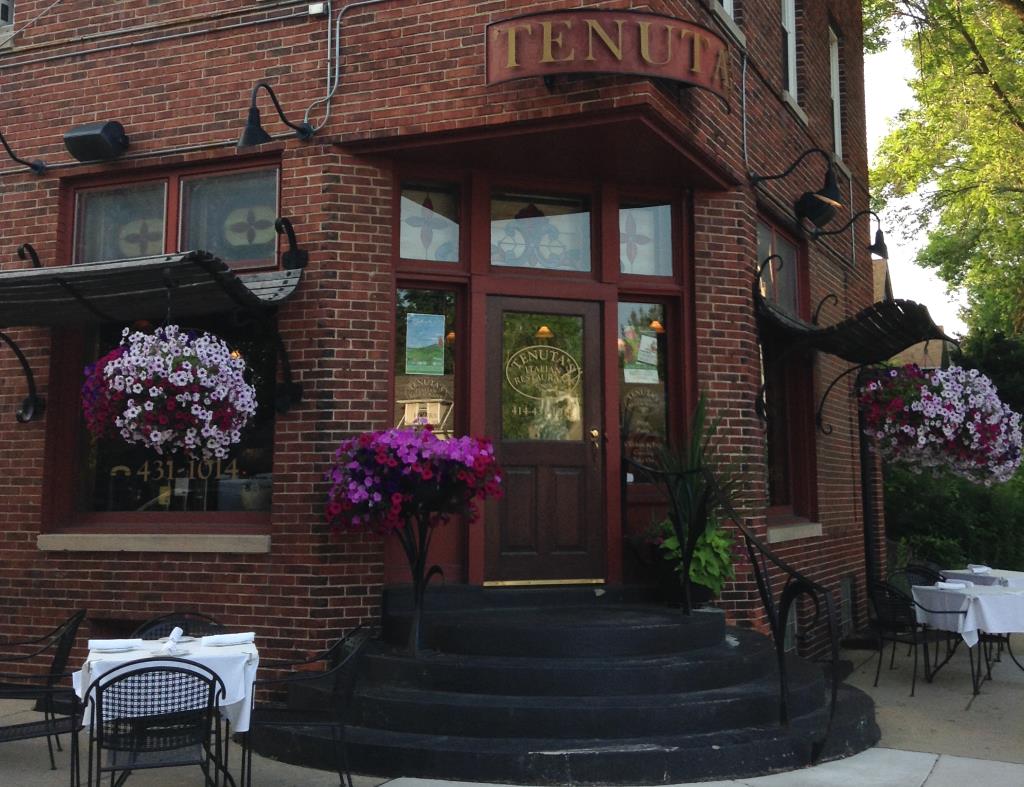 People often ask, “What is your favorite Thai, Mexican, Indian restaurant?” and I throw out Thai-namite, or El Canaveral, or Tandoor. But if someone says “What is your favorite Italian restaurant?” I go blank. There are many, Zarletti, The Pasta Tree, Onesto, too many to list. When I think of Italian food my brain returns to Nob Hill and Russian Hill in San Francisco where small neighborhood restaurants hug corners and cable cars chug up and down those hills. They were my favorites, not just the food, but the intimacy.

Then I found Tenuta’s, a small Italian restaurant on an unobtrusive corner on Clement Ave. in Bay View. Diners won’t find Tenuta’s on a drive-by, like the restaurants on KK; they have to know it’s there and seek it out as I did recently. It was easy to spot with its hanging flower baskets and outside tables looking elegant with white tablecloths covered with butcher paper and white napkins.

Frank Tenuta opened the restaurant in December 2003 with recipes his parents Cesare and Antonio brought from southern Italy in the early 60s. Another branch of the Tenuta family owns the grocery store/deli in Kenosha, but there is no business connection between the two.

Tenuta’s is small, yet my friend and I never felt crowded. We noted several solo diners at the bar who chatted with the bartender and lingered with a book or newspaper. “This really is a neighborhood restaurant,” my friend said. “It’s cozy.”

We started dinner with a split of the calamari. It came with two sauces, the marinara, delicious, and a remoulade which edged toward bland. The calamari left no doubt about itself. The lightly battered baby squid reminded me of eating grasshoppers in Oaxaca when I could clearly see each little leg. “It’s light,” my companion said as she chewed on one of the tiny tentacles. “It wasn’t waiting around to be served. It’s fresh and crunchy.”

I tried. My taste runs more to larger rings, so I don’t have too much visual information about what I’m eating. My friend, who grew up in Milwaukee’s Italian Third Ward, polished off the order and said, “Delicious. I like chewy, fishy tasting tentacles. Must be in my DNA.”

Because I’ve cooked broccoli rabe with minor success,  I ordered Rapini, which blended Italian sausage, broccoli rabe, olive oil, chili flakes, and orecchiette. I knew Tenuta’s could do it better. The sauce had just the right amount of heat from the chili flakes; the rabe was slightly bitter, as it should be, and tender; the ample pieces of Italian sausage added even more heat; the buttery olive oil sauce was just right.

If I found a flaw, it was the ratio of pasta to sauce. Each little orecchiette or “ear” is meant to cradle sauce, but in this dish too many ears came up empty. It’s not necessary to fill the bowl. How about less pasta and more of that yummy sauce?

We found the same issue with the Pollo, braised chicken thigh, ragu, gnocchi, and romano. Again, there was too much gnocchi for the sauce, about which my friend said, “It’s good but I would like more thigh.” We agreed that the quality of the gnocchi was uneven. “Some taste like little pillows, others are starchy or gummy,” my friend said as she cleaned out all the gnocchi in her bowl. 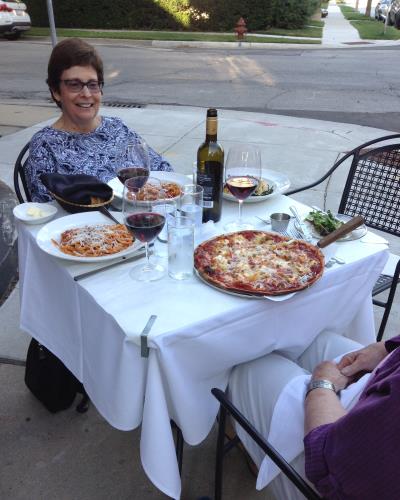 On a second visit, we ate al fresco on the sidewalk at the corner of Clement and Manitoba. “I feel like we’re really in Italy,” my friend said, as a fat cat appeared and sniffed around our table. We noticed almost everyone left the restaurant with a doggie bag — suggesting the portions were generous and the food too good to leave behind.

From the Antipasti, we ordered Arrancini, deep-fried risotto, peas, fontina cheese and marinara, and from the Insulate, Caprese, roma tomatoes, fresh mozzarella, basil, and balsamic. I found the risotto tasty, if slightly heavy with rice and not enough peas to add character and texture. My friend with the Italian DNA said, “It needs some chopped meat. It’s a little too starchy.”

It was hard to share the caprese. Not only was it beautiful on the plate, the large slices of heirloom tomatoes were juicy and flavorful, a perfect summer salad.

Zuccha, or butternut squash ravioli with kale, surprised us. This was no ordinary ravioli, but instead, half a dozen giant pillows resting in a puddle of  brown butter covered with crispy kale. “Ravioli on steroids,” my friend said. To make the dish even more interesting, the chef pan-seared the ravioli to match the crisp kale. Some added butter and pureed butternut squash put this entrée in the winners circle.

The Diavola Shrimp, — calabrian chili, tomato and orecchiette– got mixed reviews, only because it had a lot of heat. At first the comment was, “Just enough spicy. It doesn’t take away from the other flavors.” The spicy hot escalated until my friend conceded, “Too hot.” On the plus side, unlike my Rapini on an earlier visit when some of the little ears came up empty, this orecchiete had enough sauce to fill every ear.

We shared the Diavola Pizza, with pepperoni, giadiniera peppers, mozzarella and cream cheese, pineapple and pizza sauce, and all agreed with the one who said, “I’ve never had a pizza like this. It’s so good.” In an unusual twist, diners can order their pizza thin crust, virgin (similar to thin, just slightly thicker), deep dish, or stuffed.

I had to sample the least unusual but classic dish, Bolognese, with its slow-simmered meat sauce, buccatini, and romano cheese. Because the creamy meat sauce clung to each strand of buccatini, I tasted sauce in every bite. “It tastes just like what your Italian gramma would make,” someone said.

As we left, we stepped around that same fat cat lingering on the front stoop. “Lost cat?” I asked a server who had stepped outside.

“Oh him. We call him Simon. He’s always around here looking for a handout.” A gourmet cat. 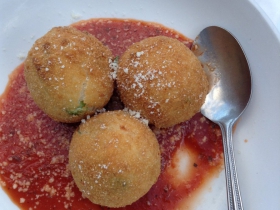 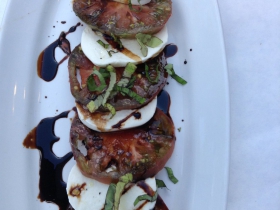 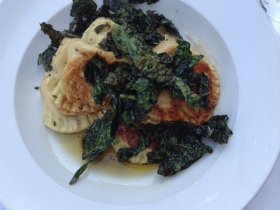 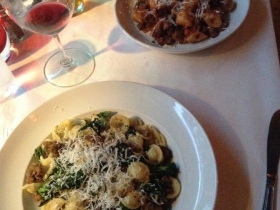 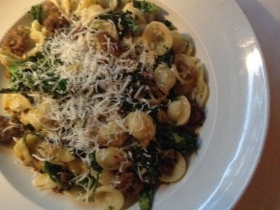 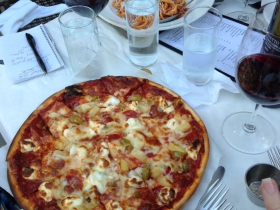 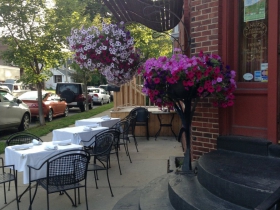 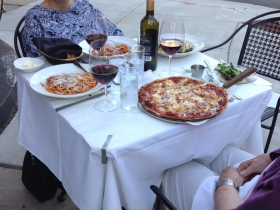 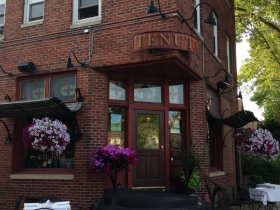