After 17 years of entertaining audiences, Danceworks performs for first time at Peck Pavilion. 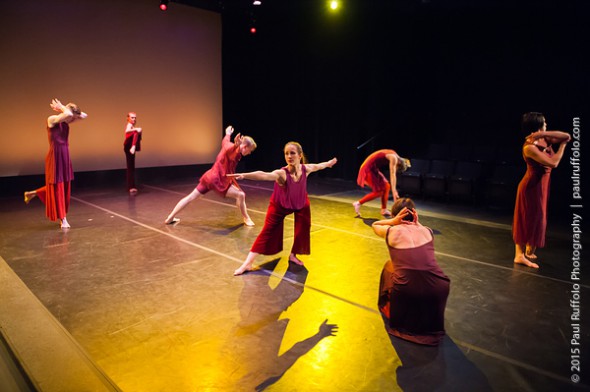 Danceworks, a veteran Milwaukee company, has given many performances, but this Tuesday, July 28th, will be its first time at Peck Pavilion, the outdoor stage at the Marcus Center for the Performing Arts. The group’s mission, as its website notes, is to create “contemporary dance that is physical, virtuosic, entertaining and honest.”

Kim Johnson, Artistic Manager of Danceworks, notes that the company is now in its 18th season, and has always thrived on interacting with other artists. “Collaboration fuels the creative vision of company members,” she says, and they “regularly work alongside guest artists including musicians, poets, visual artists, actors and choreographers.” The group, she says, also strives to make its work “relevant and accessible” to a wide range of audience members by teaching workshops and doing residencies in diverse communities throughout southeastern Wisconsin. We had some questions for Johnson.

How and why was Danceworks created?

Danceworks Performance Company was founded in 1997 by a group of talented young dancer/choreographers who spilled from the halls of the UW-Milwaukee dance program and onto the Milwaukee dance scene. First, they had been trained by the faculty of the UWM dance program (Marcia Ruth Parsons, Ed Burgess, Janet Lilly and Ferne Caulker) as well as a series of stellar visitors to the program. They also shared an interest in staying in Milwaukee to create and perform their own work. Finally, they envisioned a company of dancer/choreographers, a highly trained ensemble that supported several distinct voices within a shared aesthetic. The Danceworks board of directors invited Sarah Wilbur to become the artistic director of DPC, the first contemporary dance group to emerge in Milwaukee in over a decade.

Less than a year after DPC’s debut, Dani Kuepper became a member of the new company, immediately establishing herself as an up-and-coming choreographic talent. After many years of collaboration, Sarah Wilbur and Dani Kuepper became Co-Artistic Directors in 2006, sharing choreographic responsibility and artistic vision. Since Wilbur’s 2007 move to the west coast, Dani Kuepper has taken the reins of leadership as the Artistic Director. Since its inception, DPC has been performing to critical acclaim.

Danceworks on Tap is Celebrating their 15th season. Danceworks Education Director, Amy Brinkman-Sustache, the lead tap teacher, saw the need for tap performance in the community and out of many requests and performaces, Danceworks on Tap was created.

The other groups that will be performing, Revamped and Mezclando, are a part of our DanceLAB. The Danceworks DanceLAB honors and nurtures the development of new dance works by emerging and established dance artists by offering year-round opportunities in the form of performances, internships, mentorships, space access and advocacy for artists serving the Milwaukee community.

What kind of gigs do you generally do?

Danceworks Performance Company has a formal season that consists of three shows. We strive to remain inventive and collaborate with other artists in town.

Danceworks on Tap has many outreach performances upon request and has 1 annual show a year, which is presented during the DanceLAB Summer Series. A Milwaukee-based hip hop dance company, Revamped has been a part of DanceLAB’s hip hop dance only showcase, Ignite: A Hip Hop Dance Experience. The performance is in its third year and is running, August 29-30 at Danceworks Studio Theater.

Music is chosen by the choreographer and sometimes provided by a composer when collaborating.

Is there one person in particular who leads and choreographs?

Both Danceworks Performance Company and Danceworks on Tap has an artistic director that choreographs on the company, but the dancers too choreograph and have input into the pieces that are set on them.

Danceworks Performance Company (DPC) rehearses about 10 times each week during the season, September-June. Revamped rehearses at Danceworks 3 nights a week. This is possible through a Space Grant we give them.

Where did the love for dance come from in this group? Were most Danceworks members dancers all their lives?

All the dancers in DPC come from a variety of backgrounds and levels of dance training. Some started at age 3, where others started when they got to college. This is something that makes the group unique. Everyone brings something different to the room and that difference is respected and showcased.

So you have never performed at Peck Pavilion?

No, this is our first time and we are thrilled to be a part of this exciting summer series.

How do you connect/engage with the audience?

Firstly, we make work that is honest, whether it is light-hearted or dark. Secondly, most  company members work with the community on a daily basis through teaching at Danceworks or UWM. The relationships created in the studio and classroom transfer to the stage. Lastly, we don’t take ourselves too seriously. We are okay with not knowing. We are willing to working collaboratively and playfully and in working that way, real relationships, trust and friendships are built. The audience can feel this and it brings another layer to the performance that lets them in and connects and relates.

Is Milwaukee a good city for this kind of entertainment?

Milwaukee has many artists from all different areas of the performing arts that interested in collaborating with others. We’ve been fortunate to work with many of these artists and our work has only been better because of it. These new shows have been very well received by audiences and have introduced many Milwaukeeans to modern dance. Like the architecture of Milwaukee, we embrace and respect the classics, but are intrigued and inspired by the new and contemporary.

Is there a following for this kind of performance?

Yes. The four companies that are performing (at Peck Pavilion) all have a loyal following. What I love about the mix of dance companies being presented at the Marcus Summer Series performance is that the audience will get to experience four different genres of dance in one show. This mix of performers is very rare for Milwaukee.