A little ersatz, perhaps, but still fun, as our photos show.

The usual sea of people flooded the lanes of the Henry Maier Festival Park on Sunday, chowing down on fried foods and guzzling beer. It’s summer in Milwaukee and that means another sunny afternoon of festivities at the festival. But this time, a recreation of the Trevi Fountain and Michelangelo’s David greeted festival goers as they entered the grounds, telling us that the weekend was devoted to Festa Italiana.

And Festa-goers had no shortage of things to do at the fest. In a big field right outside the main gate you could catch a game of bocce ball. You might have even ended up playing against a formidable group of nuns. The Cucina Showcase housed a variety of spice and food shops from the Public Market. There were also live cooking demonstrations, including appearances by celebrity chef Rossella Rago, a kid’s pizza-making contest and a cannoli eating contest. Those looking to take advantage of both the weather and the big, blue beauty of Lake Michigan were welcomed to go on a gondola ride along Lakeshore State Park.

It’s not a festival in Milwaukee without a little live music, and Festa delivered for the most part. Right next to the main gate, you could find the Jazz Stage, which featured the most popular names from the Italian Community Center’s “Courtyard Jazz” series, including Kim Marie, Sandra Mandella, and Janet Planet all accompanied by the Tom Sorce gand. But the highlight was listening to the beautiful serenades by members of the Florentine Opera Company. I didn’t know half of what they were saying, they could have been singing about Cadbury Crème Eggs for all I know, but I still loved it.

The usual venues at the park were also open to many different bands. Headliners included Dove C’é Musica – Tribute to Eros Ramazzotti direct from Italy, Ray Massa’s Eurorhythms, and “the new crown prince of swing,” Louis Prima, Jr. and the Witnesses. I especially enjoyed the sound of Henry Prego, who emulated the classic song style of Frank Sinatra. The music overall was good, but I would rather have had more original bands and more authentic Italian music; most of the bands were either tributes or just played covers of top 40s music.

A lovely trio of musicians right outside the main gate gave couples the opportunity for impromptu slow dancing. A group of lovely Italian dancing ladies invigorated us with a spirited dance despite looking exhausted in the blazing sun. They even invited others to join them.

Of course, there was plenty to eat. The crunchy-on-the-outside, chewy-on-the inside eggplant strips from Venice Club has become a festival tradition for me and my family. I also tried the spinach and cheese calzone from Angelo’s Pizza, which was a bit too salty and greasy for my tastes. Ending things on a high (and sweet) note was the brioche (Italian ice cream sandwich) from Gelateria Italiana. Call me crazy, but hazelnut gelato in a sweet bread roll is a surprisingly good combination.

The best part of my day at the fest was the flag-throwing demonstration. One might think throwing a flag would be a simple task, but not so. A group of burly young men tossed their flags high in the air after a well-placed drum roll and then proceeded to conduct an elaborate choreography of flag passing and tossing. At one point, a man flipped flags around his neck and legs. It was powerful, fun, and perhaps the most authentic thing at the fest.

A smaller-scale recreation of the Leaning Tower of Pisa made of paper stood in the middle of the park. While it looked imposing, the way it flapped in the wind ruined the illusion. Which might be a pretty good analogy for the fest as a whole. While it didn’t quite feel like Italy, it was pretty darn close at times. And often a joy.

Our photo gallery captures the fun. 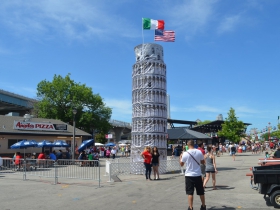 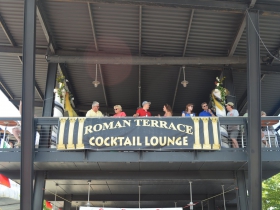 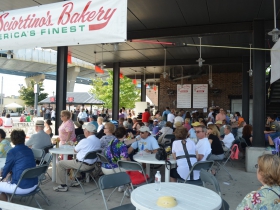 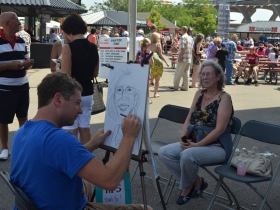 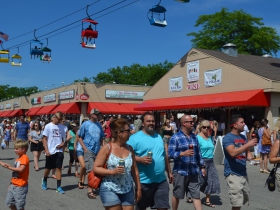 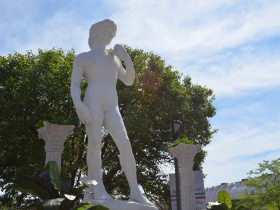