Nessun Dorma Is Great For $2 Beer

Riverwest Stein and a Czech pilsner are $2 seven evenings a week. Good food, too. 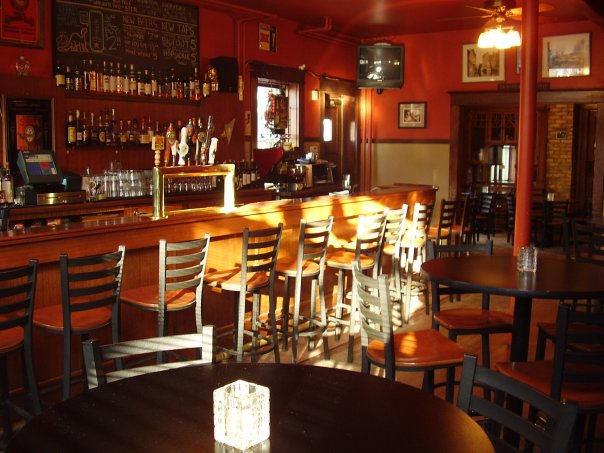 For as long as I can remember, and particularly since I started hanging out in Riverwest, Nessun Dorma (2778 N. Weil St.) has been a mysterious corner haunt. Nestled onto a side street between Locust and Center streets, Dorma was plagued by construction in the Fall and Winter. Now that Weil and Hadley streets are freshly paved and free of cones, it’s a great time to stop in and experience a hidden gem with a generous happy hour that runs all week.

The intrigue of Dorma was unveiled to me on a Monday evening one especially sweltering day. It was humid and 85 degrees, which made it feel well over 90. Dorma’s air conditioning and dark wood interior transported me to cooler days spent in a hip Venetian bar. Dorma serves Italian food and its decor is Europe meets Riverwest. They have vintage images from the Old World as well as music tour posters from the 2000s. Decades ago the location was home to Gordon Park Pub, which holds the distinction of being the first bar to tap Lakefront’s Riverwest Stein. Back then the Klisch brothers were brewing in a small house nearby and it was easy to roll their kegs over. To this day Riverwest Stein (RWS) remains one of the two permanent taps (the other being Straropramen, a Czech pilsner), which are $2 during happy hour (4 p.m. to-6 p.m., seven days a week).

In the late 90s and early 2000s Dorma’s building housed the Stork Club, which was one of the venues where the local hip-hop scene convened. I was an unaware high school kid exclusively attending national acts at The Rave, but my girl remembers rowdy hip-hop nights at the Stork Club when she was a college student at MIAD. She still has a handmade cassette tape from that era with a track by local legend Kid Millions. Today Nessun Dorma only serves cold beverages and hot food, but their alternative rock soundtrack on Monday set a fitting mood for happy hour and dinner.

Aside from the $2 RWS and Staro taps, the rest of Dorma’s happy hour includes $3 rail mixers, $2 cans of Point beer, and $5 select glasses of wine. Considering their phone number is 414-264-VINO, you can assume they have a nice selection of the stuff. By the bottle Dorma has 19 reds from France, Italy, Spain, Uruguay and the U.S. They also have 7 reds by the glass, 5 bottles of white (7 by the glass), 2 bottles of sparkling (2 by the glass), 4 aperitifs and 4 dessert wines by the glass. The wine selection changes regularly and the tap beers change weekly. Currently they have Bergoff Pilsner, Capital’s “Supper Club” Lager, Coronado “For Days” Session IPA, Epic Hopulent Imperial IPA Nitro, Lake Louie “Blue Peter” Dortmunder, and North Coast “Blue Star” Wheat Ale.

In addition to their friendly week-long happy hour Dorma also has $1 off whiskey Mondays, $2 RWS all night Tuesdays, $1 off wine and a pasta food special on Wednesdays. After ordering a round of $2 taps and a $5 glass of wine I had to ask for olives. Their special bruschetta was feta, mint and watermelon, an odd mix that worked wonderfully. Given that I was comfortable and cool inside I tried their homemade curried zucchini soup, which hit the spot. My dinner date ordered the beef tenderloin panini with a side salad that features their house balsamic dressing, my new favorite. A few weeks ago I got a delicious panini at Scardina Specialities (822 E. Chambers) for the first time with Kiran Vee of New Age Narcissism. Think of Dorma as Scardina but with a big selection of booze in a more casual and romantic setting.

Despite their phone number and Italian eats, the main “divas” (Nessun Dorma is named after an opera aria) here are the beers. During happy hour it’s impossible to beat the $2 RWS and Staro, but their beer menu has a large, unique selection of craft and imports. Highlights include the Grimbergen Dubbel Abbey Ale, Destihl’s Gose Wild Sour, Atwater’s Dirty Blond, Skullsplitter Scottish Ale, and many New Glarus beers including the new Berliner Weiss. They also carry O’mission gluten-free lager and pale ale. Before ending our evening at Dorma we went outside into the heat, which had subsided a bit by then, to sit at one of their tables out front and enjoy a refreshing $5 Dutch Mule, served in a copper cup and made with New Holland Clockwork Orange liquor, Hatter Royale Hopped whiskey, Ginger Beer and lime. A little cool, a little heat, lots of good food and drink, all in a summer’s eve at Nessun Dorma.

Nessun Dorma opens at 4pm for drinks and dinner service begins at 5pm.