The executive chef at McBob’s never planned such a career, but loves food, the job, and the fast-paced action. 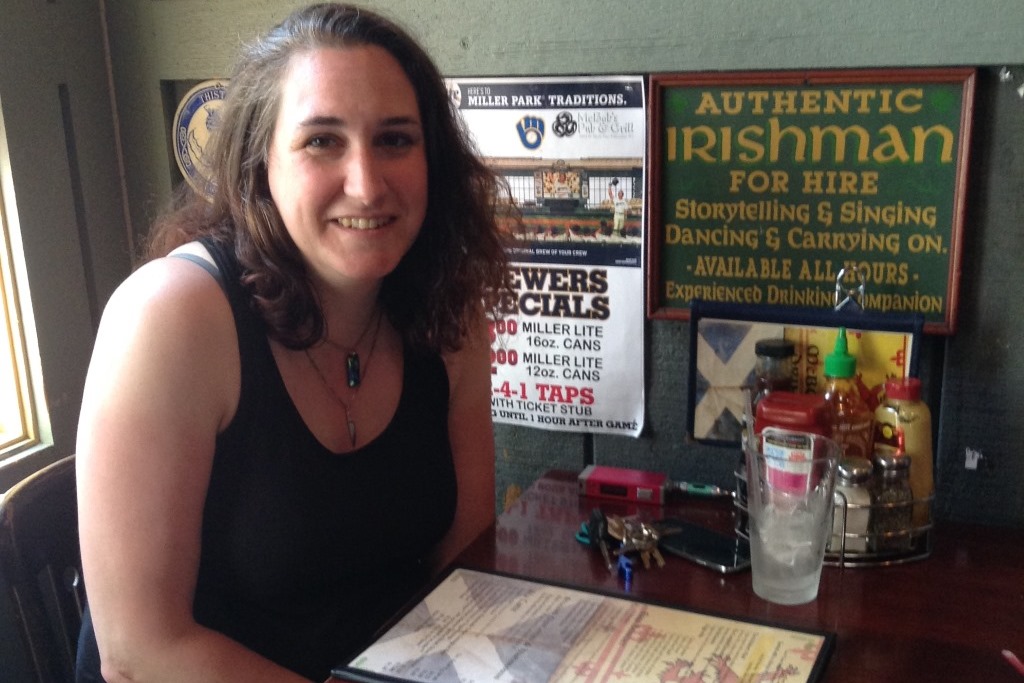 Shanah Kaiser is Executive Chef at McBob’s Pub and Grill (4919 W. North Ave.), but didn’t exactly have a plan to get there. “I literally fell into it,” she says of her chef career.

I met Kaiser at the Milwaukee Public Market where she taught a class on making hors d’oeuvres, “Mad Men” style, aka vintage 1960s. As she stirred the Door County Cherry Meatballs, caramelized the onions, monitored the cupcakes in the oven, and fried potato slices, all at the same time, I saw a chef who loved what she did. Her joie de vivre led me to interview this exuberant and talented master of the kitchen. And so, while she multi-tasked, Kaiser answered questions and told stories about her cooking career.

Her career began in an unorthodox way in Door County where she worked as a server at a supper club. “One day the owner pulled me aside and said, ‘Let’s try you out in the kitchen’ and that’s where it all started.” When he said to her, “Maybe you should try cooking,” something clicked. Two years later, Kaiser was running the kitchen.

She moved on from the supper club to several different restaurants and eventually settled at The Inn at Kristofers in Sister Bay, where she worked the line for five years except on Sunday when she took over the grill.

By this time Kaiser had two young children, needed day care, and couldn’t find a place to leave the children that had hours to suit her restaurant lifestyle. She moved to Milwaukee, ran the lunch program at Hillel Academy in Whitefish Bay, and started a kosher catering business using the skills she honed at Hillel cooking kosher lunches.

She credits her mom with teaching her about flavors and recipes though their modus operandi differs greatly. “My mom can spend six hours making an apple pie. She doesn’t want to feel any stress when she’s in the kitchen.”

Kaiser, by contrast, thrives on the hectic, non-stop balancing act that’s required as orders from the dining room pile up. “I love the stress of it, the fast pace when everyone is working as a team. I work better under pressure. The biggest difference between cooking at home and cooking in a restaurant is that when you’re on the line you have to be quick and constantly multi-task.”

A year ago she met Cristine McRobert’s, co-owner of McBob’s, who offered her a job. At this time her catering business was thriving, but Kaiser knew it was time for a change. “I wanted to get back in a restaurant.”

After complying with the restraints of a kosher kitchen at Hillel, as well as her mainly kosher catering business, she was delighted to work in a kitchen with no dietary restrictions. “The first week I was literally jumping up and down because I was asked to cook ten pounds of bacon.”

During our conversation that wandered from Kaiser’s favorite comfort food, bacon of course, to tacos at McBob’s, we got to talking about kitchen disasters and she had a good one.

While prepping for a catering job, Kaiser was preparing a layered casserole that required something heavy to compress the veggies while it baked in the 400-degree oven. She and her assistant placed cans of apple juice on the layered veggies, not an ideal solution, but enough extra weight to get the job done. “Fortunately we were out of the room when it happened. The cans exploded, blew out the oven door, and sprayed boiling hot apple juice all over the kitchen. Someone could have been badly hurt.”

At McBob’s, known more for corned beef sandwiches and tacos than fine dining, Kaiser’s favorite dish to prepare is anything with fins. She orders the fish on Monday, decides what to do with it on Tuesday, and serves fish specials on Wednesday and Friday. “I love creating different recipes with fish, like the recent Blackened Trout Special with corn and black bean relish and potatoes.” She turned the beans and potatoes into a hash, topped the hash with blackened trout and served it with Siracha cream sauce.

As for those tacos, “They have to weigh exactly one pound. When I started here I had to weigh every one but now I just know.” Those one-pound tacos are available at the restaurant Tuesday, Thursday, Saturday, and Sunday. Occasionally, I’m told, the line for them goes out the door and down North Avenue.

Since Kaiser is a single mom with two children, a boy aged 10 and daughter aged six, I asked what she cooks at home. “I make a lot of chicken fingers, mac and cheese, ramen, and pasta.” But they don’t come from a box or out of a package in the freezer; she makes those kid-friendly meals from scratch, even the ramen.

Most of us don’t have the skill or imagination to go to the kitchen, check out what’s in the pantry, and from random ingredients create something delicious. That’s what Kaiser does at the restaurant. “I go to the cooler to see what’s there. That’s where I get my inspiration. If I find walnuts for example, I’ll figure out how to use them.”  She takes the mystique out of cooking when she says: “Anyone can do it. It’s not that hard, especially if you’re lucky and have a good palate.”

But maybe it’s not quite that simple? “Yes, it’s also an art. I like to create food that makes people happy, flavors that make people smile.”