Kruz, a Tavern on the Docks

Near the lake, the RR tracks and a scrapyard, with one of the city's finest patios to take in the scene. What are you waiting for? 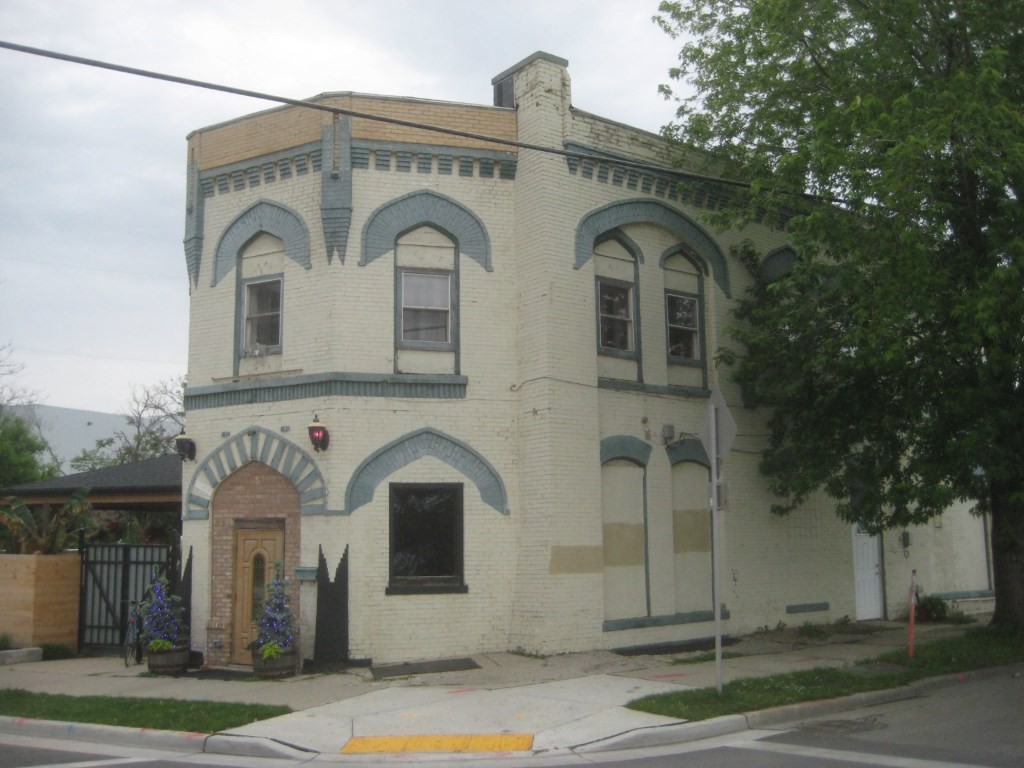 With the news today that the Supreme Court has legalized gay marriage, Bar Exam visits Kruz, a popular establishment for gay folks, married and single.

In 1977 a real estate listing for this old bar gushed that it was a “super business for a tavern located across the street from the docks.” Talk about making lemonade when life hands you lemons! Back then, the “docks” was hardly considered prime real estate, and even today the Harbor View neighborhood is hard to see, unless you know where to look.

In this case, the super location is at the eastern foot of E. National Ave. where the old street begins its 30 mile run west-southwest to the Fox River in Waukesha County, where it terminates. To the east, S. Water St. runs through the neighborhood, where many large warehouse buildings await redevelopment. Head east of Water St., as some have done, and you will find yourself in Lake Michigan. The Horse Barn is the next neighbor to the west, and the Wherehouse tavern is the only other bar in the immediate area. There is no sign on the building housing Kruz‘s, yet from the architecture it is easy to realize it has always been a bar.

The place has been known as Kruz only since November, 2006, and the largely levi-and-leather gay bar was once one of many in the area, which had little else to offer other than solitude and privacy, and those elements were much in demand in the early gay area. If you were down here, you were down here for a reason, and not sightseeing, or looking for a trendy new restaurant like Blue Jacket, now ensconced in what was once the Triangle Bar.

Kruz was built in 1899 as a “store and flat” for the Pabst Brewery at a cost of $4,500. In 1916 a metal garage was erected on the 3,347 square foot corner lot. It was joined by a wood coal shed in 1929, so this site was not exactly a beer garden in those days. That would have to wait until decades passed and after the new owners, Serge Pellicelli and Jerry Breiling took over — with a vengeance.

Today, Kruz is as much of a garden spot as is any tavern in the city, and even if you don’t go inside the place, you can have a rather complete party right outside. A very attractive wooden shelter was constructed to the west of the building about five years ago, partly in response to the state ban on smoking indoors. (The metal garage and wood coal shed are long gone.) The structure is of the quality you would expect to find in a state park, not a dockside gay bar. Earlier this year, the patio surrounding the shelter was considerably expanded. It is bordered by tropical plants that weather the winter indoors and come remarkably to life in season, as does the patio itself with its comfortable seating and ample heating sources, which include flaming patio tables filled with pebbles. The wood fence has a significant iron superstructure, which can be opened to the parking lot beyond for parties and special events.

There are two portable toilets, locked, that remain on site year round, just in case a festival happens to break out. You never know when the Castaways Motorcycle Club might come roaring up to the door.

Inside, the bar is one main room, with two small alcoves with gaming machines. A key feature of the tavern is a pool table. Folks take their billiards seriously here — there is a chalkboard for reserving your place. No putting quarters on the table. For a place that is not a dance club, there is elaborate lighting in the bar, including little green spots that dance around the room in what must be a pattern of some sort, yet one I have never been able to figure out. So, I’ll just have another try and watch the lights spin. 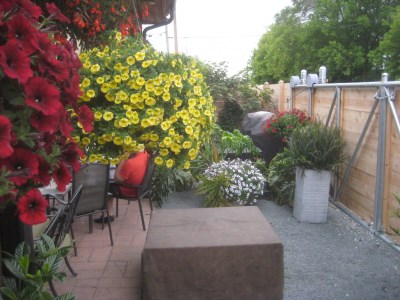 Entry to the tavern is via the patio, for the most part, yet the original corner entrance is still in use, and quite convenient to the adjacent bicycle rack. There are two small windows by the entrance, and one way up high, above the bar. In addition, there is a window by the patio entrance, but this place is not what you would call light-filled by any means, and the black paint that covers the ceiling emphasizes that point. The walls are of older knotty pine paneling.

Once your eyes adjust to the dimness, you will find yourself in the mix of folks ranging from ready to motorcycle to just off work at the bank and primed for a drink. This is not the place for drag queens (try Fluid for that) or young men eager to test the limits of their morality (La Cage takes that honor), but it does accommodate folks from a wide array of backgrounds and interests.

In 1934, with the dawn of repeal, a fellow named Simon Osep got a license to run the place as a Tavern Dance Hall, admitting that this had been its use during Prohibition.

In 1951, Frank Ermic ran the place and lowered the ceiling in the tavern to 9’6″. (It’s mostly back to full height now.) That probably is when the paneling was installed.

Ermic kept his hands on the place for some time, and had Victor Gust operate it in 1970. Gust hung up a “Pabst — Food” sign above the door to attract the dock workers to his cuisine. The next year, James and Ora Annello ran it as a tavern, and in 1973 it took on the name of “Sail and Rail,” which was a fine name, and aptly descriptive of the location. (Railroad tracks still run along S. Water St. here.) For a while in 1974 Robert C. Garrett had the license to run the place as a tavern and restaurant, but when the inspector came by that year he found the building closed. “Very poor condition,” he noted after looking through the windows. “Plaster falling off walls and ceiling. Roof leaks badly. Could not be used as a tavern as of this date.”

In 1975 Ruth Drozewski operated the place, followed in 1976 by Elizabeth Schermer. Then Peter and Diane Djukic ran it as a tavern in 1978 before surrending it to Kenneth Allen Warichak who served food and hung an Old Style sign above the door in 1979 reading “Kenny’s Sail & Rail.”

By 1995 it was in one of its occasional periods of vacancy after Gaetano Puccio opened it as Scallywag’s Pub and Grill, with a capacity of 80. I’m not sure what type of cuisine was dished up for the dockworkers, but the restaurant reviewers overlooked the place, that’s for sure. The customers back then weren’t exactly the eating type.

It later became the Firehouse Bar, operated by some Milwaukee firefighters, and had some nice memorabilia. Then it became South Water Street Docks, and then Gargoyles until the current owners took over in 2006.

The bar runs for most of the length of the west wall of the place. Patrons face a mirrored wall featuring the hard spirits that seem to be the customer favorites. The walls are delightfully un-blighted by beer and liquor posters. You can play dice here, and the place even features a shut-box dice game, with its own little attached light so you can see your score. Your happy hour here runs from 5 p.m. to 7 p.m. When you order a drink during those hours, keep the receipt and redeem it for another. This is a lovely tradition among Milwaukee gay bars, and a powerful incentive to get here as soon as work is over. Renovations to both bathrooms this year were of the typically high quality of all improvements made to the place. Serge and Jerry are very much hands-on, and are not afraid to throw good money into the place. The neighborhood is much more likely to support this sort of investment than it would have even a decade ago when they bought the place.

This is not one of those gay bars that has succumbed to the craft draft beer craze; however there are occasional surprises in the bottle selection, including Sprecher Amber. 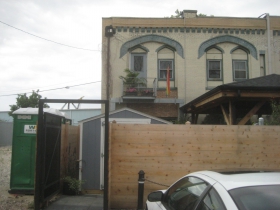 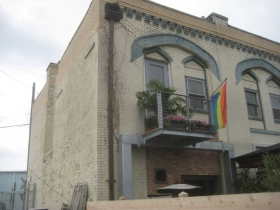 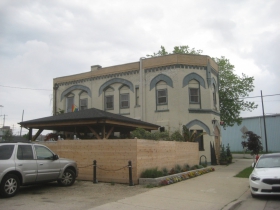 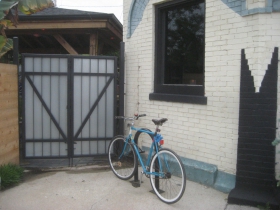 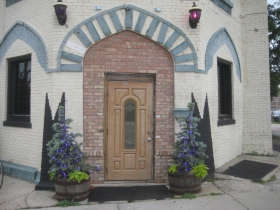 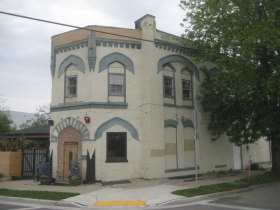 3 thoughts on “Bar Exam: Kruz, a Tavern on the Docks”