People can officially tell the United States and Canadian governments how well they’ve protected the Great Lakes from diversions, bulk exports and withdrawals before June 30.

The International Joint Commission, a binational agency that advises those governments on shared environmental issues, is collecting comments on its draft 10-year review of the issue.

Water scarcity and drought in the American Southwest have heightened the sensitivity of defending Great Lakes water, including talks of a national water policy.

In 1998, the Nova Group in Ontario proposed exporting more than 150 million gallons of Lake Superior water to Asia annually. The Ontario Ministry of the Environment approved the controversial proposal before word spread to the public, press or politicians. The water was never diverted.

Following strong anti-diversion pleas, the Canadian and U.S. governments asked the commission to examine the issue. The group released the first “Protection of the Waters of the Great Lakes” report in 2000.

The main recommendation prohibits water removal “unless the applicant can demonstrate that the Great Lakes ecosystems would not be endangered.”

This draft has new recommendations, including the need to focus on such issues as sustainable management of the region’s ecology and economics, climate change and diversions inside and outside of the Great Lakes.

The report is framed as a success story, championing the adoption of the eight-state Great Lakes Compact in the U.S. and a parallel agreement in Ontario and Quebec. [The compact prohibits diversion of water outside the Great Lakes basin, but makes an exception for any municipality in a county that straddles the basin divide. Since Waukesha County straddles the subcontinental divide between the Great Lakes and Mississippi River basins, the city of Waukesha is seeking to divert water from Lake Michigan. Waukesha is the first municipality in the U.S. located entirely outside the Great Lakes basin to request a diversion, but its application must ultimately be approved by all compact members.] 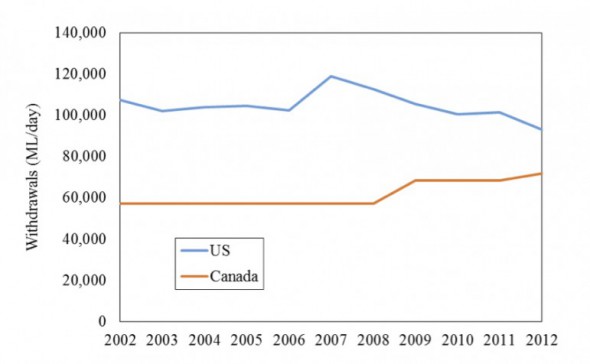 Total withdrawals for US and Canada in the Great Lakes-St. Lawrence River Basin reported for 2002-2012. Graph: International Joint Commission and Great Lakes Regional Water Use Database.

According to the draft report by Pentland and Mayer, no harmful diversions from the Great Lakes have been approved since 2000.

The draft indicates that water withdrawals from the Great Lakes watershed are declining in the U.S. but that trends are less clear in Canada.

In a public webinar, the Commission’s information manager, John Yee, said “it’s likely Canadian withdrawals in the Great Lakes Basin might really be flat over the past five years, if not declining.”

Despite the trends, the draft acknowledges needed improvements in water use monitoring, infrastructure, conservation and research.

It recommends large-scale collaboration among government agencies to “balance demands, human and ecological, against available supplies.”

You can submit comments online.

12 thoughts on “Echo: Water Diversion from Great Lakes Gets Review”