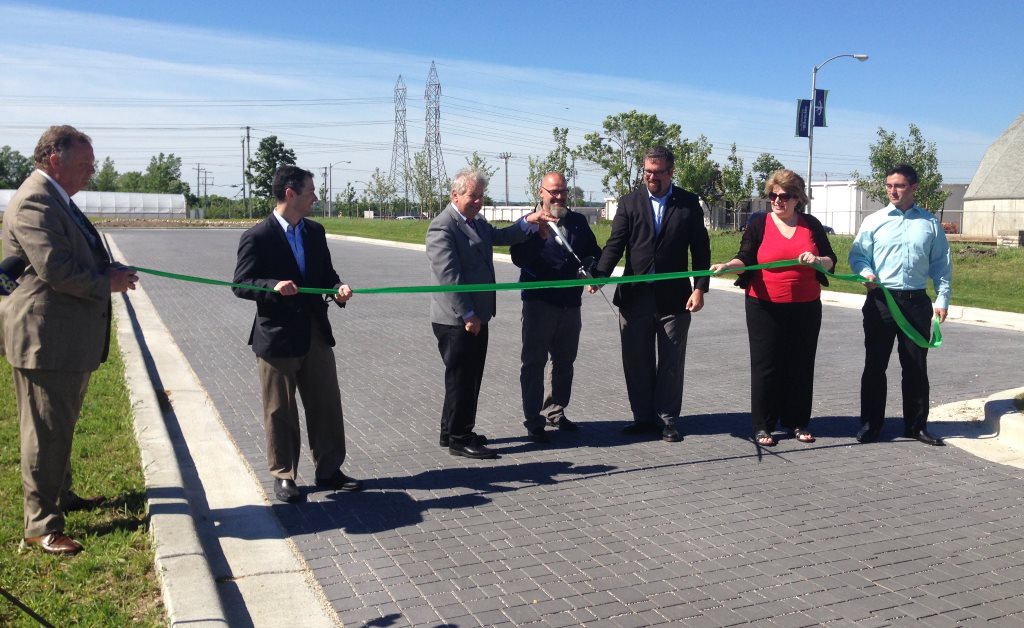 Green Corridor Chairman Bryan Simon about to cut the ribbon for the Urban Orchard and its permeable parking lot. Photo by Amanda Mickevicius.

Witkowski headed up the list of notables who gathered Friday morning to unveil a new Urban Orchard and permeable parking lot that will help water it, all located within the “Garden District.”

Garden District? Yes. Many may not be aware of this, but Witkowski’s entire 13th aldermanic district on Milwaukee’s southeast side is also known, or trying to become known, as the “Garden District.” There is even a Garden District Neighborhood Association , which “encourages business owners, residents and others to plant and beautify” to create “curb appeal” within the district, and has “run perennial flower exchanges, educational programs, done community plantings and inspired a rental garden plot site now sponsored by the UW- Extension.”

Well, now the Garden District has an Urban Orchard, a project that was unveiled at the ribbon-cutting ceremony at the corner of S. 6th and W. Norwich streets, just south of W. Howard Ave., where the orchard is located. It is comprised of 80 types of fruit trees including apple, pear, serviceberry, and plum. But the trees are just part of the orchard. The area is a “permaculture guild” – meaning there are other types of plants and vegetation surrounding the trees that work together in a system to support the growth of one another.

The permeable parking lot, adjacent to the orchard, operates like a sieve that allows for rain to seep through the pavement into holding tanks. The lot stretches 15,000 square feet, is composed of gravel and brick laid in a distinctive pattern, and permits passage of water into a 10,000 gallon, aqua-block harvesting system. The collected water is used to water the orchard. “To our knowledge, this is the first such sustainable urban orchard in Milwaukee,” Witkowski noted in press release. “I believe it could be used as a model that can be replicated to help grow healthy food in neighborhoods across the city.”

At the unveiling, he put it more succinctly: “This is the wave of the future, this is tomorrow.”

The Urban Orchard is located in the “Green Corridor,” a portion of S. 6th St designated by the city to serve as a fully sustainable environment for conservationist practices and education to the local community and other cities nationwide. In fact, national leaders from Philadephia, New Orleans, and Chicago have all come to see the green infrastructure as a model for urban sustainability. The Green Corridor is part of the plan by the Milwaukee Metropolitan Sewerage District and its Executive Director Kevin Shafer to create green areas in the metro area that capture rainwater where it falls, to reduce runoff into sewers that can overpower the system and its Deep Tunnel during major rainstorms.

Shafer and County Supervisor Jason Haas were also on hand for the unveiling.

In addition to the Urban Orchard and permeable parking lot, the Green Corridor houses community gardens, bioswales (landscape elements designed to reduce runoff water into sewer systems), solar-powered bus shelters and crosswalk signs, green roofs, and Milwaukee’s first solar flower, which is used to help power electricity used in the Garden District Farmers’ Market. Green Corridor Chairman Bryan Simon noted that five years ago this land was an empty lot. Simon said this project has “turned it into more of a neighborhood.”

The Urban Orchard is a collaborative effort made possible by a combination of private and public donations. No city tax dollars were used. The materials for the lot were donated as was volunteer time to help construct it. The sewerage district funded 50 percent of the project.

Witkowski talked to us about some of the future plans for the Green Corridor. The three crosswalks at the intersection of S. 6th St and Norwich Ave will serve as canvases for artwork. Painted drawings will fill the space between white lines on the concrete walkways. And raised flowerbeds will be installed, so that handicapped people restricted to wheelchair use are able to contribute to the community project.

In addition to The Garden Districts Farmers’ Market, which takes place on Saturdays between 1 and 5pm, there will be recycling events opposite the Farmers’ Market through mid-October. Once a month, a movie showing will be scheduled, and community members should also expect an art show and rummage sale this summer.