Food is authentic, dishes are all fresh-made and restaurant’s prices are reasonable.

Most diners at El Canaveral (2501 W. Greenfield Ave.) end up with doggie bags or more accurately Styrofoam boxes. After lunch, when I slid half my enchiladas with mole into the box, I fully intended to enjoy every remaining morsel again at dinner.

It wasn’t just that El Canaveral dished up large portions, it was those warm chips that magically arrived accompanied by four dipping sauces that compromised my appetite for the main event. On the heat meter, the colorful choices ran the gamut from a basic tomato-based mild sauce to the tongue tingling creamy pinkish-red sauce starring the ultra spicy habanero. We jumped the gun and made the mistake of diving into the pink sauce with those irresistible chips before the server brought our Dos Equis. A green sauce made with jalapenos ranked second-hottest on the heat scale, followed by a likewise spicy red made with chile de arbol known as “rat’s tail” or “bird’s beak” in Mexico.

Don’t like it hot? You’re safe with number four, a red sauce similar to pico de gallo, or “rooster’s beak,” the mild one commonly found on the table in most Mexican restaurants. The difference between this sauce and the classic beak; the former is pureed and the latter chopped.

A couple things we noticed before we sampled the food hinted at authentic Mexican cuisine. The spelling of “cupons” spotted on a notice on the front door, “We are not accepting cupons at this time…” suggested non-English speaking management. And inside, the Hispanic clientele, including several families with young children, implied real Mexican food.

The building on the corner of 25th and Greenfield started as a Schlitz tavern. With its wood parquet floors, beamed ceilings, and paneled walls, it could easily pass as an English pub and it did when it housed Benjamin Briggs Pub in the 1990s.

Four years ago, the current owners transformed the ivy-covered building into a restaurant worthy of the ritzy Polanco neighborhood in Mexico City. They painted the walls robins-egg blue in one room and soft peach in the other, filled every possible space with Mexican folk art and added a charming terrace.

We stepped around two children on the floor having a picnic with their Barbies as we made our way through the bar and a second dining room to the charming enclosed terrace that sheltered us from noisy street traffic on Greenfield. We caught the first warm afternoon in early June and reveled in a leisurely lunch al fresco.

When we asked our server, “What is your favorite dish?” he replied with no hesitation, “The enchiladas with mole.” That meant I no longer had to choose between Costillas de Res en Salsa, or beef ribs in green sauce, and Alambre Mexicano with chorizo, steak, bacon, cilantro, onions, jalapeno, and melted cheese. Since I sampled Alambre a few times in Mexico, I figured the meat would be topped with too many random ingredients that all tasted the same. I stayed with the safe choice, the server’s fave, and ordered the enchiladas ($8.95). My companion decided to try the Carne a la Tampiquena ($13.95), grilled steak, a dish popular all over Mexico that originated at a club in Mexico City in the 1930s. It’s always thin-cut steak, traditionally served with an enchilada, a tostada, and grilled nopales or cactus.

At Canaveral one can order the Tampiquena with chicken or steak. Either way the meat will be sliced as thin as possible. My companion’s chicken measured less than a quarter inch, a feat in itself for the chef. Her plate overflowed with delicious. The chicken was fork-tender, the bean tostada smothered with lettuce, tomato and cheese was crunchy, and the cheese enchilada, hidden underneath the steak, a surprise. A red sauce, almost like a paste covered the chicken. According to our server, “That red sauce is the marinara of Mexican cuisine.”

When we asked about the grilled nopales he replied, “We buy the cactus fresh, peel it, and grill it. Everything we serve here is fresh.”

The enchiladas with mole were equally tasty especially the dark red mole that blanketed the enchiladas. The dark color came from the chocolate added to subdue the heat from the chili peppers, yet the chocolate didn’t dominate the flavor of the mole. I caught just a hint, enough to say there was chocolate hiding in the sauce.

On another visit, the Fajitas Estilo Canaveral ($13.95) didn’t match the standards of previous dishes. The chicken, chorizo, steak, peppers, and onions did come on a sizzling platter but the dish lacked the complex flavors of the mole and the Tampiquena. The chorizo added interest but everything else tended toward bland in the house red aka marinara sauce.

But my Cecina Dinner ($10.95) was an unexpected delight, something new to add to my list of favorite Mexican dishes. I might go even further and say El Canaveral is my new favorite Mexican restaurant.

The cecina, or meat that’s been marinated, salted, and dried, had been lightly grilled and served with the usual rice and beans and a generous portion of pico de gallo. Parts of the three thinly sliced portions of meat were almost crisp like jerky but with an intense steak flavor. Hold the rice and beans and I could have easily devoured two plates of cecina.

This time I did not ask for a doggie bag. 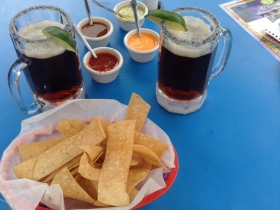 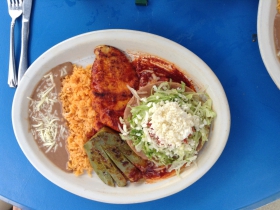 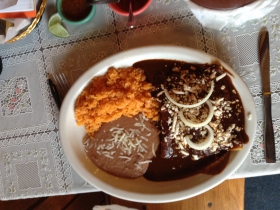 One thought on “Dining: El Canaveral, My New Mexican Favorite”