A second new building will be built in Reed Street Yards, the city's water-centric office park in Walker's Point.

While ground hasn’t even broken on the first new building in the Reed Street Yards, a second has now been approved. On Monday the City Plan Commission approved another development in the water-focused office park in Walker’s Point.

The proposed building would be developed by Klein Development Inc. and would include 52,000 square-feet of office space targeted at water-oriented businesses. The development would be located at the west end of the park at 425 W. Freshwater Way.

The building, dubbed “Reed Street Yards Office Building” in planning documents and commonly referred to as “Water Tech Two,” would include a rooftop patio. Troy Jacoby of Eppstein Uhen Architects presented the project at the meeting and is leading the project team. Planned for a parcel just east of the the Sixth Street Viaduct, the building would be just north of The Iron Horse Hotel.

The building would include a 75-vehicle parking lot. The lot’s distinctive shape would minimize its impact on the pedestrian experience by expanding in size as it moves away from the sidewalk.

According to project documents “the landscaping design incorporates low maintenance, 100% native plantings in accordance with LEED design guidelines. Vegetation will incorporate year round interest and be drought tolerant to eliminate the need for a permanent irrigation system. No invasive species are utilized in the design, and compatible vegetation will be incorporated into the bio-retention cell to provide functional yet clean aesthetics.”

Unlike most City Plan Commission actions, which are only recommendations to the Zoning, Neighborhoods & Development committee and Mayor, the commission was able to grant full approval to this project. That’s because the development is located in the Reed Street Yards Development Incentive Zone. A DIZ prescribes design standards and allows for city review, but is a less expensive and more straightforward review process than a general zoning change that many projects require.

The first new building in the 2011-approved Reed Street Yards, Water Tech One, is expected to break ground this summer. The Global Water Center, the first water-related project in the area, is located in a rehabbed structure on the edge of the office park. A number of additional developments have sprung up nearby including the under-construction Brix Apartment Lofts (98 units) and River Place Lofts (64 units). 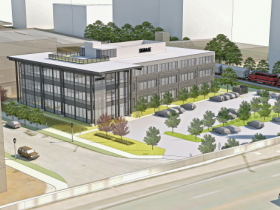 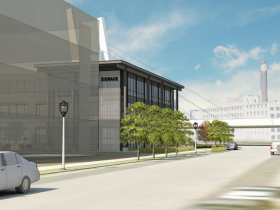 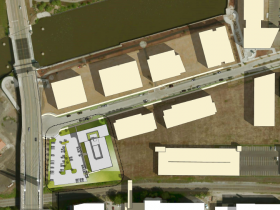