Remarkably, many of these buildings still stand today on Wisconsin Avenue. 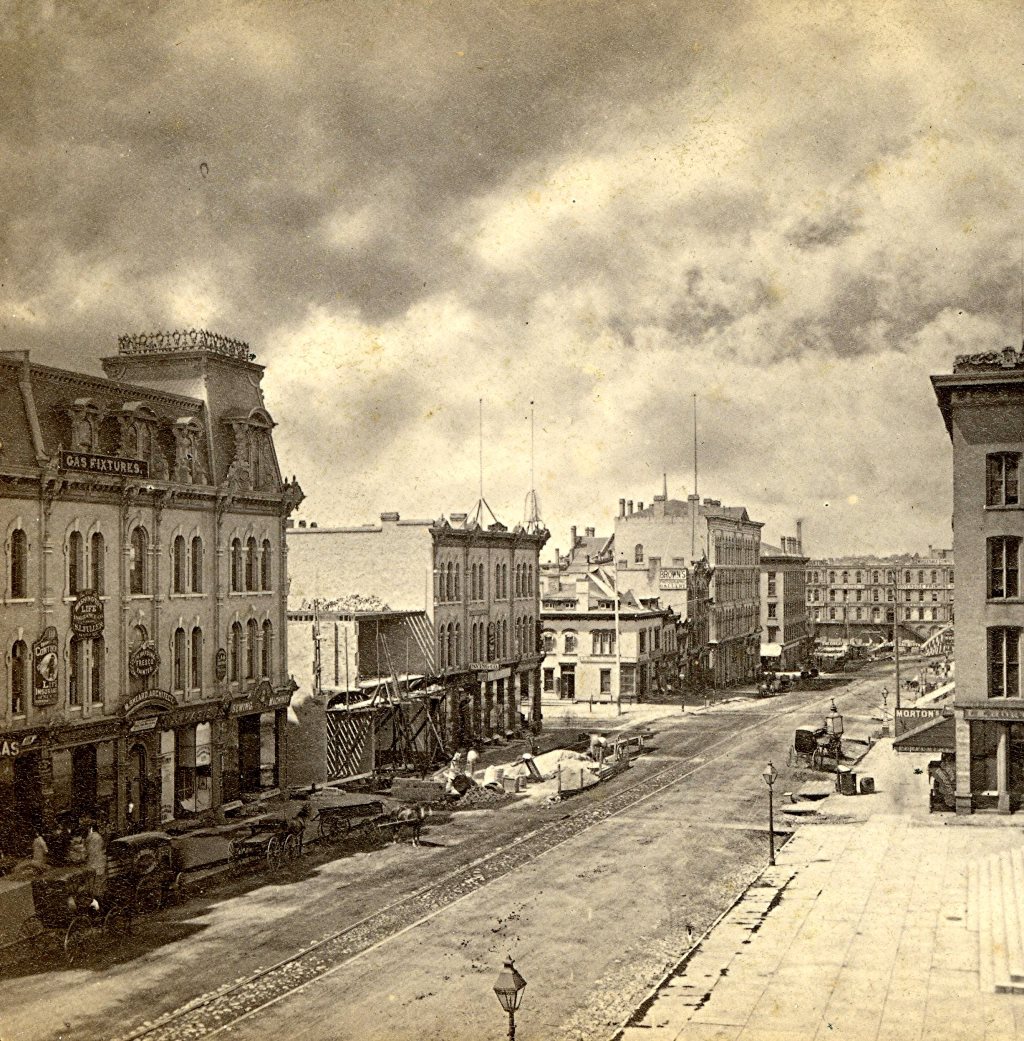 Most of the better-quality 19th century stereoviews of Milwaukee were produced by professional photographers. This view (circa 1871), with its dramatic clouds above a street with buildings under construction, is a notable exception. This is a view of Wisconsin St. (now Avenue) looking west and a bit south from the intersection of Milwaukee St.

The plaza on the lower right-hand side is at the front of the Post Office building at that time. Three of the buildings at the opposite side of the street are still standing today, although in altered form. At the far left is the Follansbee Block (also called the Birchard Block) that today houses the Johnson Bank and the new Marriott Hotel (formerly Downtown Books).

The three-story building to the right is the Noonan Block. J.A. Noonan was an early Milwaukee settler (in the 1830s) who was a contributor to the Milwaukee Advertiser newspaper. He also printed Madison’s first newspaper, the Wisconsin Enquirer, and was the public printer for the state Legislature. Noonan constructed this building in 1867, but in 1870 sold it to Guido Pfister who would soon expand the building. This building, too, remains today, although the lovely brickwork is concealed under coats of drab paint. The tallest remaining structure to the right is the Iron Block Building, also still standing today. All of the other buildings have been replaced over the years.

The photographer was William Metcalf, whose name is indicated on the stereoview with a photographer’s stamp. This stereoview was never intended for public sale. Metcalf was a noted businessman and co-owner of the Bradley & Metcalf shoe manufacturing company. In 1873 Metcalf would become a friend of H. H. Bennett, the noted photographer from Kilbourn, WI, today known as Wisconsin Dells. Metcalf would finance a new studio for Bennett in 1875.

In 1877 Metcalf travel to Japan on a photographic journey. After his return, Bennett would produce Metcalf’s stereoviews for public sale. These views are relatively common, but any Milwaukee views by Metcalf are very rare, which makes this image quite notable.