By Madeleine Behr, Wisconsin Center for Investigative Journalism - Jun 1st, 2015 12:16 pm
Get a daily rundown of the top stories on Urban Milwaukee

Too small to succeed?

In February, residents of northern Wisconsin flocked to the state Capitol for an annual grassroots lobbying campaign known as Superior Days. County officials and residents expressed disappointment with state programs and incentives.

Scottie Sandstrom, executive director of the Bayfield County Economic Development Corporation, complained that many companies in need are unable to pay the $10.88 an hour wage state law requires.

“A lot of companies don’t even start at that, and it leaves them out,” Sandstrom said. He urged the state to base its wage requirement on county-level wages. Such a change would require legislative approval.

In response, Hall offered his assurance that his agency wants to help create jobs in northern Wisconsin, a “critical part of the state.” 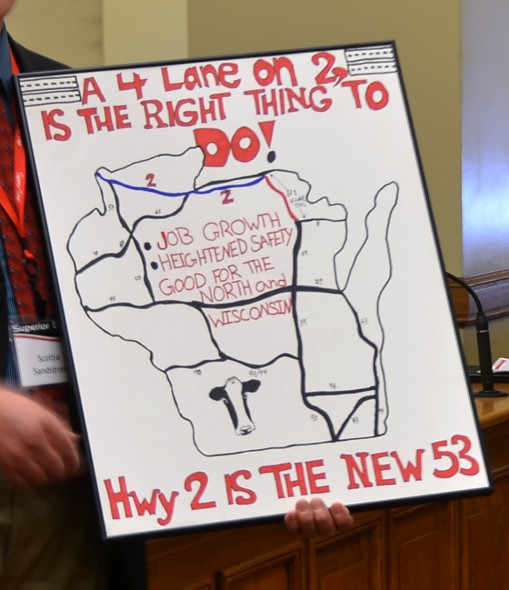 A Superior Days representative holds a sign advocating for an expansion of Highway 2 from a two-lane to a four-lane highway. Local economic development leaders say businesses interested in the region often require a four-lane highway in the area, which hurts economic growth. Photo by Madeleine Behr of the Wisconsin Center for Investigative Journalism.

“I grew up in Tomah so I understand the needs of rural areas,” he said.

Many northern county officials cited the need for highway expansions to make their communities attractive to manufacturers. Hall agreed that transportation is a hot topic with companies looking to move to Wisconsin, adding the highway system was a reason e-commerce giant Amazon opened a facility in Kenosha.

However, when Superior Days representatives met with Department of Transportation Secretary Mark Gottlieb, he shot down the residents’ hope for an expansion of U.S. Highway 2, a span of a national highway that runs from Superior to Hurley in Wisconsin.

“I don’t think it’s going to happen anytime soon,” Gottlieb said. “We have to be ruthless in deciding projects because of the fiscally constrained environment.”

“The state does not want to work with tourism or retail business,” Klein says. “They would end up hiring more people, but the state’s policy is that they won’t help these types of businesses.”

In the 2013 Wisconsin Economic Future Study sponsored by WEDC, northern Wisconsin is the only region that includes recreation as an economic driver — a sector with the greatest potential for national and global prominence. Recreational industries brought in more than $51 million to the area in 2011.

“To know what our key driver industries are provides crucial direction for various public and private entities to improve the state’s overall performance,” WEDC says about the study on its website. “It is important to note that these driver industries represent Wisconsin’s economic future.” 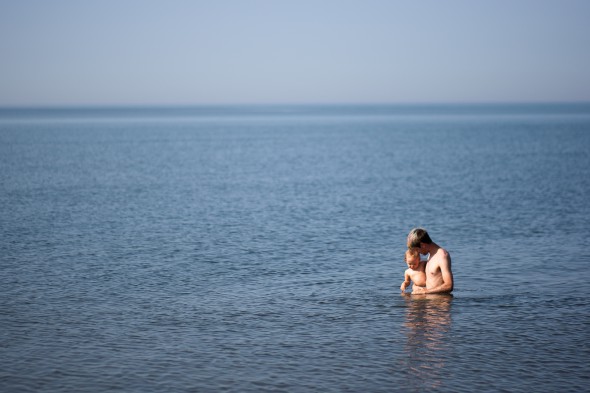 Andrew Harvey plays with his daughter in Lake Superior in July 2012. Economic development leaders in northern Wisconsin say tourism is an economic boost to the area, but the state does not offer financial assistance to tourism, retail, or hospitality businesses. Photo by Lukas Keapproth of the Wisconsin Center for Investigative Journalism.

This spending also supports 133,000 jobs in restaurants, lodging, recreation and entertainment, and retail statewide, according to the study.

Tommy Cafcas, a research analyst with national research and advocacy group Good Jobs First, says many tourism and service-oriented jobs do not have high enough wages to boost local economies. Good Jobs First recommends subsidies for industries with above average wages, which is often not the case for hospitality and tourism sectors, he says.

According to the Bureau of Labor Statistics, jobs inmining have an average annual salary of $51,920. Forestry and logging employees on average earn $38,570, in comparison with employees in entertainment and recreation sectors earning $34,500 a year on average.

In March, WEDC began a stewardship program with the U.S. Forest Service toharvest timber in the Chequamegon-Nicolet National Forest. The agency says the ability to harvest more timber could create or retain more jobs in the region by increasing employment in harvesting timber, as well as increasing the wood supply for Wisconsin companies.

Sen. Jerry Petrowski, R-Marathon, whose district extends into Rusk and Sawyer Counties, serves on the Senate Committee on Economic Development and Commerce. No legislators north of Wausau serve on the Assembly Committee on Jobs and the Economy.

“That probably hurts us a little bit because we don’t have the number of representatives and senators in the Capitol that Madison or Milwaukee would have,” Klein said.

“If we don’t have a seat at the initial table, it doesn’t mean it makes a difference,” Quinn says. “We don’t have to write ourselves off.”

Having more state dollars in the area for investments in companies or loans for new businesses “would be a blessing,” says Schuster, of Visions Northwest. “One of the huge things that are lacking in the rural areas for these startup companies is the money that doesn’t have 100,000 strings attached to it and has some flexibility to get these companies started.”

During a Superior Days meeting, participant Neil Klemme said forestry and timber jobs are critical for economic growth in the area.

“Those (jobs) aren’t Wal-Mart or fast food, they are good paying jobs that support families,” Klemme, a 4-H leader in Hurley, said, adding the jobs could bring new families, as well as retain the young people leaving for greener pastures. 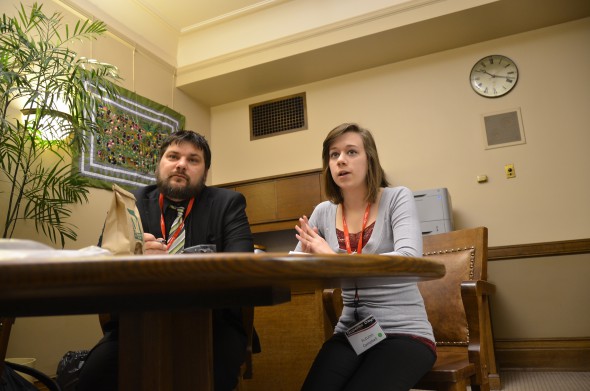 Neil Klemme, a youth development agent with the University of Wisconsin-Extension in Iron County; and Autumn Campbell, a high school student from Douglas County, discuss the quality of forestry and timber jobs in northern Wisconsin with staff of Rep. David Bowen (D-Milwaukee) and Rep. Jonathan Brostoff (D-Milwaukee). Klemme and Campbell participated in Superior Days, which brought northern Wisconsin citizens to the Capitol in February to lobby state legislators. Photo by Madeleine Behr of the Wisconsin Center for Investigative Journalism.

“When I ask a new kid at school why they moved here, it’s forest products. ‘Cause believe it or not, people do move to Hurley,” Klemme said.

County forests support 30,000 jobs in the state, with one-third of all county forest land located in Douglas, Bayfield, Ashland and Iron counties. Iron County has more than 500 forestry jobs, which account for about a tenth of its total population.

Many of the youngest participants at Superior Days say they are ready to move away from their small towns.

“I love the area, but I wouldn’t be able to support myself,” says Rachel Fedora, 18, a senior at Hurley High School.

John Klopatek, 17, recalls speaking with his mother about staying in his hometown of Mercer in Iron County to run a small business.