By Madeleine Behr, Wisconsin Center for Investigative Journalism - Jun 1st, 2015 12:16 pm
Get a daily rundown of the top stories on Urban Milwaukee 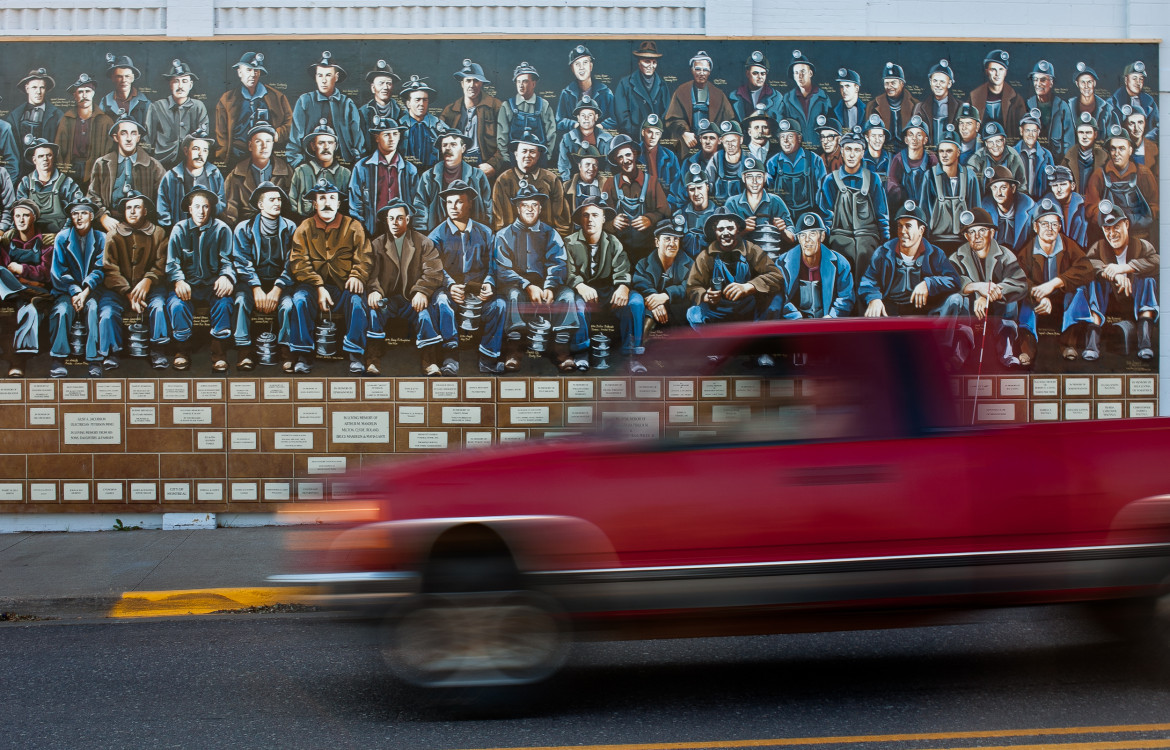 In Hurley, Wis., a truck passes a mural depicting iron ore miners in July 2012. Some residents of Iron and Ashland counties residents hoped a planned iron ore mine would bring more than 700 jobs to the area, but Gogebic Taconite pulled its plan in February 2015. Photo by Lukas Keapproth of the Wisconsin Center for Investigative Journalism.

Dale Kupczyk, executive director of the Ashland Area Development Corporation, has a system for dealing with applications from Gov. Scott Walker’s job-creation agency, the Wisconsin Economic Development Corp.: “We have to throw them in the trash.”

Kupczyk says WEDC assistance is not of much value to his community. One problem is that companies courting state incentives often require access to a four-lane highway. But Highway 2, which runs through Ashland County, has only two lanes.

He and other critics also say the agency’s tax credit programs “don’t work” because companies in his region are so small that the application process is not worth the effort.

Officials in other northern Wisconsin counties, saddled with high unemployment rates and poverty levels, have similar tales of being ineligible for economic development programs offered by WEDC, a public-private agency created in 2011 by Republican Walker.

In contrast, Dane County, home to economic powerhouse Madison, is receiving a higher amount of assistance  — more than a quarter of total incentives given by WEDC, while it has the lowest unemployment rate in the state at 3.6 percent as of March 2015, and just 9 percent of the total population.

Zamira Simkins, a University of Wisconsin-Superior economics professor, calls the northern region’s economy a “classic underdevelopment situation.” She says an economy based on natural resources, like northern Wisconsin, leads to less valuable industries with lower-paying jobs.

Collectively, these 13 counties account for about 3.9 percent of the state’s population and 2.7 percent of WEDC incentives. 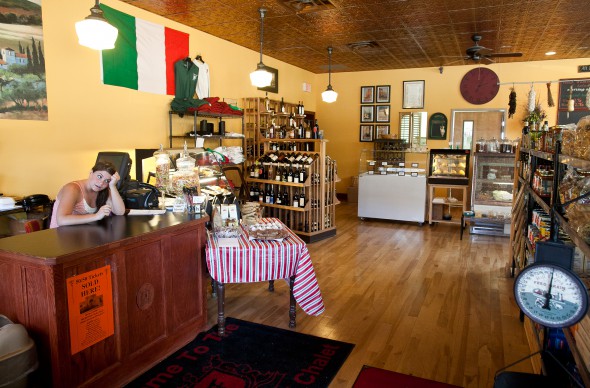 Chanel Youngs mans an empty store in Hurley, Wisconsin in July 2012. With more young people leaving northern Wisconsin because of the lack of job opportunities, local economic development leaders are trying to find solutions to keep their workforce. Photo by Lukas Keapproth of the Wisconsin Center for Investigative Journalism.

The disparity might not seem dramatic. But a Wisconsin Center for Investigative Journalism analysis shows that three-quarters of the total WEDC investment in the region from July 2011 to December 2014 has been poured into a single project, which appears to be at a standstill.

Kestrel Aircraft, which received $22 million in incentives, promised to hire 665 people by 2017, according to WEDC contracts from 2012. Three years in, the company employs 40 people in Superior and has not yet broken ground on a planned manufacturing plant. It recently merged with New Mexico aircraft company Eclipse.

The Center examined WEDC’s awards in conjunction with three metrics commonly used to gauge economic health — median household income, percentage of people unemployed and percentage of people living in poverty — and found that the agency appears to have disproportionately awarded the most money to one of the least troubled counties in the state, Dane County.

In the other five regions defined by the agency, WEDC generally gave out incentives proportionally with the share of population, the Center found.

The state’s 10 poorest counties — including Menominee County, where 31 percent of residents live under the poverty line and 11 percent are unemployed — garnered no more than an average share of WEDC awards per capita.

WEDC has drawn fire since its inception, with three legislative audits revealing mismanagement of loans and performance reports, and failing to follow state statutes and internal policies. As a result, Walker called for an end to WEDC’s loan program, including a planned $55 million revolving loan fund, and a proposed merger of WEDC with the state’s housing development agency. A Wisconsin State Journal story in May detailed a questionable $500,000 loan given to a top campaign donor whose company was failing.

Both liberals and conservatives have spoken out against the agency. Chief Executive Officer Reed Hall has defended it, saying he strongly disputes the audit’s findings.

However, officials from the northern region say the agency’s current programs and policies are simply not set up to serve the area’s economic needs.

For example, the agency’s Capital Catalyst program offers grants between $50,000 to $500,000 with a one-to-one matching grant requirement to companies dedicated to entrepreneurship.

Myron Schuster, executive director of Visions Northwest, a regional economic development partner of WEDC, says that is too high a threshold for many small businesses and local partners in northern Wisconsin.

“The community has to invest, and we can’t get $25,000 to invest,” Schuster says. “We are not a Waukesha, Racine, Kenosha. You know, it’s a whole different ballgame.” 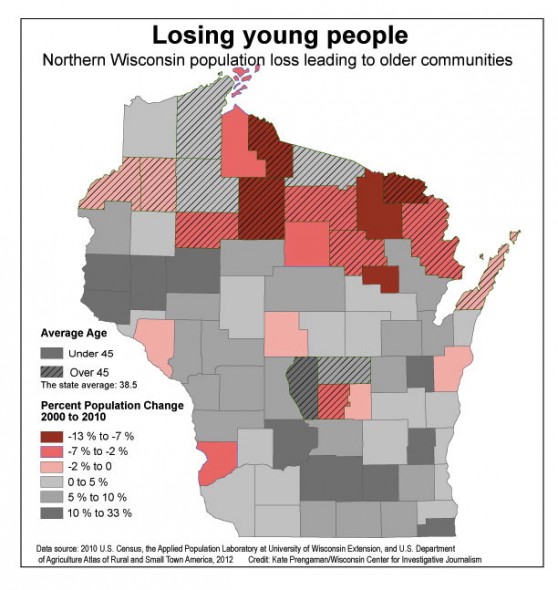 While other parts of the state are growing in population and business, northern Wisconsin is struggling. Between 2000 and 2014, Iron County has lost nearly 14 percent of its population, which local economic development leaders say hurts economic growth in the area. Map by Kate Prengaman of the Wisconsin Center for Investigative Journalism.

Schuster says WEDC is “geared for urban projects in more metropolitan areas.” The agency has requirements and conditions that his group cannot meet. “We do the best we can to make their programs work.”

Kelly Klein, coordinator of the Iron County Development Zone, says adding 10 employees would benefit his northern county, but incentives from the state “wouldn’t benefit them, and (it’s) not even worth it even to explore it.”

Northern counties have seen a sharp downturn in population: Iron County lost 14 percent of its residents between 2000 and 2014. A smaller population often leads to fewer people able to work and contribute to a local economy.

Mark Maley, spokesman for WEDC, says the agency does not advocate for one region over another in job creation or business expansion.

“All WEDC programs are open to any area, but we recognize that the needs are different in the northern and more rural areas of Wisconsin,” Maley says. He cites a range of programs such as the Wisconsin Main Street program, to assist communities of all sizes in building or maintaining strong downtowns, and the Northern Wisconsin Economic Development Summit that Walker hosts every year.

In fiscal year 2014, WEDC distributed nearly $157 million in financial assistance to companies across the state.