Before the War Memorial -- and before trees and vegetation -- the lakefront was a flat plain. 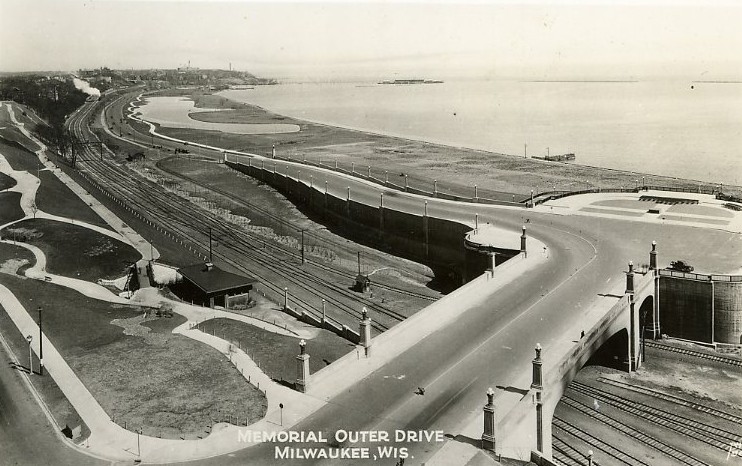 At the end of the 1880s the Chicago & Northwestern would greatly expand its Milwaukee operations adding a magnificent new depot and many more tracks. The tracks are clearly visible in this 1920s postcard as is steam from a locomotive, rising in the distance from a barely perceptible train. This shot was likely taken from the depot’s tower. The landscaping of Juneau Park, at this point, had changed little from the 1880s. But other big changes dominate the photo.

This was the era of mayor Daniel Hoan, the “sewer Socialist” who served from 1916-1940, and who would make updating infrastructure a top priority. Access to Lake Michigan also was a priority and the lakeside railroad tracks would be bypassed by a bridge overpass leading to many acres of new parks, courtesy of a major landfill project. The bridge is the Lincoln Memorial Bridge which was completed in 1926. The Juneau Park lagoon is clearly visible, minus any trees.

Much has changed since then. The depot and railroad tracks are gone and much more landfill has been added since then. The bridge has also been replaced. In 1957 the plaza at the upper right would become the entrance to the art museum and war memorial designed by Eero Saarinen. Today the railroad tracks are bike paths and a southern extension of Lincoln Memorial Drive. Quite a dramatic change from the early days of sand cliffs along a beach.