A Mayor’s Home Is Still Notable 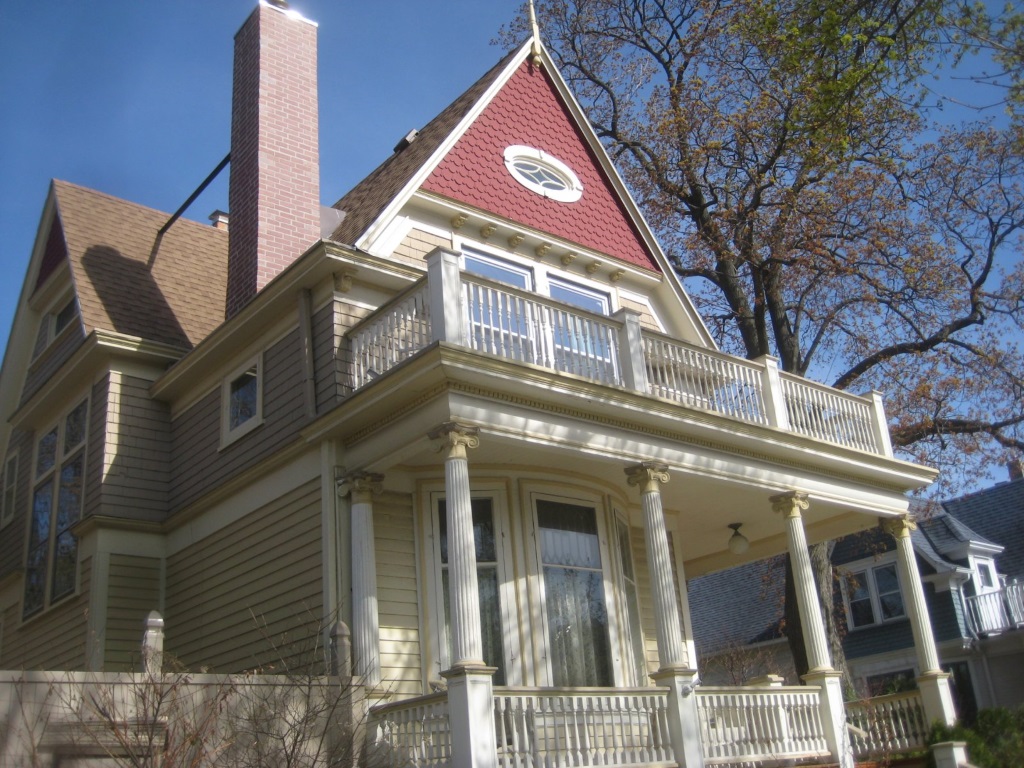 One of the delights of Milwaukee is to find the occasional lovely home in an unprepossessing location, surrounded by Plain Jane sisters, and standing out even more so due to the contrast with its neighbors.

Often when a home shows particular style it is because it came from an earlier era, such as a brick farmhouse, now surrounded by city. In other instances, the home may have been constructed by an owner in hopes that his would be the next up-and-coming neighborhood, only to find that later lots sold resulted in quite ordinary homes being built.

Sometimes, however, the home is a reflection of the owner’s trade, and this seems to be the case with this beautiful residence on S. 26th St., built in 1889.

New residents needed new housing, and for that they would turn to folks like Henry B. Ziemann, 27, a Milwaukee native and a carpenter. He took out a permit to build this home with its cedar post foundation, and hired William B. Ziemann, also a carpenter, as the builder.

What they called a “carpenter” in the late 1880’s might better be called a “developer” or a “builder” today. Ziemann built his home in the same year he married Sophie Kurtz, and his bride received a very attractive place to raise their two children. Henry had a carpenter shop in the back, which he later expanded to two stories, as it remains today, although it is now a garage. The large 60′ x 140′ lot had another home on it to the south, but that structure was gone by the turn of the century, leaving the Ziemann residence even more prominent due to its expansive garden area, as we see it today. In his time, it was probably piled with lumber, carts and other tools of the trade.

So, with Ziemann busy in his carpenter shop in the back yard, we see that he had the means, motive and opportunity to make his home just a little bit better than the others, if only to advertise his skill to potential customers and to keep his wife and family comfortable.

The residence has Queen Anne aspirations, minus the regalia that often plagued architecture of the gingerbread era. Still, the home has its moments, and packs a lot of architecture into its 1,953 square feet of finished living area. An eyelet window centered in the equilateral triangle that delineates the attic area is an elegant touch. The soffits, fascia and trim are all just a little more substantial than absolutely necessary, and the roofline on the north of the home shows an adventurous asymmetry that may have been quite radical for the era. Where the neighbors have regular windows, Ziemann outfitted his house with bays. While the neighboring homes had stoops — Ziemann’s home has porches, their columns topped with Ionic capitals supporting a dentilated architrave. A Dutch gable tops the building’s southern and eastern exposures; the latter one surmounts a secluded second-story deck off the master bedroom.

Ziemann prospered in his trade, and built a number of fine Milwaukee residences and commercial structures, including a large building for Concordia College at 3121 W. State St., which is still standing. Ziemann had over a dozen men working for him by 1909.

By 1913 this home was in the hands of Ludwig O. Pfister, a manufacturer of concrete blocks, then a relatively new construction material that would rapidly supplant brick foundations on the homes Ziemann and others would build. With two owners in the construction industry, it is likely that the home continued to be well maintained.

A. M. Lieder owned the place in 1948, and hired some painters to work on the first floor. But, on August 12th, 1948, a painter’s blow torch set fire to the building, causing damage estimated at $120, which sounds trifling.

In 1951, tired of shoveling coal into the furnace, Werner Lieder spent $240 to install an oil burner in the basement. He also paid $150 to have two 275-gallon fuel tanks installed, which should have gotten him through any serious winter.

In 1968, tired of washing dishes and hauling out the trash, George Lieder installed a dishwasher and a disposal in the kitchen of the old home.

A Mayor Moves In

In late 1989, John O. Norquist, then in his first term as mayor of Milwaukee, and his wife Susan Mudd, an environmental activist and lawyer, bought the house and moved here from a modest duplex nearby. Mudd was the head of Citizens for a Better Environment, and practiced what she preached. A newspaper reporter noted that the family even made sure the garlic peels made their way into the compost pile, and not into the disposal.

The First Family immediately began making repairs and improvements to the residence, which by all accounts had been well maintained, but was still a century old. The inspector had found 11 building violations in the old house and ordered them remedied.

Within the first three months of their occupancy, the new owners installed three floodlights outdoors, and 20 outlets indoors, along with a new dishwasher [$4,300]; replaced porch handrails front and rear, tuckpointed the chimney, relaced rotted wood, replaced the porch roofs, and replaced the porch steps [$8,800]; worked on interior finishes, patched plaster and drywall, hung doors, weather-stripped the windows, installed a counter top, and put in a support post to keep the whole works from collapsing [$5,000].

In January, 1991 another $13,000 was spent on interior partitions, and other work on the outside of the residence. While all of this was going on, the inspector issued an order in January that the mayor must repaint the exterior of the building.

Inspectors make orders like this all the time, but since it was addressed to the mayor, it made a good story for the papers. The mayor’s spokesperson assured the public that the home would be painted in the warm weather, after the outdoor work was completed.

The residence, now up-to-code and painted, remained the home of Norquist, Mudd and their two young children until he left office on the last day of 2003 with a few months remaining in his term. Norquist moved to Chicago to serve as the president of the Congress for a New Urbanism, from which position he retired in 2014. Mudd remains involved as an attorney for the Environmental Law and Policy Center.

After the departure of the Norquist / Mudd family, the home remained on the market for over a year until it was purchased by the current owners for $175,000 in April 2005. The home continues to be attractively maintained, although the old carpenter shop / garage is looking a little crusty. Currant bushes and lillies grow between the alley and garage in an admirable use of what is often a waste space. The boxwood hedges and the Pfitzer junipers could use a little trim before the tour, while the pachysandra was in fine form on a recent visit, as ruby red tulips bloomed in the front yard. The setting is most attractive and demonstrates that a modest home in a modest neighborhood can nonetheless exude style and dignity.

But He Doesn’t Live Here

One elected official, no longer in office, remembers that Norquist and Mudd were often accused of not living in the city, and were often said to reside in River Hills or Mequon. This was one of those preposterous urban legends, and the elected official wondered about the source of the rumor.

During campaign season one year, a worker came up to him and repeated the allegation.

“How do you know the mayor doesn’t live there?” the official asked the canvasser.

“Because there’s never any garbage in the can behind his house,” he was told.

“That’s because his wife probably doesn’t make any,” the official responed

Your Chance to Tour

The Ziemann – Norquist home will be a featured stop on the 34th Annual Spaces & Traces Tour of Historic Milwaukee, Inc., Saturday, May 16th from 9 to 5 p.m. Tickets are $20 for members and $25 for non-members and are available the day of the tour at 1236 S. Layton Blvd. and 1515 S. Layton Blvd. The tour includes an optional 1:30 p.m. lecture by historian John Gurda. 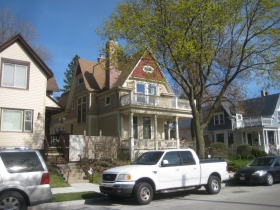 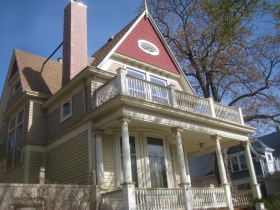 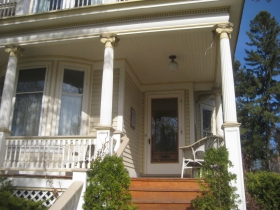 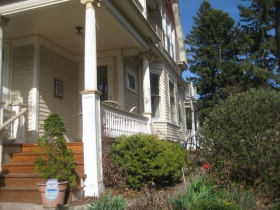 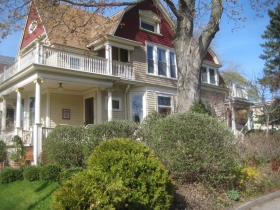 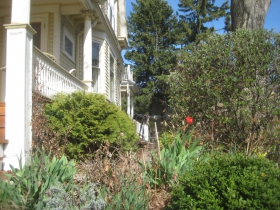 How Milwaukee Is It? The residence is 3.4 miles from Milwaukee’s City Hall and just blocks from Mitchell Park.

3 thoughts on “House Confidential: A Mayor’s Home Is Still Notable”