Last week milwaukeeworld.com mentioned that David Riemer was planning a series of public addresses at UWM, where he is a distinguished lecturer or something. We interpreted this return to visibility as a sign that Riemer might consider another run for County Executive.

We were right, as the following letter attests:

I can’t imagine a scenario where Walker would be elected governor, but I’m ready to run in case he is recalled or has to resign in disgrace.

This terse note from Riemer almost sounds like a Bill Christofferson soundbite, which means it’s a good one.

Notice the “resign in disgrace.” This seems like a mightily provocative thing to say about the County Executive, but it does remind us that there is a real wildcard out there that might possibly impact the county.

That would be the ongoing investigation by Federal and County officials of the activities of Bear Stearns & Company, its former Chicago managing director, P. Nicholas Hurtgen, and a $100 million bond issue for the County of Milwaukee that resulted in significant fees for the firm in 2002. The investigation was announced last July, and was mentioned in www.milwaukeeworld.com.

By January, 2003, Hurtgen held a fundraiser for Scott Walker in Chicago, just weeks after the bond issue had been awarded. This fundraiser was noted by former Supervisor Jim McGuigan on his website fully a year before the Milwaukee Journal Sentinel got on the story, which it has since dropped.

Hurtgen was once an associate to Jim Klauser along with the man for whom Klauser was the right hand, former Governor Tommy Thompson. Thompson served as an usher at Hurtgen’s wedding.

Bear Stearns, during the Thompson administration, was awarded the $147 million bond issue for Miller Park, earning the firm $2 million in commissions.

Hurtgen is no longer employed at Bear Stearns after questions regarding an Illinois Hospital bond issue were raised by the Chicago Sun Times.

Hurtgen was also a “Ranger” in the campaign to re-elect the president. Walker was the Wisconsin chairman of the George W. Bush campaign.

Most importantly, with all of these tantalizing connections, the feds and the D.A. are continuing their investigation of the bond award in Milwaukee County, although a panel headed by Janine Geske, a former Supreme Court Justice and acting County Executive, found that the procedures in place for the award were in order.

The question remains: will there be any political liabilities for Walker once the results of the investigation are known?

It will depend on the results of the investigation, and we must realize that the feds, and the D.A. do work at their own paces, and that these are incredibly complex investigations.

Still, there is some interest in the courthouse about the investigation, and it could be giving Walker’s advisers some jitters as he campaigns across the state.

County Clerk Mark Ryan, a Democrat, when asked about Riemer’s “resign in disgrace” comment quoted above, said “the Bear Stearns investigation is still ongoing and it would be interesting to see what might come of it.”

Milwaukeeworld.com is always looking at new sources of revenue for the City of Milwaukee, and it occurred that there might be a goldmine over at the Potawatomi Bingo Casino, now that the monstrous facility on Canal Street employs who knows how many card dealers.

Well, it would make sense, but it is not going to happen, according to City Attorney Grant Langley.

“The City has no authority to regulate the gaming operations of the casino,” he said. “This is the responsibility of the state.”

Well, then, could the state require that casino dealers get a license from the City?

Probably not, Langley said, due in part to the state’s existing compact with the tribe, and due to the tribe’s status as a sovereign nation.

On Wednesday, February 2, I plucked this reservation card from its holder at the North Grand Ballroom of the Milwaukee Athletic Club. It showed that the room was reserved by Broydrick & Associates, a politically-connected lobbying firm. The card reserved the room at 7:30 a.m. for a fundraiser for the Assembly Democratic Campaign Committee. (“Special Guest DOA Secretary Marc Marotta“). 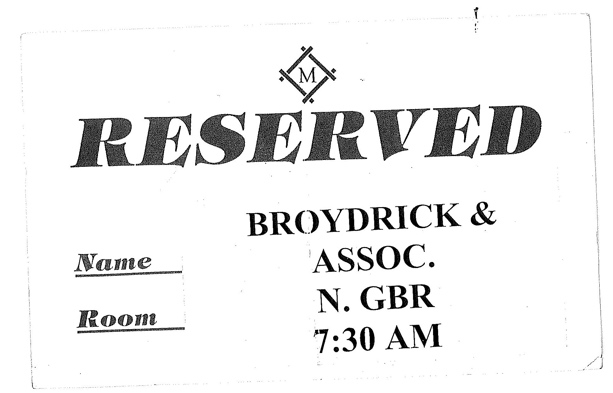 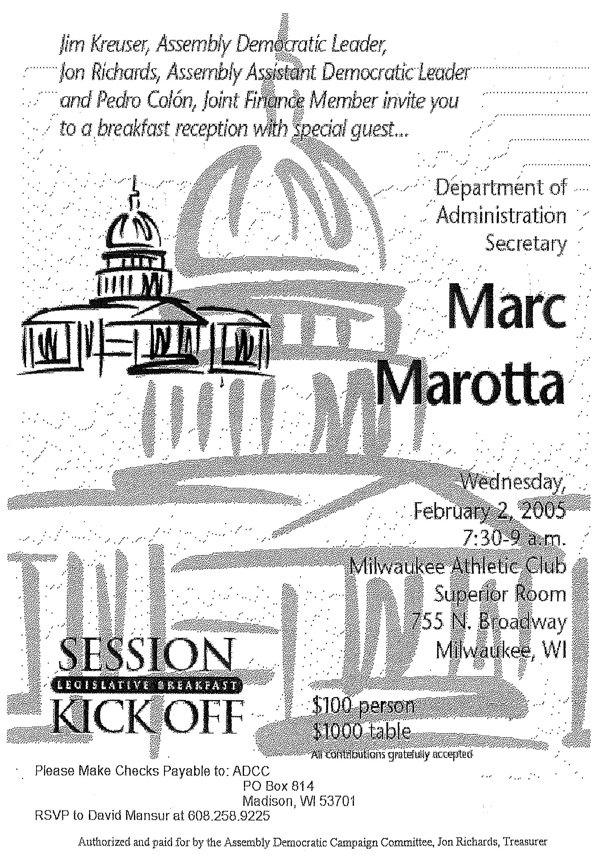 Lobbyists may not contribute to the campaigns of individual candidates, but they are not prohibited from contributing to joint campaign committees of the Assembly Democrats (or Republicans) or the Senate Republicans (or Democrats.)

Therefore, it was perfectly legal for Broydrick to offer his membership privileges to the Assembly Democrats, but not to any individual candidates.

The loophole is that the Assembly Democrats, or their analogous counterparts across the aisle and in the other house, are free to take the proceeds from such a fundraiser and to divvy them up as they see fit, including into individual campaigns, which is what usually happens.

According to a representative of the Ethics Board, “we have attempted to change the law to prohibit this kind of activity, but the measures have never passed in the Legislature.”

Louis Fortis, the grandly- and self-titled “Publisher & Editor-In-Chief” of the Shepherd Express newspaper must deal with not one, not two, but three Equal Employment Opportunity Commission complaints against his hiring practices at the paper. EEOC investigations are confidential, but this information was relayed to milwaukeeworld by one of the complainants who was fired from the Shepherd Express’s parent company, Alternative Publications, Inc. after years of service. The woman, whose identity is being withheld to maintain the anonymity of the proceedings, confirmed that her case, along with those of two other women formerly employed by the alternative newsweekly, is proceeding.

Bobot Back on Job

Vince Bobot, the former cop, city attorney, municipal judge and mayoral candidate, is back in the City Attorney’s office. He had been doing some criminal defense work, “and now I know both sides of the fence,” he says.

His new position “will deal with neighborhood issues,” he says, including things like shutting down drug houses. The work will interface with both Municipal and Circuit Court systems.

The Wisconsin Coastal Management Council will meet on Thursday, February 17, at 1:00 p.m. at the Urban Ecology Center, 1500 East Park Place, in Milwaukee.

The Council will make recommendations to the Wisconsin Department of Administration on the award of federally funded Wisconsin Coastal Management Grants to state and local governments, Indian tribes and non profit organizations. The funds are for projects to protect the Great Lakes and their coasts and provide improved public understanding and access. Available federal funds to be awarded total $1.5 million.

The Council will also hear reports on coastal issues within the Southeastern Wisconsin Regional Planning Commission area, and progress on redeveloping the Menomonee Valley.

The Wisconsin Coastal Management Program (WCMP) is dedicated to preserving and improving access to the natural and historic resources of Wisconsin’s Great Lakes Coasts. The program works cooperatively with state, local and tribal government agencies, along with non-profit groups, to manage the ecological, economic and aesthetic assets of the Great Lakes and their coastal areas. For more information, visit the WCMP web site at http://coastal.wisconsin.gov.

[This information is provided as a public service by milwaukeeworld.com]

The south side home formerly occupied by Mayor John Norquist and his wife Susan Mudd is still on the market a year after the family disembarked to Chicago … Johnny Vassallo plans to open another restaurant, this time in the former Zyng, which had a brief fling in the Jefferson Street location formerly occupied by DeLind Gallery of Fine Art. … Sen. Mary Lazich held a fundraiser last Wednesday at DeLind’s new location, 400 E. Mason Street. Dale Schultz and Glen Grothman, her colleagues, showed up to lend their support. Lazich, who is petite, keeps her trim by walking many miles a day, she said. To prove the point, and to mark the miles, she wears a pedometer – just like Tommy Thompson. “I am doing it in a competition with other members of the Council of State Legislators,” she says, adding that she thinks she is the only member of the Wisconsin delegation to do so. Judging from the avoirdupois of certain other legislators, there is little reason to doubt her word. Other dignitaries at the event included Mike Grebe and Atty. Michael Hupy. … What about that advertisement where the fellow says, “My son was in a car wreck and Michael Hupy got me 22 million dollars!” – Doesn’t the son deserve a little something? … Judge Joan Kessler and her husband, newly-returned Rep. Fred Kessler dined at Zaffiro’s last Saturday. The Kesslers recently sold their east side home to Julia Taylor, head of the Greater Milwaukee Committee. The Kesslers had to move to their new district. … Comptroller W. Martin “Wally” Morics, C.P.A., was waiting in front of Glorioso’s Saturday afternoon while his wife went upstairs to the gold shop to get a piece of jewelry repaired. He said that this week should be a hot one as the Common Council begins to consider new legislation that would prevent the recent TIF 48 debacle, recounted here previously.

Accounting is never easy, but the legislation, sponsored by Ald. Michael Murphy, would put better TIF controls in place so that the Comptroller must be notified of plans by city employees to encumber city funds – the sort of controls that one would imagine were already in place. Morics says there is opposition to the plan in the Department of Public Works, where it is feared that the Comptroller could interfere with the department’s need for flexibility as it manages and develops Tax Incremental Funding District expenditures. … Simon Warren says his “A Night in Bronzeville” was well received at the University of Wisconsin – Milwaukee Union Ballroom on February 9th . The premise of the play is that the Bronzeville neighborhood is readying itself for an expected visit by Duke Ellington. He did much research for the project, he said. Ellington, it should be remembered, made many visits to Milwaukee over a 35-year period for performances, and what I would have given to have seen just one of them. Ellington would stay at a house, still standing, on N. Palmer Street. … The Dogg House will open at 1433 East Brady Street soon, bringing life to what was once a Christian Science Reading Room, thank God. …