A number of documents have fallen into milwaukeeworld’s hands recently, and perhaps it might be instructive to read through some of the leadership and strategic plans as we contemplate whether the board of the museum was fulfilling its fiduciary responsibilities, or was simply enjoying being rich and well-connected.

The Milwaukee Public Musuem’s Strategic Plan of June, 2002 gives us a clue of where the organization planned to be by “the end of 2007, when MPM celebrates its 125th anniversary.”

Under the rosy scenario, (now much clouded,) by that time:

“Many permanent exhibits will be upgraded

“Curatorial departments will be restructured

“State and Federal funding will augment the county’s annual allocation

“Annual private support will have grown dramatically and the endowment enhanced

“MPM will be traveling its first major temporary exhibit

“A building expansion and renovation project will be under construction

“A visiting scholars program will complement existing curatorial staffing, and

“Our collection will be digitized and accessible online.”

Well, I want somebody to build me a rocket ship so I can spin records on the moon, which is just as likely to happen in 2007 as the museum’s board reaching any of its goals.

Also, according to the Strategic Plan, “Since its founding in 1882, MPM has excelled in innovative exhibits and educational programs, grounded in the MPM’s scholarly research, to inform the diverse audiences served by the institution. … there is consensus about MPM’s strengths: devoted employees; loyal and valued volunteers; high market penetration; a large and growing membership; diversified earned and contributed revenue streams; a program mix addressing topical issues; public and private support; productive collaborations with other institutions; and a positive public perception.”

At a meeting January 28, 1992, the Milwaukee Public Museum Board of Directors approved a general description of the board and its responsibilities.

The 27 members had various responsibilities, collectively and individually according to the document.

“The Board is responsible, primarily for

(a) raising and responsibly managing organizational funds.
(b) making sure the Museum achieves its stated purposes and objectives
(c) making policy decisions for the Milwaukee Public Museum
(d) oversight of Museum management.”

The reader is free to determine how well the Board members took care of those responsibilities.

The Board was also responsible for “reviewing and approving long range plans, developing leadership throughout the board, coordinating an annual review of the executive director, hiring and firing the executive director and governing with excellence in an accountable, competent and effective manner.”

There are also individual Board member responsibilities, to wit:

(a) “supporting the Museum financially, within their individual ability to do so
(b) “actively advocating the museum and cultivating support of others
(c) “working to raise funds for the Museum among their own constituency”
etc.

Among General Responsibilities, we learn that “A critical responsibility of the board derives from its relationship to the President, the museum’s chief executive officer. The selection of that executive and the continuing surveillance of his activities are primary board responsibilities which cannot be delegated and must be diligently and thoughtfully fulfilled.”

The Milwaukee Public Museum has attracted the attention of a website concerned with non-profit governance. It is the new poster child for bad behavior, and our Attorney General and District Attorney take some lumps for their failure to act.

This blogger takes the Milwaukee Public Museum board to task for failure to properly govern the institution, and accuses Attorney General Peg Lautenschlager of ignoring her responsibilities.

In short, the writer feels that governance of charities in Wisconsin is slipshod and haphazard. Compelling reading, and maybe time for a legislative fix?

Three Holy Women Catholic Parish was formed with the mergers of Holy Rosary, St. Hedwig’s and St. Rita’s churches. But for thousands of us, the parish’s annual festival, held last weekend will always be Ritafest.

The event, held in the Cass Street Playground at E. Pleasant St. and N. Cass St., is one of the largest and best-organized festivals in the city and has a number of attractions, including delicious Italian food, rides for the kiddies, and the ever-popular Paddle Game in which numbered house painter’s paddles are rented for $1 a chance. After all paddles have been sponsored, a wheel is spun, and the lucky winner can walk away with beer, wine, cheese or liquor. Of course, the luckiest guy at the games on Sunday was Victor deToro, a fellow with a Rolls-Royce, for crying out loud, who won two games in a row.

This includes massive hand-carried vayas that consist of four very long poles attached to a large box upon which is mounted either a large painting of the Virgin Mary, or her statue. The long poles are padded on the underside, and are about shoulder height (for an average Sicilian, that is.) Upon orders from the loudest member of the contingen, a score of men, dressed in blue shirts and wearing red bandanast, hoist the structure upon their shoulders and bear the burden of carrying the Virgin on her rounds, to accompanying chants, prayers, andoaths that might be curses, all barked out in most strident tones, in Sicilian. It makes for quite a spectacle.

A reminder, though, that this is a procession and not a parade, comes at the head of the event, which is led by a seminarian wafting a censer through the crowd, although it appeared the frankincense inside did not take. His contingent included another seminarian with a huge crucifix followed by five altarchildren, one of them a girl. 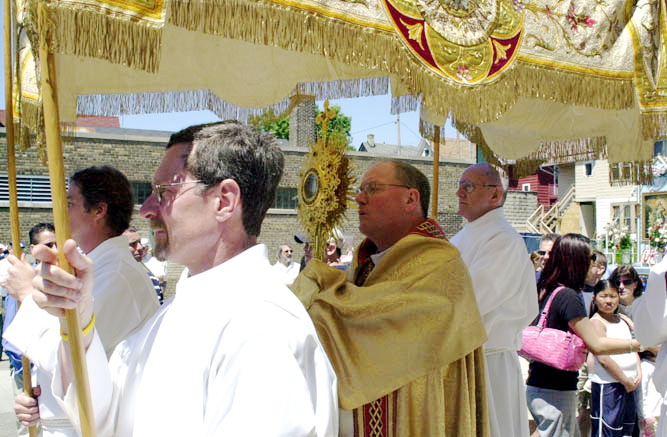 There follows a most unusual sight, at least for a city street. Four priests, each bearing a vertical support pole, walk down the street. The poles are attached at the top with a fabric roof to create what is essentially a walking tent or canopy. Beneath the tent, and walking in time, is the Archbishop. He is carrying a gold monstrance, a very radiant piece of sculpture that entirely obscures his face. As the procession passes, you can see that Archbishop Dolan is engaged in contemplative prayer as he makes his way through the streets of the lower east side, while the Alonzo Cudworth American Legion Band plays “Onward Christian Soldiers,” an 1871 Protestant hymn by Arthur Sullivan that must have been 100 years old or more before Catholics started playing it. Ecumenism!

The archbishop is followed by three priests, a firefighter with the American flag, a couple of guys in suits who would be politicians in any other similar parade in any other ethnic neighborhood, but who aren’t, and the members, male and female, of local religious societies like the Men’s Pompeii Church Society and the Congregazione Maria SS. Del Lume, which honors the patron saint of Porticello, Sicily, that most productive birthplace of future Milwaukeeans.

Even Pompeii Church, ground into dust these many decades, rises once again in the parade, as a scale model of the “Little Pink Church,” lost to freeway construction, takes its place of honor in the solemn spectacle.

After wandering through the neighborhood, the archbishop ascends the newly-repaired stairs of St. Rita’s church, as the remainder of the procession catches up to him. He sets down the chrism at last, and it glistens in the sun, depictions of which, in its radiant gilt stylishness, it resembles. A crowd gathers, including some in a view-imparing tent set before the church as insurance against inclement weather. All carnival activity in the area ceases – not even tickets are to be sold until the benediction is done. The archbishop gulps a bottle of water in a single draught, and benedicts us. It feels good, and this time, the incense is burning, and it wafts into the crowd. Before you know it, the prayer is over, punctuated by a tremendous series of explosions – Sicilian ground fireworks – at noon! (With Sicilian fireworks, it’s all about the noise.) The acrid smell of gunsmoke displaces the frankincense; the party resumes, and the next time you see the archbishop with something radiantly gold in his hand, it is a plastic cup of beer.

Mark your calendars for July 25th and 26th beginning at 9:00 a.m. each day, where a hearing open to the public will be held before Referee Rick Esenberg on the petition of Alan D. Eisenberg to reinstate his Wisconsin law license. “Any interested person may appear at the hearing and be heard in support of, or in opposition to, the petition for reinstatement,” according to the notice of hearing, which is linked below.

The hearing will be held at Halling & Cayo, 320 East Buffalo Street, #700, right here in milwaukeeworld.

The Supreme Court of Wisconsin suspended Eisenberg’s law license one year, effective April 6, 2004 on 10 counts of misconduct, some of which involve his actions while being investigated by the Office of Lawyer Regulation, specifically, “failing to disclose all relevant information to the OLR and engaging in conduct involving dishonesty, fraud, deceit or misrepresentation in that same matter.”

Eisenberg faces the burden of proof in the reinstatement proceeding, and he must substantiate by “clear, satisfactory and convincing evidence” that he has not practiced law or engaged in certain law-related activities; that his conduct since the revocation has been exemplary and above reproach, and that he has the moral character to practice law in Wisconsin, and other things.

Relevant information may be provided to or obtained from OLR investigator Sarah Peterson, toll-free at (877) 315-6941.

From the press release:

MADISON – The State Elections Board today sent a letter to Milwaukee County Executive Scott Walker confirming that he missed his deadline yesterday to submit a response to a complaint filed against him.  A copy of the letter is attached.

The letter confirmed that the Elections Board did not receive his response until after the close of business yesterday, putting Walker in default.

“Scott Walker obviously knew that the response was due before 4:30 pm and tried to mask the fact that they were late by manipulating the timestamp on the fax machine on their end,” said Maistelman.  “This should be a very compelling fact when this comes in front of the full Board.”

The State Elections Board launched an investigation of Scott Walker’s illegal use of funds from his campaign account on May 13th.  Since then, the Board has already given Scott Walker two extensions on May 26th and June 10th to file a sworn, written response to the complaint and turn over files related to the violations.

If Walker is found in violation of Wisconsin campaign law he could face felony charges and substantial fines.

Here is the letter to the Election Board that was faxed from the Walker campaign in PDF format.