Boone & Crockett Is Rustic Yet Sophisticated

Milwaukee is getting spring fever. Patios all over the city are dusting off their chairs and adding refreshing mixers to their menus. Down the road from Tonic Tavern, whose patio I wrote about last week, is Boone & Crockett (2151 S. Kinnickinnic Ave.) a cozy spot for cocktails and craft beers just south of Beecher St., whose patio is getting a makeover. Not only will they have a stage for outdoor shows, it will also be home to the city’s first on-site food truck.

Boone’s owner John Revord teamed up with friend and chef Mitch Ciohon, currently living and “fishing all the time” in Door County, to set up shop in Boone’s backyard where he’ll serve his “Gypsy Tacos” for their patrons. His unique tortilla fillings will include fresh local ingredients, from vegetarian options to rare meats like squid, buffalo, and a signature pork shoulder. Vanguard has also agreed to provide sausages for their weekend brunch tacos.

You can get a standard Corona cerveza or bottle of High Life “champagne” from the “Macro” section of Boone’s beer menu, but don’t expect the usual taco and sausage fare from their patio. These craft eats deserve libations with some character and complexity, which Boone has in spades. Their happy hour, daily from 4-7pm, highlights their tap beers (half-off) and house cocktails ($5).

Draught beers (regularly $6-$8) come and go at Boone, one keg and its gone, except for Stiegl Radler, the Austrian grapefruit beer they mix with Campari in their refreshing “Camp Radler” house cocktail. I was unfamiliar with a couple of the breweries on tap, including Finch’s (of Chicago) Sobek & Set, a black ale, and their sour Belgian beer, Verzet Oud Bruin. Bartender Evan told me they usually have a sour on tap, as most of the staff are partial to this up-and-coming style of beer. He also informed me that they always have a nitro tap, with O’So’s Rusty Red occupying that silky smooth spot this week.

Boone & Crockett’s name would suggest it has a rustic vibe, and all the buck heads on the wall accentuate this theme. It continues the trend I’ve found at the city’s best cocktail bars, specifically those that focus on brown liquors. Sure enough, Boone has 43 bourbons, 22 ryes, 17 Scotches, and 9 other styles of whiskey. The brands that get the most action at Boone are Korbel Brandy and Old Forester Bourbon. These are featured in their premixed Old Fashioned barrels that are served “from the sky,” meaning, they run down a spout from the barrels that are propped above the bar. From there they can be mixed with soda water, Sweet or Sour, or on the rocks. The Korbel is going to be the sweeter of the two. (Fun fact: Wisconsin purchases more Korbel than any other state, probably because we’re so Old Fashioned, ho ho.)

Another trend I’ve found among the city’s top craft cocktail joints is a signature vintage shot/mixer. Boone’s uses a 170-year-old Italian amaro bitters called Fernet-Branca, which is made from 27 different herbs and other ingredients. This minty bitters can be sipped by itself or enjoyed in a Fernet & Coke, the national drink of Argentina. Another popular house cocktail is the Trinidad Sour, which blends Angostura Bitters, Old Overholt Rye, orgeat (a sweet syrup made from almonds, sugar, and rose or orange water), and fresh lemon juice. It’s fantastic. Boone also has 7 season cocktails that will be changing at some point in the next month, but are not included in the happy hour.

On top of Boone’s excellent happy hour you can grab a PBR and shot of Fernet for $5 any and every moment they are open. They also have daily specials, with Monday being Industry Night, featuring half-off drinks to service industry members and working musicians. Tuesday night the Old Fashioneds remain $5 until close. On Wednesday wine bottles are half-off and Thursday has $2 PBR plus $3 shots of Cowboy Whiskey.

Their fridge stash is one of the most diverse and exceptional that I’ve come across. They have about 50 microbrews and ciders in can and bottle. The night I dropped in they had just added Seattle Cider Company’s Dry tallboys, a nice change of pace from the sweet ciders dominating the market. While the bar’s chandeliers and gramophone horn lights are beautiful, it’s going to be great in a couple weeks when you can step outside on their renovated patio, enjoy a creative taco, cheap quality drinks and live music. Don’t miss one of Milwaukee’s best bands, Whips, when they play Boone’s backyard on May 10 with Dead Soldiers, who will be visiting from Memphis. 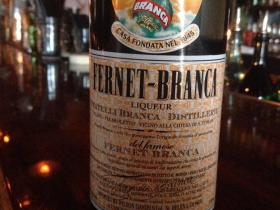 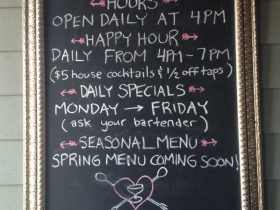 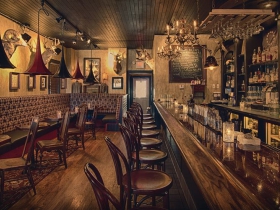 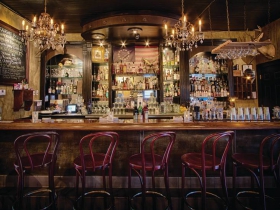 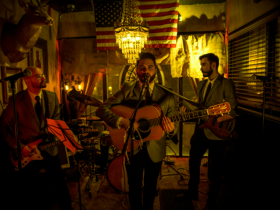 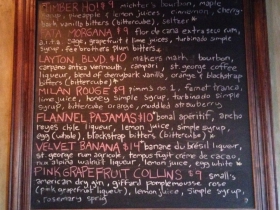