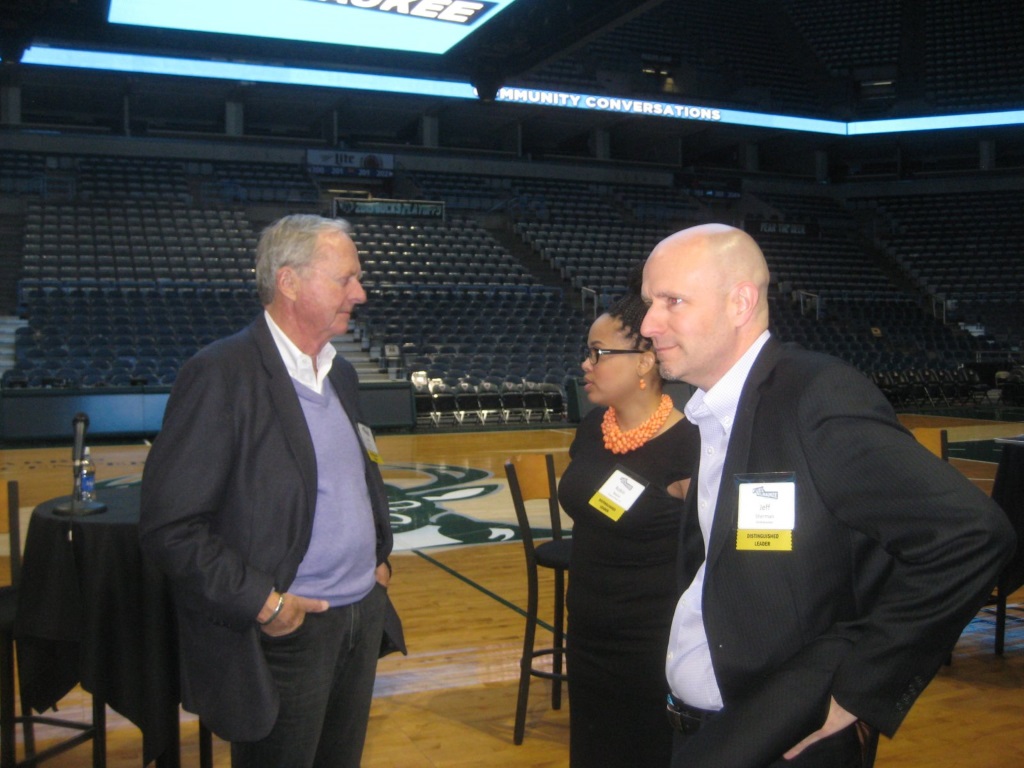 A courtside cheering section was in place Tuesday, April 28th at the BMO Harris Bradley Center rooting for the team that was performing on the floor of the “functionally obsolete” arena, built in 1988, that is home to the Milwaukee Bucks.

The five who were on the floor, however, were not professional athletes, but all were, indeed, big players. Nor was the crowd cheering an athletic contest, but still they witnessed a game with billion dollar stakes.

The spectators had been invited by Fuel Milwaukee, a group of young professionals, and the Metropolitan Milwaukee Association of Commerce, the business group that formed Fuel Milwaukee. The nearly 200 attendees were there to listen to a presentation and panel discussion cumbersomely entitled: “Exploring the Economic Development Opportunities of MKE’s New Sports & Entertainment District.”

The five worthies on the court were:

They were joined by Jeff Sherman, founding president of Fuel Milwaukee, and co-founder of OnMilwaukee.com, acting as moderator of the symposium.

Following introductory remarks from Corry Joe Biddle, Fuel president, and Peter Feigin, Bucks President, the panelists presented the party line on why a new arena is imperative for Milwaukee, why a 50 per cent public share of the funding is necessary and how a new “Sports & Entertainment District” would provide “Economic Development Opportunities” for the city — make that “region.”

The evening’s presentations did not produce new facts and figures or statistics behind the financing deal being hammered out between the team, the state, the county and the city. Who needs them? As Grunau said, experts will tell you that “85 per cent of statistics are made up,” anyway.

What Grunau lacked in specifics, he more than made up for in experience. He recounted efforts in 1999 to demolish the elevated freeway then shadowing the proposed site of the arena. At the time, the Harley-Davidson Museum was slotted to be at his Schlitz Park development, and the museum insisted that the freeway be torn down.

The freeway was a “concrete racial barrier” between Downtown and areas to the north and northwest, he said. The state was politically divided even then, he said, with a Republican Governor in Tommy Thompson, and a liberal mayor “who hated cars” in John O. Norquist. “But they got it done,” he said of the freeway removal completed in 2002.

Today, the “political situation is more difficult,” he said, but redevelopment of the site as the arena and other facilities is vital. To the north, an arena would “springboard redevelopment of Haymarket Square,” to the north. Other blocks would come into play, providing “growth and connectivity of areas northwest, north and east of downtown.” Grunau also noted that the streetcar is crucial to the arena and ancillary development. The proposed line would travel north from the arena to W. North Ave. and N. Martin Luther King Dr., he said.

“I hope this project will cause the governor, mayor, and county executive to work together.

“They’ve got to get their political differences aside, get together and get it done!” he concluded.

Cory Nettles, like others on the panel, is a Milwaukee lifer. He calls himself the “Native Son,” who ignored the advice of elders who told him to leave America’s most segregated city and “never look back.” Lots of his friends left, he said, but Nettles stayed.

Nettles also spoke from his experience as the “‘point man’ on business and economic development for the state,” and of all panelists, he was most comfortable throwing out numbers and macroeconomic precepts.

“I don’t expect to see another billion dollar project in my lifetime,” here in Milwaukee, he said, referring to the arena and anticipated ancillary development. “There are so few opportunities for a community of our size to do a project of this size,” he added, wearing a “Play it Forward” t-shirt over his dress shirt.

We have “phenomenal assets” in Milwaukee, he said, but they are “under-utilized, under-leveraged and under-capitalized.”

Leverage and capital are key, he said.

The leverage would come from what the group described as the 50 percent public share of the funding of the new arena. Usually, “the smaller the market the greater the public subsidy.” But Milwaukee’s proposed subsidy compares favorably to the national model of 75 percent public subsidy, he said.

Miller Park, for example, was a $395 million project, and it had a 75 percent public subsidy, he said. Lambeau Field’s renovations required a 60 percent subsidy.

Sure, he said we should have a “healthy, spirited discussion on public financing” (just not tonight, it seemed).

But the big issue is “not just what you gain” with a new arena in the form of additional development.

Rather, “the flip side is what you might lose,” if funding cannot be found and if the team leaves Milwaukee. After all, the NBA has a business model, and Milwaukee is on notice to comply with it by 2017, or its Splitsville. A new arena, therefore, is crucial, he said.

Robin Reese, of Vangard Group, also cited her Milwaukee background. She grew up in the Bronzeville neighborhood just north of the proposed arena location, and she remembers the thriving middle-class African American community that surrounded the area.

But, she said, “the freeway destroyed the neighborhoods. There is still nothing connecting these neighborhoods to downtown,” she lamented. The arena would attract new business Downtown and to a new business district in a revived Bronzeville.

Moderator Sherman asked if Reese had a “magic wand,” what would it be?

“Retail,” she said. “People want to live where there is shopping and entertainment.” But hers was one of the few cautionary voices heard warning that an entertainment district might cannibalize existing businesses. She was particularly concerned about the Shops at Grand Avenue, itself an urban redevelopment that has lost its luster, and most of its big-name tenants, like Marshall Fields.

The mall should be activated from the street, restoring the vitality there. (Norquist has made much the same argument.] “If we do too much retail” as part of the arena development, she said, “we will kill the mall.”

Beth Weirick of the Downtown BID invoked Norquist’s name. “What got us to this point?” she asked, where we can seriously talk about wholesale redevelopment of some 30 or more acres of downtown real estate, much of which has lain vacant for over a decade.

The answer:” Norquist’s deconstruction of the Park East Freeway. Norquist saw the resulting property as an area that could be developed. “In context, it clearly is evidence that when you have a long-term dreamer or visionary like former Mayor Norquist,” the dreamer’s plans often happen.

The investment in the arena and entertainment district will “make Milwaukee a gotta-get-to-city,” she said. It will bring us income tax, she pointed out, and attract employers and retain employees.

The arena plans are “big, bold, innovative,” she said, and we have to “get this project going.”

Weirick said members of the Bar / Arts / Nightclub economy centered in her district are “excited” about the arena development proposal, particularly the housing component. But future development must not be insular. “Other hospitality zones want us to be thoughtful,” she said. “And to connect with them.”

Greg Uhen, the architect, said the project should not be viewed “only as a sports and entertainment district.

“It should be viewed as an urban neighborhood that happens to have a sports and entertainment district.” The immediate area has great potential, he said, noting that the once-desolate Historic Third Ward, after decades of revitalization, is now recognized as “one of the 10 best urban neighborhoods in the country.”

The new project would create “authentic architecture that fits in with the city,” without mimicking the architecture of an earlier era. (One imagines he has the Wisconsin Center in mind here.)

The new neighborhood will “fill voids, and make areas walkable,” he said.

Today, “you can walk from The Brewery to Mader’s and never run across another person,” he said. 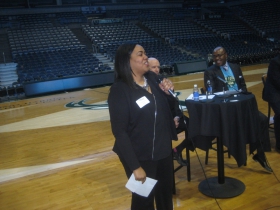 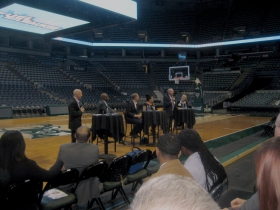 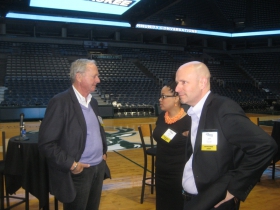 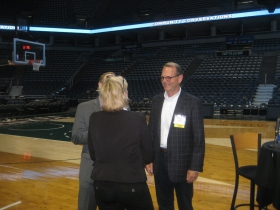 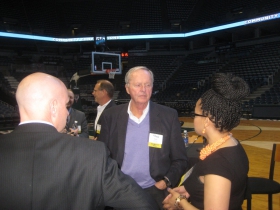 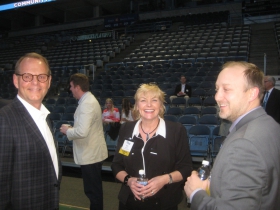 26 thoughts on “Plenty of Horne: We Want a New Arena!”