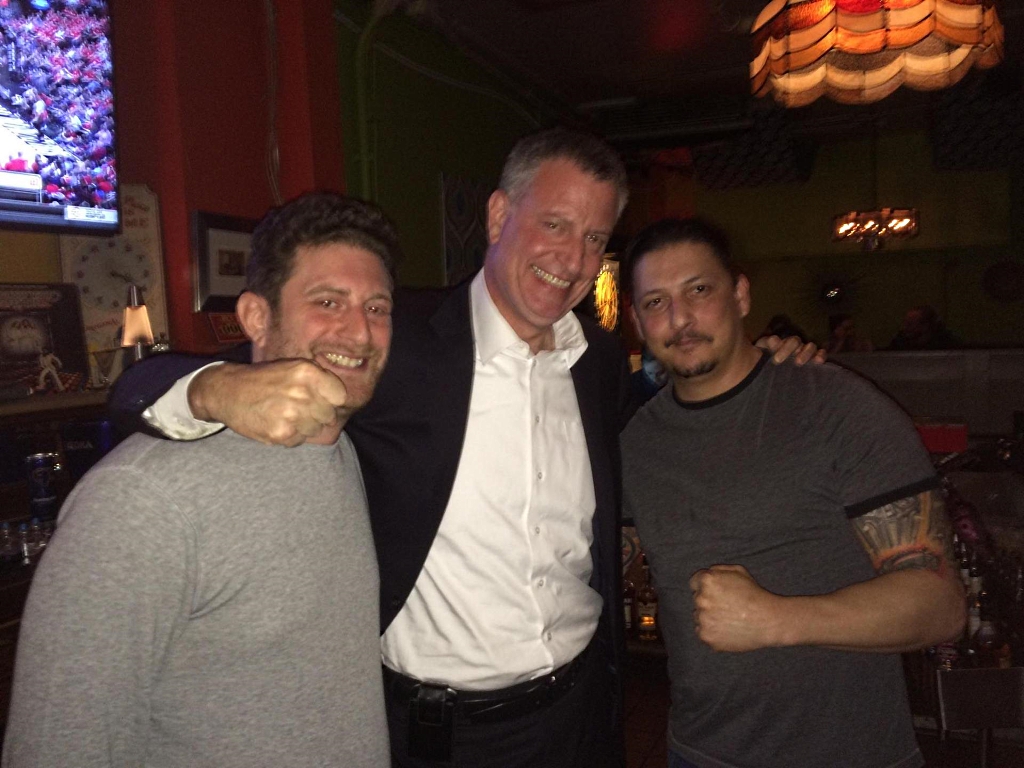 Nick DePalma got a call Saturday night, April 25th, from his old East Side childhood friend Phil Walzak, who was visiting from New York City.

Walzak’s boss is New York Mayor Bill de Blasio, and he does not travel light.

“Before I knew it, there were all sorts of official-looking SUVs out front, security guys with speakers in their ears and a crowd of people coming in the door,” DePalma recollected. DePalma owns “Nick’s House,” 1824 E. Kenilworth Place. His tavern had been featured in the Spike series “Bar Rescue,” where host John Taffer and crew performed an overnight re-haul of the bar, so Nick knows his way from forceful New Yorkers.

Earlier that evening, de Blasio spoke at the Democratic Party of Wisconsin‘s annual Founders Day Gala at the Milwaukee Athletic Club, focusing on income inequality, a hot topic for the Dems in the looming presidential election, but now it was time for a beer. In addition to Walzak and the rest of the staff, de Blasio was joined by a number of Milwaukeeans including Chris Larson, who earlier that day had won the 6th Annual Amazing Milwaukee Race with his brother Dave Larson.  After running 11 miles and busing 5 miles in an elaborate scavenger hunt, and listening to a full evening of political speeches, the state senator had enough wind remaining to hoist a couple with His Honor.

Representatives Mandela Barnes and Daniel Riemer were the Assembly’s contingent to the ad hoc proceedings. Also in attendance was Ann Jacobs, a Milwaukee attorney and delegate to the Democratic National Convention in 2012, as well as Mike Tate, the outgoing chairman of the Democratic Party of Wisconsin. Attorney Craig Mastantuono attended with his law partner  Rebecca Coffee, augmented by fellow Bar member Mark Thomsen.

Ald. Nik Kovac, another childhood confederate of Walzak and DePalma, sat out this event in his home district, as he had to get up early Sunday morning to play soccer.

So what does the Big Apple’s mayor drink while in Beer City? Beer! “He drank all local,” DePalma says approvingly. “He had a couple of Sprecher taps and a Milwaukee Brewing Company Booyah [Farmhouse Ale].

Walzak stayed close to the mayor of course, and his proximity both professionally and personally has helped propel the Milwaukee native to 11th place in City and State’s “Power 100 List 2015” of most influential political figures in the Empire State.

De Blasio obligingly posed for photographs with tavern patrons, and for one with DePalma and bartender Ryan “Rogue” Clark. Ann Jacobs posted her picture on Facebook, as did others. [Earlier in the evening, at the athletic club, de Blasio and Mayor Barrett flanked Julilly Kohler in a picture. De Blasio is very tall, that is clear from the photographic evidence. If former Mayor John Norquist had also been in the picture, you wouldn’t have been able to see Kohler at all.]

During the mayoral visit, DePalma took time to talk to members of the security detail. “They know “Tavern Rescue” from television,” he said. “They hadn’t seen my episode. But they assured me they would.”

Democrats Gear Up for Convention

The Founders Day dinner was a prelude to the upcoming Democratic Party of Wisconsin state convention, to be held at the Potawatomi Hotel and Casino June 5th – 6th. The guest speakers for that event have not yet been announced, but the general consensus of party members is that Hillary Clinton would almost certainly be among them as she pursues the presidential nomination for 2016. Right now the Democrats have their own president to select, as the final item of business at the convention will be the selection of a new chair for the party.  Mike Tate announced his plans to leave earlier this year, at which time Jason Rae, also a Milwaukeean, announced his plans to run for the spot. Rae was the youngest delegate to the national convention in 2008, and is the founder of the LGBT Chamber of Commerce.

Rae is also an employee of Nation Consulting, whose head Thad Nation was a close confidant of former Governor Jim Doyle, and some have speculated that Tate would join the firm after he is done with his political role as party chair. Tate, however, says he’s been talking to a number of people about his future, and his career plans are still up in the air.

Rae’s advocacy on gay issues is not sufficient to guarantee him universal support, however. Leonard Sobczak, the wealthy and politically influential owner and CEO of the Wisconsin Gazette, for example, is supporting the candidacy of Martha Laning of Sheboygan, and attended a rally in her support in Milwaukee two weeks ago. Laning was also in Milwaukee last Thursday for an event at the Three Lions pub hosted by former representative Sandy Pasch. She has also received the support of former representative Sheldon Wasserman, who confirms to Urban Milwaukee that he will run for the county board next year.

Laning said she decided to run for party chair last year after her unsuccessful pursuit of a Senate seat. Following her defeat, she contacted the party and asked for their detailed records on the vote. “I outpolled Mary Burke by 7 percent in the district and yet I lost,” she said. “I wanted to find out why. It wasn’t redistricting, it was lack of turnout, and I wanted to see where the missing votes were.”

To her surprise, the party refused her request for the data, despite her willingness to pay for it and analyze it herself. [She holds and M.B.A. and is a very data-driven person.] The party leaders’ motives baffled her, so she decided to run for the chair, she said. Tate, however, calls this “an inaccurate and false charge.” He notes that election data, once the state finishes compiling it, is publicly accessible, and also says his office offered to provide its analysis of the data to Laning once it was completed.

Laning said the key to the party’s success must come in winning off-year elections, and that will require better communication between party leaders, candidates, and members.

What does it take to be a delegate to a state party convention? For Wisconsin Democrats, $25 will buy you an annual membership entitling the bearer to vote in the state convention, provided membership application is made by May 15th. There are a number of delegate slots open for Milwaukee County residents of the 4th Congressional District, according to Milwaukee County party chair Marlene Ott. At this point, if you sign up and pay your dues, you will be a delegate.

This Time Their Names are on the Billboard 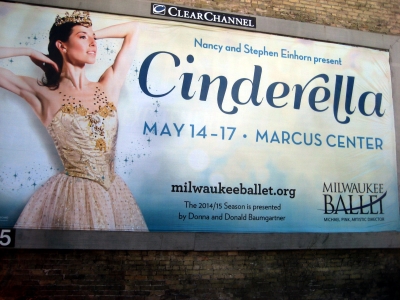 “Nancy and Stephen Einhorn Present Cinderella May 14-17,” announce billboards downtown for the Milwaukee Ballet‘s upcoming performance of the classic.

The Einhorns, of Fox Point, have a thing for billboards, it seems, but this is the first time anybody can remember them attaching their name to their message. In 2012 it was revealed that the couple’s foundation paid for central-city billboards announcing “’Voter Fraud Is a Felony!’” punishable by up to three and a half years in prison and fines of $10,000,” as Bruce Murphy wrote here.

The vote-suppression billboards “were intended to scare minority voters,” Rev. Al Sharpton announced, and were concentrated in the central city, where I have yet to encounter a Cinderella billboard. Murphy also reported that the Einhorns also financed billboards in 2010 in alliance with the conservative Bradley Foundation.

Nancy Einhorn is a member of the Ballet’s board, and her husband is a trustee of the Milwaukee Art Museum.

If the Einhorns’ newfound interest in self-publicity is intended to burnish their image, it may not be working, since it has reminded some people of their past political billboards, instead of letting them fade from memory.