Circuit Court judge rules on case involving city police he was paid to give training sessions, yet he didn't disclose this.

By Bill Lueders, Wisconsin Center for Investigative Journalism - Apr 15th, 2015 10:35 am
Get a daily rundown of the top stories on Urban Milwaukee 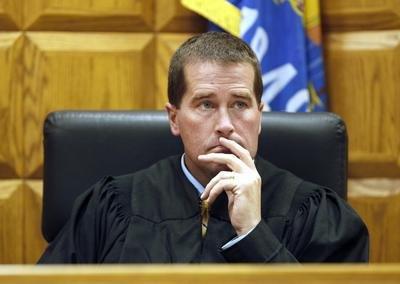 Each year more than 2,000 state public officials, from the governor to members of the Chiropractic Examining Board, must file annual Statements of Economic Interests. (Forms for 2014 are due April 30.) These list employers, other sources of income, creditors and more. This disclosure allows the media and public to check for possible conflicts of interest.

In 2009 McGinnis presided over a jury trial in which Adamski, 44, was convicted of multiple charges including the repeated sexual assault of a child and incest. McGinnis sentenced him to 45 years in prison, followed by 25 years of extended supervision.

Adamski reasserts his not-guilty plea but says his main issue is accountability. McGinnis’ Statements of Economic Interests do not appear to list police training session income from the city of Appleton, for years in which other records show he was receiving substantial sums. Appleton police were involved in the case against Adamski.

McGinnis, in a telephone interview and email exchange, said he believed his income from the city of Appleton was disclosed on the forms, but did not explain where this information appears. “I believe I reported it accurately and I’ll take it up with the appropriate authority at the appropriate time,” he said. “You can draw whatever conclusions you want based on the limited information and knowledge you have.”

Violations of the state law regarding Statements of Economic Interests can bring civil and criminal penalties. In 2001, the state Ethics Board imposed a $3,000 forfeiture on former Republican Gov. Tommy Thompson for failing to report a stock holding. In 2003, it sought criminal charges against Democratic state Sen. Gary George for omitting some income sources. No such charges were filed, but George was later convicted of federal crimes.

In other cases, said Jonathan Becker, ethics division administrator of the state Government Accountability Board (which replaced the Ethics Board), the agency has been satisfied with the filing of corrected forms.

From 2007 through 2011, records show, Appleton paid McGinnis $18,450 for 41 half-day “Legal Update” sessions. The city’s finance director, Tony Saucerman, said the payments were made directly to McGinnis.

“The fact that a judge instructed officers and then ruled on those officers’ performance is an obvious conflict of interest” that his attorneys did not know about, Adamski said. An explanatory comment in the state Code of Judicial Ethics says parties should be told of any potential grounds for recusal, “even if the judge believes there is no real basis for recusal.”

McGinnis’ Statements of Economic Interests (posted below) do list outside income for training sessions at Fox Valley Technical College and the federal Amber Alert program run through FVTC. The college says these payments totaled more than $150,000 for the six-year period between 2009 and 2014.

In 2008, controversy arose over a $2.7 million, 15-year lease McGinnis signed with the state Department of Corrections for a building he owned. A DOC lawyer called this “problematic,” since DOC employees might appear in McGinnis’ court, but the state Judicial Commission okayed the deal.

Adamski sued McGinnis and others in federal court, alleging conspiracy. On March 30, a federal judge dismissed the case as frivolous, saying McGinnis’ alleged failure to report money from Appleton for teaching legal updates “caused no harm” to Adamski.

Adamski is also seeking post-conviction relief in state court, before Judge McGinnis. The case has stalled because Adamski says he can’t afford a $147 bill for records he is seeking from McGinnis under the open records law. This includes $125 for two hours of McGinnis’ time, spent locating the records.

McGinnis declined comment on this case, saying it would be unethical for him to do so.

One thought on “Did Judge Violate Disclosure Law?”