Google shows the new NBA arena as the Harley Davidson Arena. But a Harley spokesperson says the description is "erroneous." 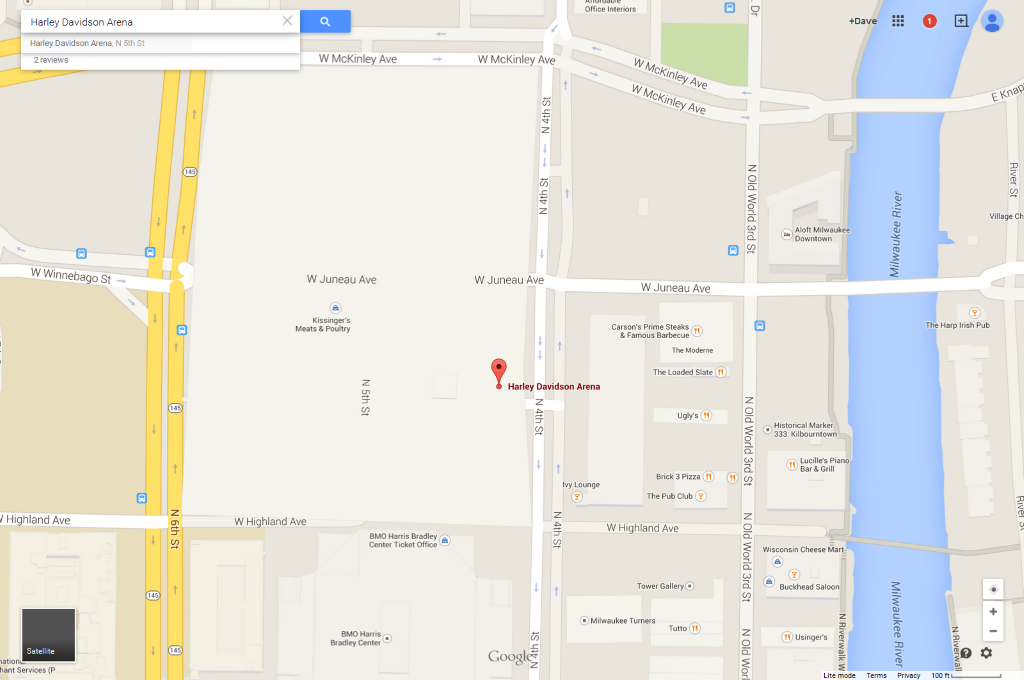 This one just couldn’t wait for our weekly real estate update. Late yesterday the Milwaukee Bucks notified the media of 10:30 am press conference to be held today announcing a “New Milwaukee Sports and Entertainment District.” Then early this morning Don Walker, of the Journal Sentinel, spilled the beans. Walker wrote, “the development would include a 700,000-square-foot, 17,000-seat arena; a 60,000-square-foot public plaza, anticipated as a sort of live entertainment space on what is largely a city-owned parking ramp at the corner of N. 4th St. and W. Highland Ave.; and arena parking across the street in the Park East area.”

Additionally, the story says the Bucks intend to build a new practice facility in the Park East, next to The Brewery, and envision the BMO Harris Bradley Center being razed, which they would then redevelop into a hotel and office or commercial space. The combined project is expected to cost  $1 Billion.

But what’s this about Harley-Davidson?

On March 30th, 2015 Rich Kirchen, of the Business Journal, covered what at the time didn’t seems like arena news with his story, “Top Brewers exec vows to win back Harley as Miller Park sponsor.”  Harley spokeswoman Maripat Blankenheim explained the company’s non-renewal because they “just made the decision to look at other options.”

Could the new Bucks development be that project? We ask, because there’s a little oddity occurring on Google today. If you zoom in on the location of the new arena site here’s what it says: “Harley Davidson Arena.” Also, this morning a search for “Harley Davidson Arena” brought back a result, which has since been removed.

Might Harley become the naming rights sponsor for the arena?

Blankenheim told Urban Milwaukee in an email, “Total speculation, apparently by Google. All reports are erroneous. But thanks for checking.”

So what’s going on? Is Harley being secretive? Or is Google having a little fun with Milwaukee? (Heck they did just rollout the ability to play Pac Man (that was fun) in Google Maps.) We’ll keep you updated.

Past reports had suggested the new arena and related development would take up about ten acres, but the new development, as outlined in the JS story, would use about 30 acres. That’s a huge change.

Recently Mayor Tom Barrett stated the city could offer a package worth about $25 million to support the arena.  It would include: $17 million in infrastructure, a $7.4 million city-owned parking garage at N. 4th St. and W. Highland Blvd., and the former Sydney Hih site. He’s also mentioned that  tools available to the city, such as tax incremental financing couldn’t be used directly for the arena as it is expected to be a tax-exempt property.

But Barrett told Rich Kirchen of the Business Journal, “Our tool (TIF) is used for the ancillary development, which is important to us.” With today’s plans showing associated, private, development in the Park East and on the BMO Harris Bradley center site this potentially could be where the city would play a larger role.