A Giselle For The Ages

Milwaukee Ballet resets the work in a Jewish town during WWII and the results are stunning.

The ballet Giselle, created in 1841, with music by French composer Adolphe Adam, was a huge success and has been in the repertoire ever since. It’s considered one of the greatest Romantic ballets. Milwaukee Ballet artistic director Michael Pink’s interpretation of Giselle sets the story in a small Jewish community at the height of World War II, a creative choice that worked beautifully and added a complicated depth to the classic story.

Still, it took awhile for me to see that. There was much to admire in the show – the acting abilities of the dancers in the midst of complex choreography, the tricks of lighting (courtesy of designer David Grill) and the welcome presence of the Milwaukee Ballet Orchestra. The Milwaukee Ballet has a knack for these full-scale productions, which are never a small feat. And unlike the ballet’s past productions, Giselle comes off as deceptively simple. The set has no moving parts, the costuming isn’t lavish. All of this is intentional and effective – the weight of the story and the crushing beauty of the choreography fill up the empty spaces.

Yet there’s a delicate balance that has to be struck between theater and ballet in a production like this. I’d argue that a narrative ballet shouldn’t lean too heavily on theater. All dancers need to be actors, but the dancing itself should carry the story and cause your emotional response. At the end of Act I, I wasn’t convinced this was the case. There seemed to be a lot of reliance on facial acting and repetitive indicating of feelings: for instance, Giselle (Luz San Miguel) constantly clutches at her heart in a show of decaying health, and her mother (Valerie Harmon) then expresses her concern. Even the love story seemed lacking. While San Miguel and Davit Hovhannisyan (as Albrecht) performed beautifully, I felt like I was doing a lot of inferring to convince myself their hasty courtship held any significance.

But this is where Giselle is tricky. You think that you’re watching a play unfold rather than a ballet, but the opposite is true. There’s a subtle magic to how this done in Pink’s production. The community is always dancing. The lead artists are always dancing. Musicians appear live on stage as part of the cast – a violinist, a pianist, a clarinetist, on and on, picking up where the full orchestra left off below stage. There is constant artistry and all of it has to do with meticulous choreography.

And all the while, Giselle is silently falling for Albrecht. Turns out, Albrecht is a German officer disguised in street clothes who is already engaged to the wealthy Bathilde (Rachel Malehorn). This revelation and the resulting grief are so intense that Giselle literally dies of heartbreak, and in the commotion, the community is gathered at gunpoint by the German officers.

This is where Act II starts, and it is without exaggeration the best hour of dancing I’ve ever experienced. Where Act I perhaps treads lightly over the mid-20th century’s tragic history, Act II thrusts it at you with an unapologetic fervor. It’s difficult to find the right words for the first vignette – disquieting? Supernatural? Incredible? All apply and none suffice. Act II opens with the community lining up slowly, removing their coats and weaving confusedly along in pale blue night gowns. The German officers corral them before a homicidal firing squad, and everyone is killed, their bodies hitting the ground.

The choreography that follows is startling, and I could’ve watched it all night. The deceased slowly rise, clutching themselves as if tending to a deep stomach ache. One by one they try a step, a leg lift, a spin, every movement labored with grief. Even when they reach a crescendo there’s something off about it all – too much elbow, a shudder before sticking a landing, the devastated shuffle of their feet. It was done so well. The whole thing centers around Albrecht’s haunted conscience as he tries repeatedly to apologize, to rectify his guilt in the presence of Giselle’s ghost and the unforgiving souls of her loved ones. While they stare him down with palpable hatred, crawl after him like so many vengeful zombies and challenge him repeatedly, Giselle floats in to offer her warm light, her blessed forgiveness.

It’s a scene I’m still thinking about, and this show is truly the Milwaukee Ballet at its best, technically and musically and emotionally. I’m serious, Milwaukee, I can’t imagine anything more worth your time. 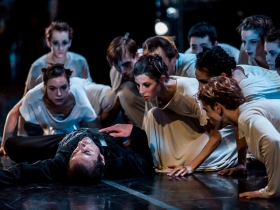 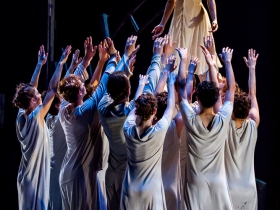 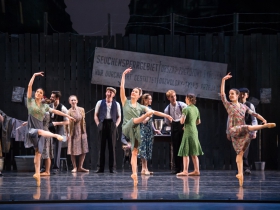 0 thoughts on “Dance: A Giselle For The Ages”