The bar on 50th and Vliet offers free shuttle bus to games, along with Happy Hour deals.

This week may have started off with snow but Brewers Opening Day is just a couple weeks away. If Spring hasn’t fully sprung in time for baseball and you’d rather not tailgate in scarves and gloves, the next best thing is free shuttle service from a warm, friendly bar. While many bars near Miller Park suspend their happy hour on game days, O’Brien’s Irish Pub (4928 W. Vliet St.) keeps it running. Granted, the deals aren’t exactly a grand slam (50 cents off Miller products, rails and select call mixers, 3pm-6pm, M-F), but the bar is still a winner.

The first time I stopped in was for my friend’s birthday celebration. O’Brien’s has a generous birthday club offer that includes a table-top three-gallon beer tower, a t-shirt and a souvenir glass. I stopped in yesterday to sample their happy hour and catch some of the Brewers spring action against the A’s on one of the tavern’s many TVs. When I’m on the West Side I’m in close proximity to my dad’s fridge full of High Life, and my taste for craft beer magically dissipates. I ordered a pint of the Champagne of Beers (regularly $3) and a bowl of their Guinness Onion Soup, a tasty Irish twist on the classic French Onion.

While domestics dominate at O’Brien’s, they have 18 taps that include standard imports (Guinness, Smithwick’s, Harp, Newcastle) and crafts from New Glarus, Leinenkugel’s, New Belgium, Lakefront and Bell’s. About 30 bottles and cans round out the carbonated section of their drink menu, and the potent stuff is pretty common fare. The select call mixers included in their happy hour are Jack Daniels, Captain Morgan, Seagram’s 7 and Absolut. Nightly drink specials (starting at 7pm) add power to their lineup, with Monday 2-4-1 taps, Tuesday $3 Blue Moon, PBR Silos, and $4 Jager Bombs, Wednesday $3 Mexican beers and Schlitz Silos, Thursday $3.50 all imports (tap and bottle), Saturday 16oz Schlitz, PBR and High Life for $3, and Sunday $3 High Life, High Life Light and $4 bombs.

The free popcorn at O’Brien’s is a nice touch, but if you’re heading to the ballpark you may require a bit more nourishment. As a proud Irish American Bar, O’Brien’s features some of the staples: Guinness Irish Stew, Irish House Chips and Shepherd’s Pie, along with burgers and buffalo wings. A couple appetizers caught my eye, first off, the Basket O’Bacon. It doesn’t get more basic than 12 strips of premium cut bacon, but that kind of simplicity is genius. On the original side, the Creamy Reuben Rolls (egg rolls stuffed with diced corned beef, Swiss cheese, cream cheese and their Jameson and fresh herb infused sauerkraut with a side of bistro sauce) are intriguing. The nightly food specials are Monday $5 pizzas, Tuesday $6 Philly Dip and $7 burger of the week with a side, Wednesday $6 giant tacos (chicken or beef), Thursday 55 cent wings and $6 BBQ pork sandwich with chips, Friday $7 Cod sandwich, $10 Cod Fish Fry and $4 clam chowder, and the $7 burger of the week with a side repeats on Saturday.

There is ample space at O’Brien’s for your biggest Brewers crew, with an extra room and bar in the back, even a fireplace in the center. The bar gets lots of light as it looks south onto Wick Field. The wood interior is decorated with vintage photos and posters of the Brewers, Packers, Ireland, Guinness, Miller, Harley, and some sports memorabilia. They have shuffleboard, darts, Golden Tee arcade, a South Park pinball machine, four gambling games, and a Touchtunes digital jukebox. The night before Opening Day (April 5) will be a full moon and Blue Moon is sponsoring a 2-4-1 deal, hopefully an omen of winning ways down in the valley.

O’Brien’s opens at 3pm Monday through Thursday and 11:30am Friday through Sunday. Any time of day, any day of the week you can get a shot of Jameson for $3.50. If you don’t make it out to Miller Park I suggest a Jamo shot for every Brewers run. Depending on the Crew’s output that game, you may end up with your very own happy hour(s). 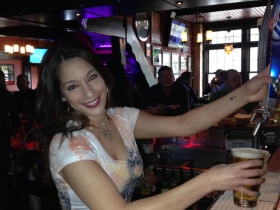 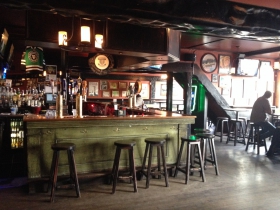 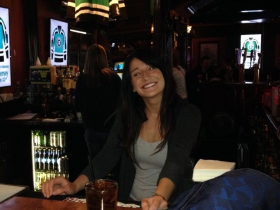 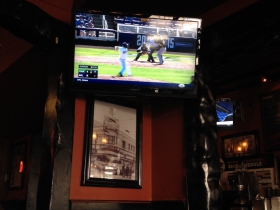 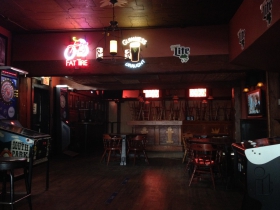 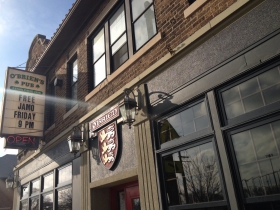