Gillespie Park, at 14th and Wright, is outgrowth of neighborhood anti-crime effort.

By Jabril Faraj, Milwaukee Neighborhood News Service - Mar 18th, 2015 11:35 am
Get a daily rundown of the top stories on Urban Milwaukee 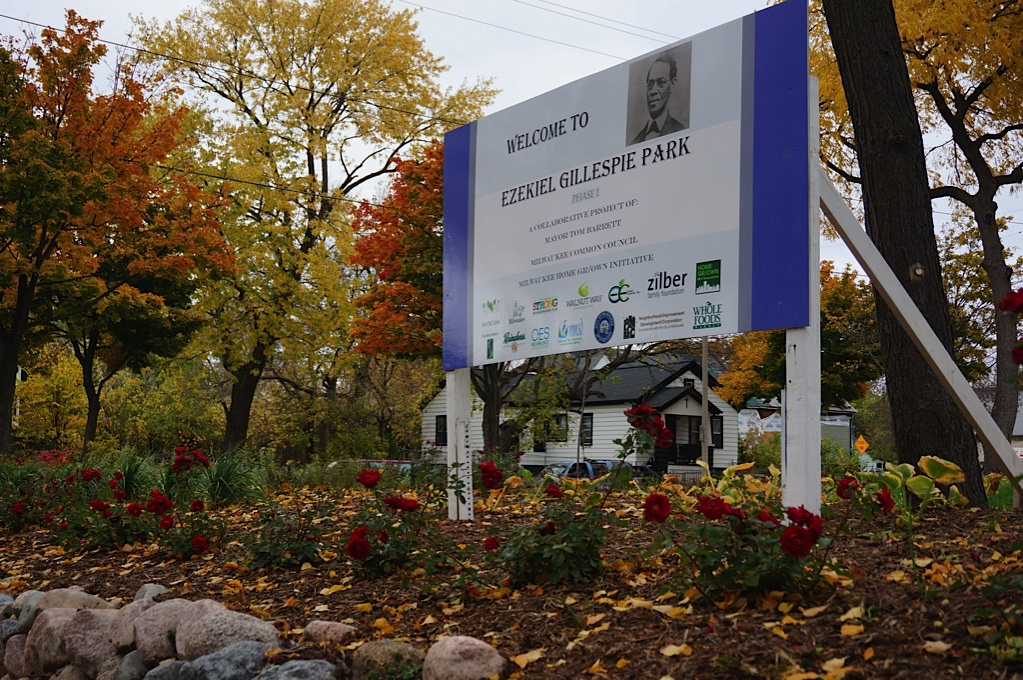 Ezekiel Gillespie Park, on 14th and Wright, is a symbol of positive neighborhood action in Lindsay Heights. (Photo courtesy of Tim McCollow)

Virginia DuPriest has lived at 2450 N. 14th St. for most of her life. The 68-year-old has been in the house since 1956 when her parents bought it, becoming the owner in 1991. However, as has happened with many central city neighborhoods, the area declined quickly as fewer owner-occupants resided there.

“In the ’80s and the early ’90s, the neighborhood really got drug-infested, crime, everything,” DuPriest said. “Our neighborhood had gotten so bad, the drug dealers were actually coming in your yard hiding their drugs under your porch.” 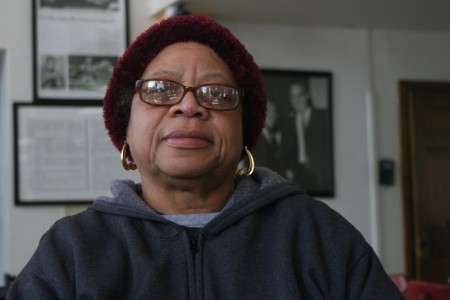 Virginia DuPriest, who lives near 14th and Wright streets, was instrumental in the new Gillespie Park. (Photo by Jabril Faraj)

But one experience, in particular, sticks out in her mind. DuPriest’s young granddaughters, who are grown now, were jumping rope in front of the house, one day. “This guy just got out of a car all drunk and approached them and wanted to jump rope with them,” she said. “I’m glad I was in the door … cause anything could have happened.”

That’s when DuPriest and her neighbor decided they were “going to do something about all the crime.” DuPriest said they started calling the police to report crime, got neighbors involved and “cleaned up” the neighborhood.

While DuPriest and her neighbors already have a lot to be proud of, now they have something else. Ezekiel Gillespie Park, completed last fall, sits on the corner of 14th and Wright only a couple houses away from DuPriest’s. Amenities include a border of rose bushes and a “food forest” with 15 pear and apple trees, as well as about 150 raspberry bushes. In addition, the park, which was built on a plot of land that experiences continual flooding, is designed for storm water management, with a built-in “rain garden” to capture excess water and a 1,000-gallon cistern hidden under the porous pavers used for the park’s paths.

“It’s the most sustainable park in the city of Milwaukee,” said Tim McCollow, a project manager with HOME GR/OWN.

In 2000, along with other Lindsay Heights residents, Larry and Sharon Adams created Walnut Way Conservation Corp.ration. Since then, Walnut Way, which is located about five blocks from Gillespie Park on 17th and North, has been instrumental in aiding the neighborhood’s recovery through civic engagement, environmental programs and economic development.

So, a couple years ago when DuPriest and the Saint Paul Neighborhood Association, which she’s a part of, decided to create a housing committee to address the boarded-up houses and vacant lots in the neighborhood, they went to Sharon Adams for help.

McCollow said the last time the city took an official tally there were 2,454 vacant lots in Milwaukee, the majority of them located in the poorest parts of the central city, in and around the 53206 ZIP code. “They are concentrated in an amazingly small area,” he said.

In spring 2013 a group of five UWM students from the Graduate School of Architecture and Urban Design, with the help of Walnut Way and the housing committee, completed a report that identified 89 vacant lots in the area constrained by North Avenue, Center Street, Teutonia Avenue and 18th Street. 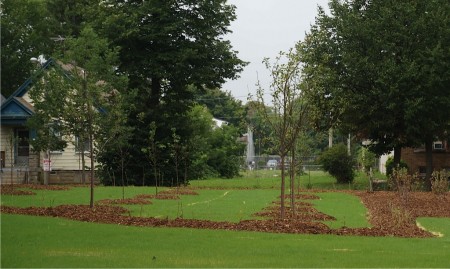 Through this process a parcel of three adjacent vacant lots on the southeast corner of 14th and Wright was identified. “It’s on a corner, it had visibility, it was near other areas where there was some home ownership so it made sense,” said Carolyn Esswein, who oversaw the group of students.

But the space isn’t just a park. Those associated with the project view Gillespie Park as a multi-faceted solution to a number of neighborhood issues.

Jeremy Davis, who works in urban agriculture and landscaping at Walnut Way and was involved in the park’s creation, said many of things this space accomplishes fall directly in line with eight focus areas detailed in the Lindsay Heights Quality of Life Plan, released in 2008.

“[Gillespie Park] really falls into stabilizing our housing areas, it falls under life-long learning, in terms of providing that job training and employment for men of the neighborhood, and it falls into our health and wellness and healthy eating, too,” said Davis.

Walnut Way’s own Blue Skies landscaping crew employed neighbors for the project and was “integral to the process,” said McCollow. Simon Landscaping’s veteran crew was also involved with the build and was able to provide valuable training for Blue Skies regarding “green” infrastructure.

The sustainable park is right in line with the City of Milwaukee’s 2012 Sustainability Plan. But it’s not just environmentally friendly features that go toward creating a real, working community asset — it’s the process, as well.

Multiple meetings — between residents, community groups, the UWM students and city officials — ensured the final product would be something residents could truly utilize and enjoy.

Many area residents are elderly, so that was a large consideration that went into the planning. They wanted a quiet space that the older people could come to and relax. Benches are being designed for that purpose — another process McCollow said neighbors took particular interest in — and will be installed this spring.

“We didn’t want it to be a kiddie park,” DuPriest said. “But we figured … at least the kids could enjoy the fruit that’s on the trees.”

“In all these projects, if the neighborhood isn’t part of the discussion … there’s not as much value because it’s outsiders coming in,” Esswein emphasized. “But when it’s the neighborhood — residents are involved — there’s a lot more success.”

What’s in a name?

Ezekiel Gillespie was an African-American freedman who came to Milwaukee from Tennessee and, in 1965, won a landmark case securing voting rights in Wisconsin. He was also a founder of Wisconsin’s first African Methodist Episcopal church.

“We threw out some names and everyone loved Gillespie immediately once they knew the story,” said McCollow. “The name went up pretty quickly and it stuck real quickly.” 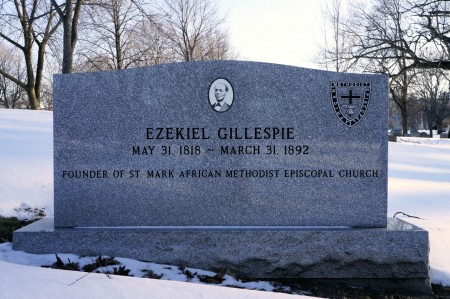 In keeping with the name and Gillespie’s legacy, a get-out-the-vote rally, organized by State Sen. Lena Taylor and Ald. Russell Stamper, was held at the park last November. That event is indicative of the kind of engagement those involved in the park’s creation hope it will inspire.

“The voters rally was not anything that was planned by HOME GR/OWN or planned by Walnut Way,” Davis said. “It just kind of came organically.”

“I think the beauty of Gillespie is the level of neighborhood involvement,” said McCollow.

And even though a park can’t change a neighborhood, it can be a symbol of something positive. “I think it’s brought … a little more togetherness,” DuPriest said. “People are getting more connected and we’re learning to meet with our neighbors and know who our neighbors are.”

“So often … we’ll see development happening but if the community is not engaged then … maybe not a lot has changed other than the physical landscape,” said Davis. “But, through this process, neighbors were involved from the get-go in the planning process — that’s empowering.”

McCollow said Gillespie Park was a “signature” project for HOME GR/OWN in 2014; the initiative plans to develop 20 orchards and six mini-parks across the city this year.

“With the neighborhood’s involvement, we were able to create a green space that really works on multiple levels,” he said.

More importantly perhaps, that accomplishment comes as the first foray into a new approach to developing public space. “The City of Milwaukee doesn’t do top-down any more,” McCollow said. “That’s not how neighborhoods get rebuilt.”