His campaign for president seems ridiculous. So why is he rising in the polls? 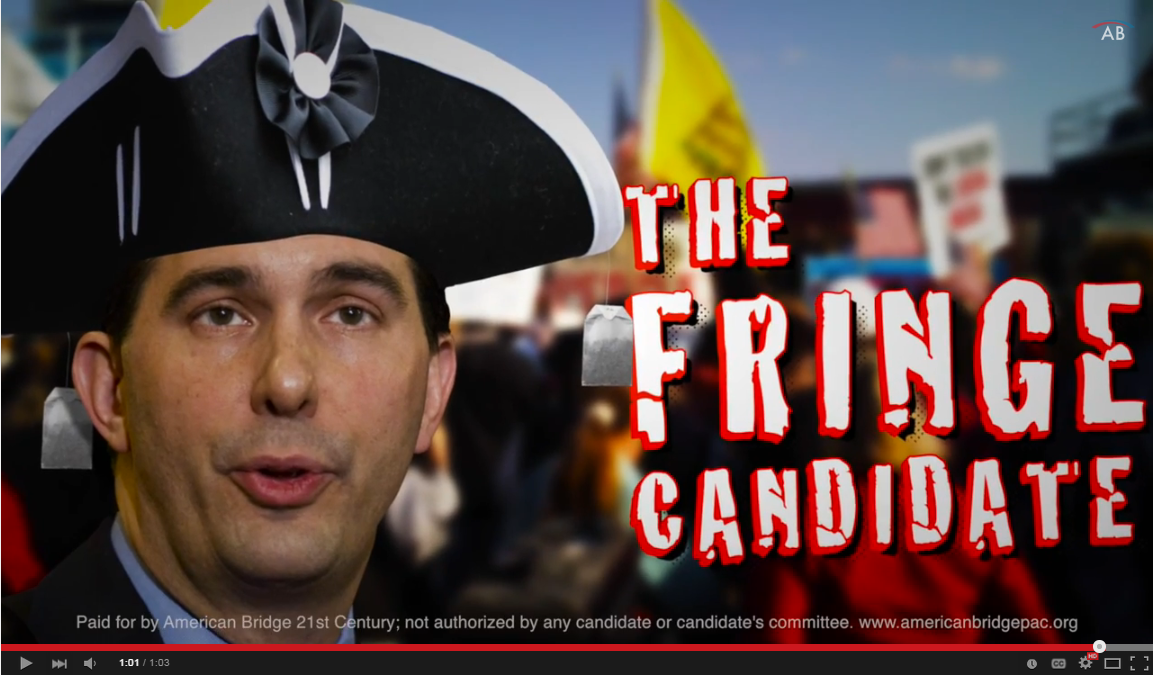 The Fringe Candidate. Click the image to watch the video.

That Scott Walker. What a fool.

Yep, the consensus in the media nationally is that Walker has made a string of silly errors in his run for president.

After all, during his appearance in London, he declined to say if he believed in evolution, which is established scientific doctrine. And he later refused to say whether Barack Obama is a Christian (doh, he is) or whether the president loves America. Finally in an appearance before the Conservative Political Action Conference, or CPAK, that really set off a storm, the Wisconsin governor suggested that handling pro-union protestors in Madison was comparable to dealing with the Islamic terrorists in ISIS.

Even before this last, most outrageous comment, Matt Lewis for Daily Beast roasted Walker as not ready for prime time in a column entitled “Scott Walker’s Terrible, Horrible, No Good, Very Bad Answer.” And the liberal American Bridge created a punchy, one-minute online ad that gleefully ridiculed Walker.

Over at the Milwaukee Journal Sentinel, where only their conservative commentator, Christian Schneider, gets to make intemperate comments, veteran political analyst Craig Gilbert gingerly described Walker’s remarks as a “classic campaign flap — part media creation, part candidate stumble,” which “raised questions about the governor’s ability to navigate a fairly routine media gantlet on the presidential stage.” This won Walker the kind of press attention “he didn’t bank on and might have easily avoided,” Gilbert wrote.

Of course, if it was so easily avoided, Gilbert might have asked himself, why didn’t Walker, a skilled and extraordinarily disciplined campaigner, avoid this alleged stumble? Perhaps because his comments were carefully calculated to get him attention and win the adoration of conservatives.

Not long ago, Walker was getting mentioned as a dark horse candidate, at the back of a long list of candidates for the Republican nomination. He had begun to move up in recent months, but now, after three weeks of dominating the news, with an avalanche of free publicity about him, Walker is getting widely viewed as second only to front-runner Jeb Bush.

As Doyle McManus wrote in the Los Angeles Times after CPAC ended, “Here’s what we learned: Bush has staying power, despite conservatives’ suspicion that he’s a closet moderate. Scott Walker, the governor of Wisconsin, is hot — the new more-conservative hope to stop the Bush juggernaut. Sens. [Ted] Cruz (R-Texas) and Marco Rubio (R-Fla.) could rise if Walker stumbles. Chris Christie looks like a spent force.”

Yes, while all those headlines and pundits were obsessed with Scott Walker, little was getting written about Christie or Rubio, other than to occasionally suggest how much more sensibly they would have answered these questions.

As for the idea that Walker made mistakes, he can only win the Republican nomination by running to the right of Bush. His comments — and all the buzz they set off — helped Walker dramatically showcase his more red meat-than-Jeb persona to conservatives across America.

Those who see Walker’s comments as outrageous apparently haven’t noticed how the Republican Party has changed. This is not the party of Dwight Eisenhower in the 1950s or even Ronald Reagan in the 1980s. Let us consider the beliefs of GOP voters, circa 2015.

Evolution? Only 43 percent of Republicans believe in it. Walker’s non-committal response as whether he believes in evolution arguably makes him moderate compared to GOP primary voters he is courting.

Is Obama a Christian? An incredible 54 percent of Republicans actually believe Obama is Muslim, 29 percent are unsure of his religion and just 9 percent believe he’s Christian. In that context, Walker’s statement that he doesn’t know if Obama is Christian once again makes him a party moderate.

Does Obama love America? Hell no, according to 69 percent of Republicans. Walker’s refusal to say yes or no is, by contrast, diplomatic, even as it signals his doubts to conservatives who hate the president.

And of course, once all the media hubbub erupted about these comments, Walker strategically dumped on the press for its “gotcha” agenda, adding “they want to talk about things that I don’t think most Americans want to talk about.” That won Walker a new round of stories and once again sent signals to conservatives, among whom just 27 percent say they trust the media.

In short, everything Walker was saying echoes rock-bed Republican beliefs. Of course sophisticated party leaders may not share these views. But that’s not how you get elected in red states these days. Nor is it how you win viewers at Fox News, which offered no criticism of Walker’s comments on evolution and Obama.

Walker’s comparison of union protestors with the murderous jihadists of ISIS, by contrast, was more audacious. Still, by 2010, just 33 percent of Republicans viewed unions favorably, and by 2011, when Walker proposed ending the collective bargaining rights of public employees, polls showed Republicans supported this by 54 percent to 41 percent.

Since then, there have been no specific polls I could find, but the bludgeoning of public employees by politicians like Walker and Christie has undoubtedly helped gin up the distaste of conservatives for government workers. After all, they’re mostly Democrats, aren’t they?

Moreover, Walker’s outrageous comment immediately elicited follow-up questions from the media demanding to know how he could make this comparison, which gave Walker another round of press attention where he clarified and softened his remarks. As I’ve previously written, Walker is a master at subtly modifying and continuously redefining his comments for strategic advantage and to deceive people about his real views. The governor’s performance over the last few weeks could be used in a masters class teaching prospective candidates how to rise in the Republican presidential primary.

It’s been interesting to see dumbfounded members of the media fulminate about Walker’s slippery signal sending. The correct answer for a Republican, Matt Lewis insisted, is “Yes the president is a Christian. His policies are bad.” Then, after finishing his coaching, Lewis asked, “Why is it so damned difficult for someone to say that Obama is a Christian who loves America—and he also happens to have been a really bad president? Why not grant him this small concession? He’s never going to be on the ballot again, so why are Republicans still fighting the last war?”

But it’s precisely because Obama won twice that Republicans can’t forgive him and are still angry at him. So why would Walker bypass an opportunity to pick at that scab?

Even conservatives in the media jumped on Walker’s comments about union protestors. Jim Geraghty of the National Review offered this blast: “First, taking on a bunch of protesters is not comparably difficult to taking on a Caliphate with sympathizers and terrorists around the globe, and saying so suggests Walker doesn’t quite understand the complexity of the challenge from ISIS and its allied groups. Second, it is insulting to the protesters, a group I take no pleasure in defending. The protesters in Wisconsin, so furiously angry over Walker’s reforms and disruptive to the procedures of passing laws, earned plenty of legitimate criticism. But they’re not ISIS. They’re not beheading innocent people. They’re Americans, and as much as we may find their ideas, worldview, and perspective spectacularly wrongheaded, they don’t deserve to be compared to murderous terrorists.

That’s a powerful, much-needed conservative chastisement. But it unwittingly raises an interesting question: is the National Review out-of-touch with where conservatives are on the issues today? Frankly, when you look at these polls on Republican voters’ beliefs, it shows how far removed the party of Reagan is from his views on the issues. It’s a little scary. And that makes Walker look like their dream candidate.

72 thoughts on “Murphy’s Law: Is Walker Crazy Like a Fox?”