Last weekend, the “Mama Tried” motorcycle show attracted enthusiasts from all over to revel in the craftsmanship and care of a select band of choppers. While Frank’s Power Plant (2800 S. Kinnickinnic) may not have been an official partner, it’s likely that some hog fans stopped in at the Bay View establishment for a few cheap cans of beer.

Inside the two-room corner bar there are three vintage cycles. The centerpiece, above the cash register behind the bar, is a retro motorized bicycle flanked by two paintings of the neighborhood. The happy hour at Frank’s, which runs from 4pm-8pm, Monday through Friday, is a no-frills, working man’s, biker-friendly chunk of cheap drinking. It features $2 domestic pints (Schlitz, PBR, Old Milwaukee) and whatever keg they’re trying to finish. The bar manager, Becky, makes her own apple pie shots (with Great Lakes Roaring Dan’s Maple Rum) that are only $2.

Frank’s is a destination for discount drinking any night of the week, no matter how late. Pints of Riverwest Stein, Sprecher and Spotted Cow are $3.50 all the time. When I visited last week they also had New Glarus Cabin Fever, Great Lakes Edmund Fitzgerald, Lagunitas IPA, Lakefront IPA, Guinness, and MKE’s Louie’s Demise on tap. (They always keep a Lakefront, MKE and Guinness keg around.) Those speciality beers are $4-$5.

The go-to cheap brew at Frank’s is wrapped in aluminum, with over 40 tall boys and almost 20 short cans in stock. Blatz 12 oz’s are $2. I was told by my bartender that in numerous taste tests PBR Light beats out regular PBR. Personally, I haven’t had PBR Light since my college days from a keg, but Frank’s has $2 cans if you want to do independent research. (They also have $2 cans of PBR NA, for those giving up alcohol this Lent, or any time of year.)

The booze selection at Frank’s is standard, but it’s worth reiterating their happy hour’s homemade $2 apple pie shots. If you’re hungry, they’ve got a selection of edibles, including chips, candy, beef jerky, frozen pizza, pickled eggs and pickled sausage. Frank’s sets itself apart from nearby bars with an adjacent venue room, where I’ve performed stand-up comedy on more than one Tuesday night (at the Duck and Cover Open Mic). When comics aren’t pacing the stage Frank’s has live music every weekend and on the occasional weekday. They also have themed music nights, with Metal Mondays and Wildkat Wednesdays (various groovy genres).

If you come on an off-night the stage room also has a Ms. Pac-Man/Galaga arcade, dart board and Rolling Stones pinball machine for your electronic entertainment needs. If you visit Frank’s this Friday night they will be hosting one of the many Arte Para Todos festival shows, complete with a Stella Artois Cidre special. Catch the sounds of I’m Not a Pilot, Nightgown and Thriftones (plus a live art performance by Amanda Iglinski and Thaison Nguyen) with $3 bottles of the Belgian cider all night. 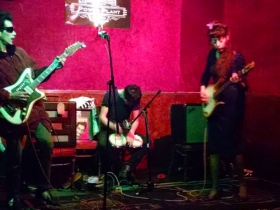 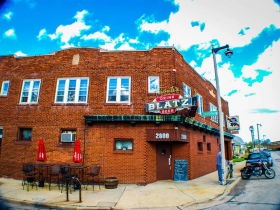 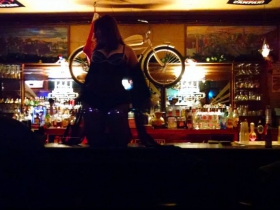 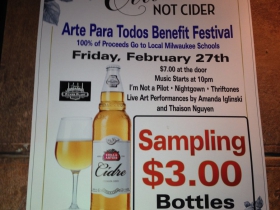 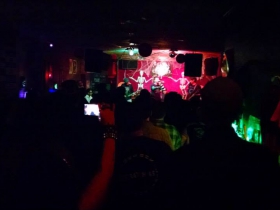