An equally impressive roster of environmental projects are in progress that will further improve the ecological and environmental quality of Milwaukee’s downtown rivers.  These projects are being driven by a combination of efforts to: (a) comply with Clean Water Act requirements and address water quality impairments associated with fecal coliform, PCBs, phosphorus, and other pollutants; (b) eliminate “beneficial use impairments” (meaning remedying impairments that prevent recreational and other uses) within the Milwaukee Estuary Area of Concern (AOC); (c) alleviate flooding problems along different sections of Milwaukee’s urban rivers; and (d) implement a regional green infrastructure system to better manage stormwater runoff throughout the Milwaukee area watersheds. The number of environmental projects recently completed or in progress is extraordinary (with more than 80 projects identified at present on a “Watershed Central Wiki” webpage focused solely on projects addressing beneficial use impairments relevant to delisting of the Milwaukee Estuary AOC).

Among the environmental restoration projects currently in progress or scheduled to be completed over the next several years are these:

Menomonee River concrete channel removal projects:  An initial $5.4 million project completed during 2013-14 removed a 1,100-ft section of steeply sloped concrete channel installed in 1965 and replaced it with a naturalized channel, restoring fish passage to a 17-mile upstream section of the Menomonee River extending to the Lepper Dam in Menomonee Falls.  A second project scheduled for 2015 will remove an additional 2,600-section of concrete-lined channel extending downstream to I-94 and replace it with a naturalized channel. This $5.25 million contract is being managed by the US Army Corps of Engineers using funded awarded by the Great Lakes Restoration Initiative.

Western Milwaukee Flood Management Project: This project will naturalize 700 feet of stream bank bordering the Menomonee River at the site of the former Sears Outlet store. The project will also “daylight” a 490-ft section of Schoonmaker Creek (confined at present to an underground sewer) and remove approximately 115,000 tons of solid waste from the flood plain. 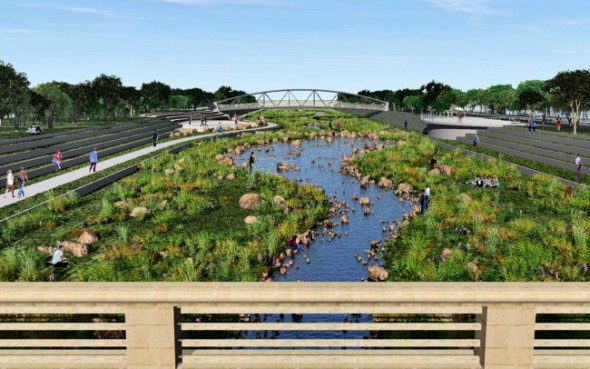 Kinnickinnic River Corridor Plan: Planning for this approximately $50 million project has been in progress since before 2009, and will reduce flooding and restore a naturalized stream channel along an approximate 2.5 mile section of the Kinnickinnic River. The project will create an extraordinary and much-needed green space within the center of Milwaukee’s south side neighborhoods. The project builds on a $22 million project completed in 2009 that removed approximately 170,000 cubic yards of PCB-contaminated sediment from the downstream portion of the Kinnickinnic River. The first phase of the current project was completed in 2010-11 with removal of concrete from the river bed downstream of the South 6th Street bridge.  Future phases will improve sections of the KK river between South 6th Street to South 27th Street. 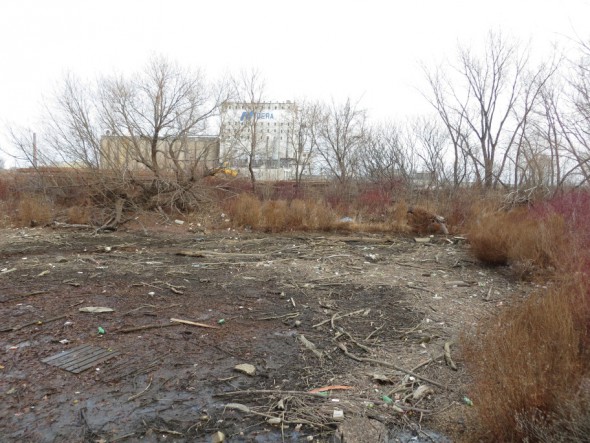 View of existing conditions within the seiche wetland area. (2012)

Bay View Wetland Restoration Project: This project is focused on restoring a 6.5 acre wetland located within the former Grand Trunk railroad property in Milwaukee’s inner harbor.  The wetland is believed to be the last remaining remnant of several thousand acres of wetlands that existed within the Milwaukee Estuary prior to European settlement.  A master plan was completed in 2014.

Lincoln Park/Milwaukee River Channel Phase 2 Sediment Cleanup Project: Work on this $15 million project reportedly began in November 2014 and will be completed in early 2015. The project will remove an estimated 36,000 cubic yards of PCB-contaminated sediment from nine areas along a one-mile section of the Milwaukee River extending upstream from the Estabrook Park Dam to Lincoln Park. A majority of project costs are being paid by the U.S. EPA (via funding under the Great Lakes Legacy Act). This project will complete sediment cleanup within the Lincoln Park section of the Milwaukee River, and follows an earlier $20 million project completed in 2011 that removed 125,000 cubic yards of PCB-contaminated sediment. 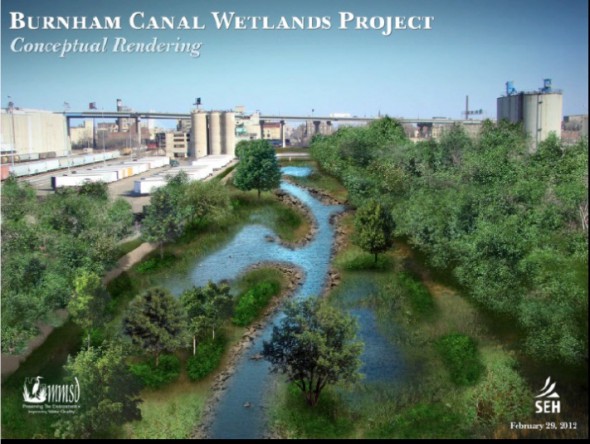 Burnham Canal: View facing east of a conceptual rendering of the future wetlands. Image from the Menomonee Valley 2.0 website.

Burnham Canal Wetlands Restoration Project: This project led by MMSD will transform a 2,700 foot section of an historical navigational canal into an 8-acre wetland. The 95- to 125-foot wide canal, with water depths up to 22 feet, is located within the east end of the Menomonee Valley. The canal was excavated out of former wetlands in the 1870s, but has been blocked for navigational use since the mid-1980s. The first phase of the estimated $6.5 million project will begin in 2015 with excavation and disposal of highly contaminated sediment present at the western terminus of the canal, and placement of a 4-foot layer of crushed concrete that will serve as a cap over remaining contaminated sediment as well as a stable base for the future wetland.  Approximately $2.1 million in costs will be paid for by Miller Compressing Company, which was identified by U.S. EPA as a source for the contamination.  The timing for construction of the wetland is subject to future funding availability.

Regional Green Infrastructure Plan: What I believe to be the most extraordinary environmental project (and one that may be exceptional on a global basis) is the Regional Green Infrastructure Plan being implemented by MMSD in collaboration with other local units of government. The primary goal of this plan is to develop sufficient green infrastructure by 2035 to capture up to an additional 740 million gallons of water in the urbanized areas of the watershed during a rainfall event, preventing this water from entering the sewers and from flowing directly into area waterways. Green infrastructure includes features such as green roofs, rain gardens, porous pavement, and native landscaping and is an alternative to construction of additional “gray infrastructure” composed of sewers, deep collection tunnels, or the wastewater treatment plant.  Although the increased use of green infrastructure to complement or replace gray infrastructure is a part of a global trend, Milwaukee’s plan is extraordinary in its scope, with goals that include creating 1,490 acres of green roofs on buildings, planting 738,000 additional stormwater trees, installing 1,190 acres of porous pavement, and converting 42,000 acres of land to green infrastructure.

The scope of green infrastructure to be implemented in Milwaukee is extraordinary as summarized on this table from MMSD’s Green Infrastructure Plan. 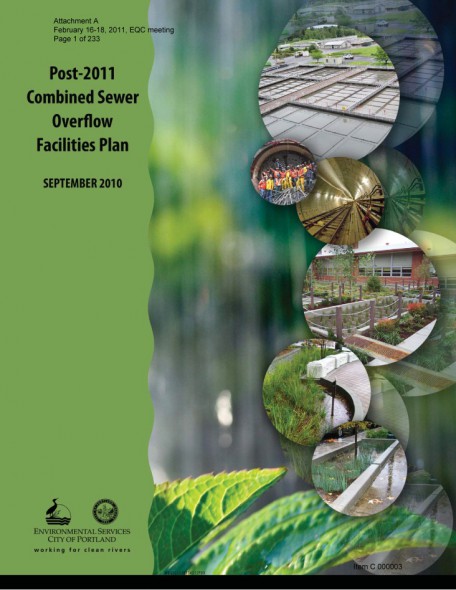 The Regional Green infrastructure Plan is a perfect complement to Milwaukee’s water strategy, as it will convert a significant portion of the entire urban landscape into one  designed to protect and enhance water quality in a sustainable matter.

The true scope of the redevelopment projects being completed in Milwaukee’s urban waterfront area can be somewhat deceiving as they are scattered across a relatively large area and not necessarily linked in people’s minds with the equally impressive roster of environmental projects. The number, size, and quality of both the redevelopment and environmental restoration projects that are currently in progress or in advanced stages of planning are really quite extraordinary when considered collectively and as part of an ongoing transformation of Milwaukee’s freshwater landscape.  The Regional Green Infrastructure Plan being implemented by MMSD (also unmatched) will effectively extend Milwaukee’s freshwater landscape beyond the immediate waterfront areas to encompass up to 42,000 acres of land. Together these projects will only enhance Milwaukee’s already impressive stature as a city that is maximizing the public access and economic development potential of its freshwater landscape.