A year ago the Milwaukee Bucks were in the midst of their worst season in franchise history, but at least my friends and I were drinking $6 goblets of good beer during Molly Cool’s happy hour prior to tip off. But the Old World Third Street seafood joint closed right before this season started so we’ve been on the hunt for a pre-game happy hour replacement. One of the top contenders is Miller Time Pub and Grill, located at 5th and Wisconsin on the ground floor of the Hilton Hotel, just four blocks from the Bradley Center.

As a Milwaukeean it’s been weird to see Coors Light replace a Miller product as the official beer of the Bucks, but so it goes since the 2007 merger of Miller and Coors. If you’re nostalgic for Miller’s glory days, you’ll be a big fan of this bar bearing its namesake. The walls are covered with old Miller ads, booths feature a collection of Miller artifacts under glass, and the lighting above the bar appears to be from one of Frederick Miller’s original brewpubs. Also, at the top of every hour, a vintage Miller Time commercial plays on the TVs, which is a real treat.

The most valuable player at the Miller Time happy hour is the $2.50 half-liter boots of domestic beer. That includes Miller Genuine Draft, High Life, Miller Lite and the recently adopted all-star, Coors Light. If I’m not having a High Life in its retro, sexy bottle (I’ve got a thing for the Girl in the Moon) the mini-boot is the next best vehicle. It’s a great deal if you don’t demand complexity from your beer. That’s not to say Miller Time eschews craft brews. The beer menu features 24 different taps and about 45 bottles. The bar also has that rare but much appreciated amenity, free seasoned crackers.

My friends and I stopped in at Miller Time last Wednesday before an exciting Bucks overtime win against the Lakers. The staff brought us tiny boot samples of their latest seasonal tap, Blue Moon First Peach Ale, a subtly sweet brew that reminded me of one of my favorite fruit beers, St-Ambroise Apricot Wheat Ale from Montreal. I got a single order of Spicy Asian wings, which are one of the $6 appetizers available during happy hour. They were solid, nothing to write home about, but I did get an extra wing and a rogue sweet potato fry. The other $6 happy hour apps are the loaded nachos and a stack of onion rings.

The rest of the happy hour team includes $4 rail cocktails, $5 house wine and the wild card, $5 beer cocktails. Beer purists would scoff at the idea of mixing beer with any other liquid, but Miller Time has found success with their “Girl on the Moon” (Blue Moon, Bacardi O, Peach Schnapps, pineapple juice plus cranberry juice) and their “Irish Root Beer” (Murphy’s Irish Stout plus Point Root Beer). I tried the latter and it was delicious, but I’m a sucker for an Irish stout and Point’s sarsaparilla, arguably my favorite.

If I were to dine at Miller Time I’d recommend a burger. The steakhouse is my go-to, topped with scrumptious rosemary mushrooms and a house-made steak sauce. Miller Time is one of the few places in town that dares to emulate the Minnesota icon, Juicy Lucy, a beef patty stuffed with a gooey (and usually dangerously hot) cheese center. While lighter, the turkey and black bean burgers both punch above their weight. Next time I think I’ll try the “Grill on the Moon,” featuring Wisconsin aged cheddar and shaved smoked ham melted between triple-stacked Texas toast, with a side of tomato soup. But I’d avoid any of the appetizers with the cheese sauce, as it’s close to the bland variety you’ll find inside the Bradley Center.

One of the best things about Miller Time’s happy hour is that it runs before Bucks games, 5pm-7pm, but also after the final whistle has blown, from 10pm-12am. The kitchen stays open until close, 1am, so it’s a win at Miller Time no matter the outcome at 4th and State, though our team has been on a hot streak lately. Go Bucks!

Inside the Miller Time Pub 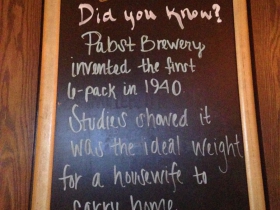 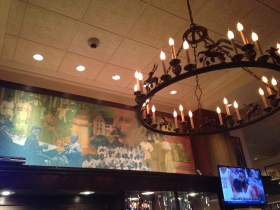 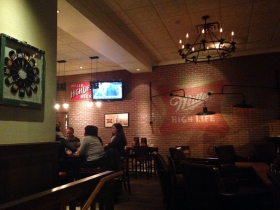 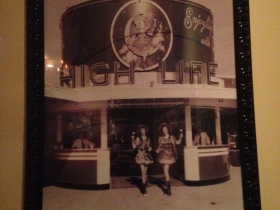 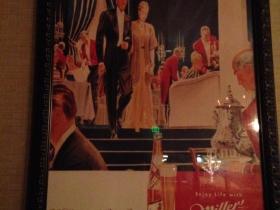 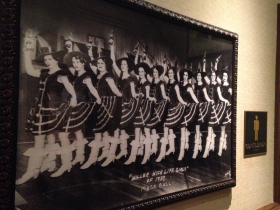