How Good Are Charter Schools?

The data is very encouraging, so why are liberals so opposed?

Recently the Milwaukee Teachers’ Education Association has made a major push against charter schools, often arguing they are ineffective educationally. So I decided to take a look at their performance.

Charter schools are independent public schools. Generally they have their own board of directors that contracts with an authorizing entity. In Milwaukee, UW-Milwaukee, the Milwaukee Common Council, and the Milwaukee School Board can authorize charters. (MATC can also authorize charters but has not done so.) The contracts with the authorizers usually emphasize the results the school is expected to obtain. Authorizers do not generally involve themselves in day-to-day school operations.

As public schools, charters also have to meet certain requirements. They cannot select their students. If there are more applicants than spaces the school is expected to hold a lottery. The charter schools cannot be religious. Within these requirements and the terms of their contract, the schools are free to make their own decisions. (Full disclosure: I am on the board of a charter school.)

Charter schools are sometimes confused with voucher or parent choice programs. In the Milwaukee Parental Choice Program a child from a low-income family can attend a participating voucher school and the voucher pays the tuition. The voucher is analogous to a full scholarship; a student can attend Marquette University, for instance, with the help of a federal Pell grant. Schools accepting vouchers are considered private schools and can be religious. They cannot require fees in addition to the voucher nor can they choose their students and must, like charter schools use a lottery if applicants exceed available space.

Recently the Wisconsin Department of Public Instruction (DPI) has started issuing “school report cards” on every Wisconsin public school including charter schools. Schools accepting vouchers are not included, which I think is unfortunate since parents considering those schools deserve good information. Competitive markets can only operate effectively if there is good information. In this regards, Governor Scott Walker’s proposal to allow schools to use tests of their choosing would represent a step in the wrong direction, making comparisons more difficult.

The DPI attempts to sum up the information on public schools with an Overall Accountability Score which determine whether or not a school meets expectations. The chart below shows the accountability scores for Milwaukee public schools, ranked from highest to lowest.

The biggest group of schools (light blue color) includes two groups of MPS schools: regular MPS schools and so-called “instrumentality charters.” The latter are schools that use regular MPS staff but supposedly are given more autonomy. However, so far as I know, none have their own board and in the case of layoffs, staff in other schools may have the right to bump teachers with less seniority in the charter school. Although some—particularly small teacher-led schools—have a charter-like feel, many differ little from regular MPS schools, for instance using the MPS standard curriculum.

The red color indicate MPS “noninstrumentality” charters. Unlike instrumentality charters, these are schools that have their own boards and hire their own staff, and thus may be quite different than traditional MPS schools. The final two groups are charters authorized by the Milwaukee Common Council (shown in green) and UWM (dark blue).

Looking at the Overall Accountability Scores, you can see charter schools fall all along the spectrum, but are clustered more heavily at the higher end of accountability scores. Their average score is somewhat higher than that for MPS schools and the difference is significant with 90 percent confidence. Among the authorizers, UWM’s average is highest, reflecting the lack of schools at the lower end, although the highest-scoring school in Milwaukee is chartered by the Common Council.

One of the measures included in the DPI report card is the “growth score.” This is calculated by comparing the math and reading scores of individual students with their scores in previous years. Schools that don’t have before and after scores are not included. This results in the elimination of new schools and high schools, where the testing only takes place in 10th grade.

The chart below shows the results for public schools in Milwaukee where growth scores can be calculated.

Again, charter schools fall throughout the range, but are clustered at the upper end, meaning the growth for students is greater. The difference is statistically significant at the 99 percent level. Charters authorized by the City of Milwaukee have the highest average, perhaps reflecting the emphasis placed on student academic growth by the city’s consultants, but the highest score was obtained by a school chartered by MPS. 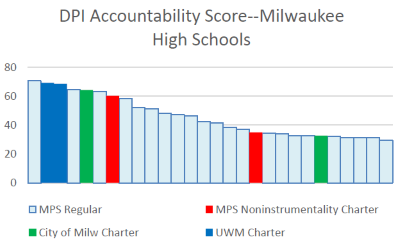 The next chart shows the DPI Accountability scores for high schools (as mentioned, no growth scores are available). The MPS high schools at the top of the scale have admissions requirements (full disclosure: as a member of the school board I authored the resolution to allow admissions standards). Again, charter schools cluster near the top. The average difference is statistically significant, but only at the 90 percent level.

The first message from this data is that charter schools more than hold their own when compared to more traditional Milwaukee public schools, but there is enormous variation among the charter schools.

The second message is that for parents searching for the right school for their child the question of its governance (charter vs. MPS, etc.) should be near the bottom of their considerations. The DPI information is helpful, but doesn’t by itself tell which school is best for a particular child. (It always helps to visit the school.)

It should be noted that neither the Overall Accountability Score nor the Growth Score is a true value-added measure, that attempts to separate the effect of school instruction from the many other factors that influence a child’s academic performance. Of the two, the Growth Score probably comes closer, but is still affected by the population of students the school receives.

At this point it is probably wise to bring up one of the standard cautions of statistics: that correlation does not prove causation. The better performance of charter schools as a whole could reflect any one of many factors, including the benefits of independence, the higher commitment of families choosing them to education, or a greater willingness of charter authorizers to pull the plug on weak schools. 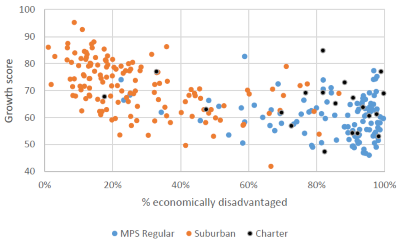 So far, this discussion has been limited to schools within the city of Milwaukee. The chart to the right includes suburban schools in the Milwaukee metropolitan area. The horizontal axis plots the percentage of students in the school who are considered economically disadvantaged. The vertical axis plot the school’s growth score.

As you can see, the surburban schools (in orange) cluster toward the left because they tend to have a small percentage of low-income students while city schools (in blue) cluster toward the right, with high percentages of low-income students. This huge difference is consistent with studies that find the Milwaukee metropolitan area heavily segregated. And you can see on average, lower-income students perform more poorly. The very large scatter, however, indicates that different schools can differ substantially in their success with apparently similar student populations.

One notable pattern is the apparent downward slope on the left side of the graph, for the orange schools. This suggests that learning in suburban schools drops with even small increments of students who are economically disadvantaged. But the wide scatter suggests that some schools are able to cope better than others.

The most persistent critic of charter schools has been the Milwaukee Teachers’ Education Association or MTEA. It, of course, has an obvious economic interest in supporting only MPS schools which are staffed by union members. Somewhat surprisingly, the MTEA has never been a strong supporter or enabler of instrumentality charter schools, which employ MTEA members, perhaps reflecting union preference for rule-based regimes.

In its opposition to charters the MTEA has often been backed by a variety of left-leaning organizations. The most recent incarnation goes under the name of Schools and Communities United (S&CS), which follows the lead of the MTEA when it comes to charter schools.

Other charter opponents are harder to figure. Considering the average enrollment in Milwaukee charter schools is 90 percent black or Hispanic, one might expect that organizations like the NAACP or Voces de la Frontera would embrace charters as giving more options to people they serve. Similarly one might expect that MICAH — the Milwaukee Inner-city Congregations Allied for Hope — would support giving residents of the inner city greater educational opportunities.

Nor is it clear why the local branch of American Civil Liberties Union considers charter schools a threat to civil liberties. Perhaps this grew out of its opposition to the vouchers program because of the church-state issue. However, charters are not available to religious schools.

In understanding the motivation of the groups opposing charters, it may be helpful to consider those at the opposite end of the ideological spectrum. On the right a large number of people take Ronald Reagan’s famous assertion that “government is not the solution to our problem; government is the problem” as their polestar. In their view, new government programs are always bad, privatization is always good. For someone with such a binary viewpoint, Barack Obama looks like a socialist.

The groups opposing charter schools, it appears, have adopted the Tea Party’s binary world viewpoint but reversed the values. For them, privatization is bad and government good. Thus the effectiveness of a charter school is a moot issue, in this view.

Last spring the MPS administration proposed that some of its lowest-performing schools be converted to charter schools. Under pressure from the MTEA, this initiative was rejected. Instead the schools are to be replaced by something called “community schools.” It is unclear what these would be. So far, nothing has been put forth.

A hint of what is meant by a community school is contained within a publication put out by Schools and Communities United, called Fulfill the Promise. It includes a profile of an MPS school, described as “a model of civic engagement.” Perhaps but this school is struggling academically: its MPS report card describes it as “fails to meet expectations,” the lowest category, and its rating for student growth is well under the state average. The article gives no hint of these problems.

If this school had been a charter school rather than part of MPS,  it’s likely the tone would have been lacerating, demanding that its charter be withdrawn. A taste of how this group treats struggling charter school can be gained from this article in the Shepherd Express.

In the long run, the strategy adopted by the anti-charter groups is likely to be counter-productive to their cause. By concentrating all their energies on fighting charter schools, rather than helping MPS improve to better compete against charter schools, they reinforce the impression in Madison that MPS is unable to reform itself without outside intervention. They may ultimately lend support to legislators proposing to create a recovery district to take over the lowest-performing MPS schools.

18 thoughts on “Data Wonk: How Good Are Charter Schools?”