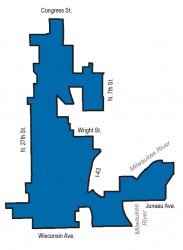 You might call it the first dramatic development in the upcoming spring elections. There is an open county supervisor position, the 10th District seat on the city’s West Side, vacated by first-termer David Bowen, who was elected to the Assembly in November as a a Democrat in the 10th District seat vacated by Rep. Sandy Pasch. We now know that Solana Patterson-Ramos will face someone named Supreme Moore Omokunde in the April special election for Bowen’s old county board seat.

So who is Supreme Moore Omokunde? He is the same guy as Sowande Ajumoke Omokunde, Supreme Omokunde and Supreme Solar Allah. He hasn’t used the “Moore” middle name before, but probably included it in this race to point out his connection to his mother, U. S. Rep. Gwen Moore. He asked to have that name on the ballot. This is the first run for office for the 37-year old, and comes 10 years after he was accused of slashing tires on vehicles rented by the Republican Party in the 2004 election. He spent four months in jail and paid a $1,000 fine.

Meanwhile, a third candidate for the open seat, Monique Taylor, who ran in the April 2014 aldermanic primary to replace Willie Hines, failed to submit sufficient valid signatures to gain a place on the ballot. Taylor had been one of the leaders of a group of black activists who had met with conservative groups from outside the city to discuss launching a recall against Milwaukee County District Attorney John Chisholm which has never happened. This same coalition has been involved with the anti-streetcar petition drive, as we have written. Taylor is a board member of the Social Development Commission, whose board chair Gerard Randall is a supporter of Ald. Joe Davis‘ run for mayor, and Davis is leading the charge against the streetcar. Taylor is listed as liking the the Stop the Milwaukee Streetcar site and her Facebook page also shows her liking anti-streetcar comments. All those connections didn’t seem to help her effort to run for office as she couldn’t even get enough signatures to get on the ballot.

The third candidate, Solano Ramos, also known as Solana Patterson-Ramos, is is a political activist who serves as a volunteer community liason for North Division High School and a member of the school’s Advisory Council. She is also a board member of the Social Development Association, headed the ACLU chapter at UW-Milwaukee and helped organize a “die-in” by students where they protested the killing of Michael Brown by a police officer in Ferguson, Missouri. She has worked for six years as an administrative assistant for the UWM African American Student Academic Services.

Stephanie Meeks, the President of the National Trust for Historic Preservation, will speak in Milwaukee on March 19th in an address at the Mackie Building’s Grain Exchange Room. She is expected to deliver an address on Historic Preservation Tax Credits. Federal and state tax credits have led to a boom in redevelopment of historic properties in the city and state in recent years. The federal credits are for 20 percent of the value of the redevelopment, and may be sold to third parties in exchange for cash.

Historic preservation is one of the rare issues to receive bipartisan support at the state and national level these days. Meeks is expected to be joined by Reed Hall, Executive Director of the Wisconsin Economic Development Corporation, and by architectural historian Jim Draeger. Her visit will coincide with the state legislature’s budget deliberations, which will include the tax credit program, and is intended to raise awareness of the program.

Clarification: An earlier version this story stated that Monique Taylor was supported by streetcar opponents. We’ve heard conflicting reports on that, but Taylor certainly appears to oppose the streetcar.

3 thoughts on “Plenty of Horne: Anti-Chisholm Candidate Fails to Get On Ballot”