Architects, developers and economic development officials gathered at Zimmerman Architectural Studios in the Menomonee Valley to learn about the state’s new historic preservation tax credit program. Under the revamped program, the state will award a 20 percent tax credit to qualifying projects that can be paired with a 20 percent federal tax credit. With bi-partisan support, the tax credit has been increased twice in the past year, going from five to ten percent in the latest state budget, and now rising to 20 percent in separate legislation. The last increase has already tripled the number of applications for the credit, according to the Wisconsin Historical Society’s Jim Draeger, whose agency manages the application process.

Draeger, along with Gorman & Co.’s Ted Matkom, Jonathan Beck of Alexander Co. of Madison, and Wayman Lawrence, a partner at Foley & Lardner, served on a panel that collectively explained how to execute a historic preservation tax credit program. The panel was moderated by Matt Jarosz, Director of the UW-Milwaukee Historic Preservation Institute, which was the event host along with the Milwaukee Preservation Alliance. 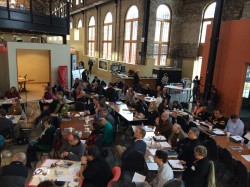 The crowd at How To Do The Deal

According to Draeger’s presentation, in 2012 $5.33 billion in historic preservation tax credit deals took place nationwide. With the average project costing $5.23 million and creating 78 jobs, 57,000 jobs were created nationwide. In Wisconsin, under the five percent tax credit (plus 20 percent federal) $84.5 million worth of historic preservation credit deals took place. In January 2014, the first month in which the increased credit was available, the state received $90 million worth of applications. Draeger stressed that this isn’t a program to create museums, it’s about adaptive reuse (an example of how Wausau converted a former courthouse into an apartment building was given). Using an example from a project in Green Bay, Draeger demonstrated that it is often cheaper to rehab an existing building than build a new one.

Matkom, the Wisconsin Market President for Gorman & Co., based in Oregon, WI, was the most animated presenter of the day. Noting that his firm does lots of work with various tax credit programs (affordable housing tax credits), Matkom drew laughs with his crack that the historic preservation program was great for lawyers. He broke down Gorman’s Brewhouse Inn & Suites project in the former Pabst brewery, and how they were able to make the project come to fruition using tax credits and EB-5 financing. Matkom also touched on the issue they had with windows, where the federal government approved their switch to aluminum from wood, but the city refused. Ultimately a compromise was reached, but Matkom noted later in the meeting that if the building has wood windows it will add up to a million dollars in costs (he noted they saved $900,000 on the Jackie Robinson Middle School project because MPS had replaced the wood windows before they bought the building).

Lawrence walked through all the tax implications of the credits, and what they can be sold for. For brevity’s sake and because I’m not a lawyer, I’ve included a scanned copy of his presentation. Suffice to say, you can’t sell a $1 million tax credit for $1 million; you end up with less. How much less depends on a number of variables.

A lively question and answer session ended the event, with examples of how non-profits could take advantage of the program and details on a much simpler tax credit program for individual home-owners.

The surge in applications reported by Draeger is evidence that the future for historic buildings in Wisconsin is much brighter. A local example is the Button Block building: the building has been on the market for years, but it recently sold to Bear Development. Bear plans to keep Joey Buona’s restaurant and add apartments to the upper floors, likely utilizing the increased tax credits.

Increasing the available capital for adaptive reuse projects via the tax credits is a decidedly pro-city move by Republican Gov. Scott Walker and the legislature. It will activate a number of under-utilized buildings in urban neighborhoods, and save a lot of buildings from the wrecking ball.  The result is likely to be an increase in the number of walkable and exciting neighborhoods in Milwaukee.