Proposal to fund NBA arena is really a Republican Tax Increase to help billionaire owners pay for the facility.

By Jennifer O’Hear and Lloyd Johnson - Dec 22nd, 2014 11:54 am
Get a daily rundown of the top stories on Urban Milwaukee 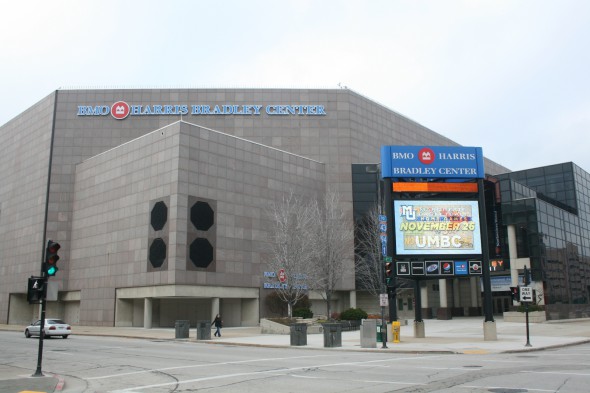 The much-discussed possibility of funding a new Bucks arena with monies from players’ income taxes, which has been dubbed a “jock tax,” seems almost oblivious to the fact that the tax already exists. These players already pay the state income tax. The question before us all is what is to be done with that money. We must not ignore the fact that using it to pay debt service on bonds to fund a new arena would divert the income tax revenue from what it is paying for now.

The citizens’ organization, Common Ground, comprised of over 30,000 families who live and work in Milwaukee, Ozaukee, Washington and Waukesha counties, at this point is opposing public funding of a new arena. We want to make it clear that shifting funds from one pot to another, regardless of the money’s origin as a tax paid by basketball players, is not a viable option for funding a new arena.

Indeed, shifting the “jock tax” funds to arena debt service would work like a shell game, creating an even bigger hole in the state budget than is already predicted for the next biennium. Watch the fast-moving walnut shells! Which one has the money under it? Is it still there at all? The Republican leaders quoted in newspaper stories seem to go along with the sleight of hand. Assembly Speaker Robin Vos (R-Rochester) called a jock tax is “a viable option.” Sen. Alberta Darling (R-River Hills), co-chair of the Legislature’s Finance Committee, also agreed that it is an option to be considered, especially because it doesn’t tax the general public, as she noted. But oh, yes it does. The Legislature and the Joint Finance committee will have to vote on new legislation in order to divert the income being collected from NBA players. If the Republican controlled Joint Finance Committee, Governor Walker, Assemblyman Vos and Senate Majority Leader Scott Fitzgerald (R-Juneau) go along with this idea, it is nothing more than a Republican tax increase on all tax paying citizens in Wisconsin.

In other words, making up for the funds being shifted from one category in the budget to another would in effect create a tax increase—or significant program cuts. The jock tax plan would divert scarce tax dollars from the already strained 2015–2017 Wisconsin state budget. We know that this next budget is facing a shortfall just to maintain existing programs, a shortfall that is projected to exceed anticipated General Purpose Revenue by at least $1.8 billion during the 2015–17 biennium.

What is a better approach? Common Ground would like to see the Bucks’ billionaire owners—Mr. Edens, Mr. Lasry and Mr. Dinan—pay for their new arena with their own money. Then the income taxes from NBA athletes and team employees could flow into the state’s general revenue coffers as they should, and Wisconsin taxpayers (upstate and downstate) would not have to be concerned about paying increased state income taxes—at least not for this project.

Let’s remember that the NBA just signed a new $24 billion TV contract, from which the Bucks are projected to get $90 million a year for the next 10 years in TV revenue. Why don’t the NBA owners institute their own “jock and owner” tax and float their own bonds to pay for their own arena? There’s a nice precedent out west, where the owners of the Golden State Warriors are coming up with $600 million of their own money to build a new arena in San Francisco.

If the Bucks billionaires float and pay for their own bonds, we would have a win-win-win for Milwaukee, for the Bucks, and for Wisconsin.

Lets speak the truth here.  The new Bucks owners need Governor Walker, Robin Vos and Scott Fitzgerald – all Republicans–to agree to divert tax money for the new arena.  If they go along with this idea, it’s nothing more than a Republican State Income Tax Increase on all of us.

6 thoughts on “Op-Ed: “Jock Tax” Will Actually Increase Your Taxes”