The Limited Charms of the UWM Gasthaus

Other than the beer selection, it’s a drab, deflating place. The good news it will soon be replaced.

This large subterranean tavern is located in the basement of the University of Wisconsin-Milwaukee Union and generates about $750,000 in annual revenue, with a return of nearly 10 percent. This is not bad for a featureless facility that operates according to an academic calendar, but plans for the renovation (see renderings below) of the UWM Union call for a more prominent location for the tavern.

The best thing you can say about the place, with its capacity of over 300, is that it is unlikely to be crowded. That, and it has an excellent selection of craft beers. The place could use the renovation, whose plan anticipates moving it to a first floor location where it can open onto Speights Plaza and really spread its wings.

The Gasthaus has none of the charm of its Madison campus counterpart, the Rathskeller, which had a head-start of decades and the advantage of a pleasant lakeside location, not to mention a homier design and atmosphere.

But the Gasthaus has seen happier days, and was nearly intimate during the early days of its existence in the brutalist-style union building, an architectural style we recently discussed here. Now the campus bar has the look of a roadside food mall — or that of a prosperous suburban high school cafeteria that decided to hold a kegger.

Beers here are not cheap, or discounted for that matter. If you are looking for specials of canned Pabst, it’s best to look off-campus. But the selection is impressive, and extensive, with 12 tap beer selections, nearly all of it the good stuff. But they will run you around $4 or more.

There is no beer list to guide the visitor, and the chalkboard announcing beers is somewhat out-of-date. The line  of bottled beers on display above the bar likewise does not conform entirely to that which is available. Some lonely wine glasses on the bar look as if they have not been filled in ages. There is no wine list to be seen, either, but hey — this is not the University of California — Davis union.

While you decide upon your beer, take a look around the room The walls are filled with projected television images from sports and other college-friendly stations. “Seinfeld” and “Friends” re-runs (from when the students were still watching Sesame Street) run alongside sports shows. One screen shows an on-line trivia game, with perhaps a few visitors playing.

The bar has an electronic dart machine, a couple of video games (Madden Football, Maximum Force) while there is a $1 foosball table beside a $1 pool table.

Just steps away is a room filled with regulation sized pool tables and a bowling alley, but that venue, sadly, is dry. All are open to the public.

The decor is minimalist, partly to accommodate the projected television screens, but there is still enough room here for a Budweiser clock, a Guinness mirror and plenty of Miller signs. Other than that, the effect is quite spare.

The bar is located rather toward the rear of the room, but not set off sufficiently to provide any sense of intimacy. All about are dozens of booths and laminated tables, serviced with wooden chairs, set upon a beige and green tiled floor with accents of wood (tables and floors).

The bar is also a restaurant, of the deep-fried sort, and each table boasts a roll of paper towels for the necessary greasy cleanup. Industrial-sized dispensers serve the condiment needs of the cuisine.

There is an acoustic tile drop ceiling covering much of the upper reaches of the place, and good thing indeed, since the reinforced concrete structure is acoustically hard otherwise. The bathrooms are located beyond the confines of the bar and are shared with other occupants of the basement.

Seasonal decorations are frugally created out of old receipts strung together on a line, with holiday greetings written upon them. These are decidedly not the products of the Peck School of the Arts students, unless they are working on the side at the pub, and, no, they are not.

The music is loud and rock-y, and not conducive to contemplative study,  unlike so much of the non-alcoholic portions of the union, which is jammed with cozy nooks and crannies.

As a destination, this place offers little inducement. But if you happen to be in the neighborhood, and if the neighborhood includes the basement of the school union, I suppose you are already there, so why not step in and have one? And then head your way over to a real bar, maybe Axel’s. 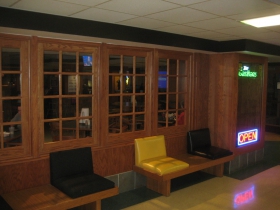 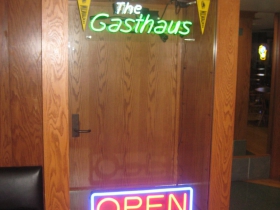 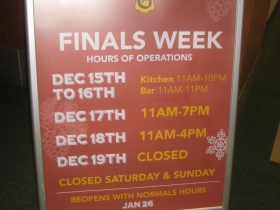 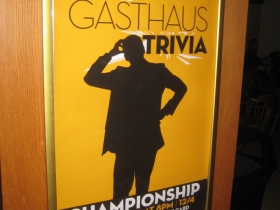 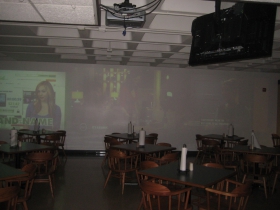 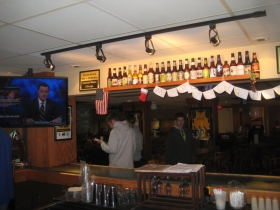 Note: the Gasthaus operates on an academic calendar, and will resume operation with the commencement of the spring semester on January 26th.

Since the release of these initial renderings, by Workshop Architects, the WI Dept. of Administration hired Engberg Anderson and Cannon Design to handle the project. The design is likely to change. 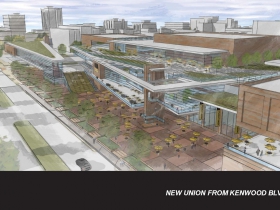 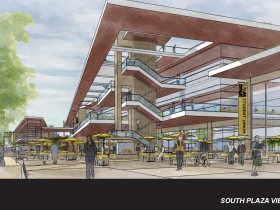 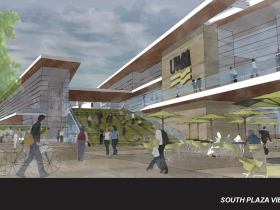 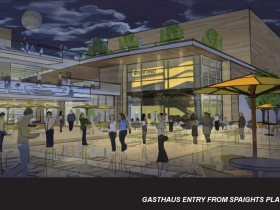 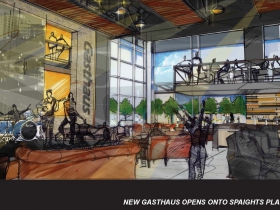 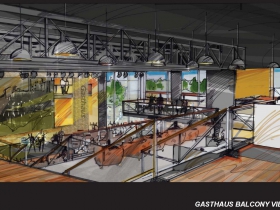 0 thoughts on “Taverns: The Limited Charms of the UWM Gasthaus”