It was $54 for king crab legs, and worth every penny.

The best crab I ever ate was in San Francisco right on the wharfs. But where to score a great crab dinner here in Milwaukee?

While you are out doing your holiday shopping at Bayshore Town Center, consider taking a break at Devon Seafood & Steak across from the Boston Store. You can’t miss the big, sleek chrome sign lit up along the road that divides it and Pot Belly from the mall’s interior. Inside, the atmosphere echoes the posh sign on the exterior – intimate lighting reveals an expansive, multiple-roomed venue that mixes a modern design with rustic touches, like the floor-to-ceiling wine rack separating the rooms. This restaurant has six locations throughout the United States, including Chicago and Miami.

Although beef is prominently featured on the menu, along with a few chicken dishes, Devon’s proprietors are focused on serving a wide variety of fresh seafood.  And it’s the availability of premium seafood that determines what shows up on their menu every day.

When we visited, that day’s very busy menu included such items as almond crusted tilapia with orange beurre blanc, grilled asparagus and seasonal berries for $24, and a seafood mixed grill that came with shrimp, scallops, salmon, a jumbo lump crab cake, whipped Yukon gold potatoes and grilled asparagus for $31.

Quick and friendly service got us started off with a Caesar salad for $7 topped with an asagio cheese crisp, which sets this one apart from most other Caesar salads. Other than that, it’s your basic Caesar. The dinner menu also offers a spinach and watercress salad with roasted beets, poached pears, candied walnuts, gorgonzola and a walnut vinaigrette for $9, and baby greens featuring watercress, feta cheese, dried cherries, toasted pine nuts and a honey balsamic vinaigrette for $7.50. And that’s it, as far as salads go.

While my date remained on solid turf with the 8-ounce beef filet with which she chose roasted potatoes and French-style green beans for $37, I had to go for the Alaskan king crab legs for almost $54. Yep – that’s not a misprint. The menu says $50 for the 1½-pound serving (which produces about 6 to 8 ounces of meat after coming out of the shells), but they must adjust that number according to real-time production costs. No, I’m not crazy for paying this price. I appreciate that the crabs had to be shipped all the way from Alaska very quickly and there were buyers to pay and fuel and transportation costs involved. So $50 is not, in my opinion, unreasonable.

Entrées here come with your choice of two sides, including, among other choices, lobster risotto, roasted cauliflower with bacon and onion jam, and whipped Yukon potatoes. I chose the roasted Yukon potatoes and the lobster mac n’ cheese. While the potatoes were caramely browned, silky and delicious, the mac n’ cheese is not going to win any awards. I couldn’t help but compare it to my memory of the lobster mac n’ cheese served at the Capital Grille which, in my opinion, is phenomenal. But this was okay. It was just a little on the bland side and I really couldn’t detect any lobster in it.

And the crab legs? Simply prepared and accompanied by lemon-butter for dipping, they arrived at my table with the shells already snipped open for me by the chef. The meat was sweet, clean and unfettered by any strong elements. In San Fran, the Dungeness sea crab I had was awash with succulent garlic-butter. It was delicious, but the crab itself was a tad overwhelmed by it. This crab, however, I could really taste. This just goes to show how much they must take their crab for granted in San Francisco where it is abundantly available right from the Pacific waters and far cheaper to process, whereas Devon’s Executive Chef Tony Hargrove realizes he and his staff must get the most out of the treasured crab’s natural flavor. The result: perfect. And well worth the cost!

My date’s steak was on the money, too. She ordered it medium-well and that’s how she got it, all ensconced in char-grill blackened goodness. A little too well done for my taste, but it was filet mignon heaven, nonetheless. The green beans had a delicate taste and a firm snap – just as they should.

Ordering from an impressive wine list and a fully stocked bar with some creative cocktail inventions of their own, my friend had a 9-ounce sauvignon blanc for $14 and I bravely ordered their own “X-Rated Martini” for $10 with Skyy vodka, X-Rated Fusion Liqueur (premium French vodka, rich blood oranges & Brazilian passion fruit), grapefruit juice and cranberry juice. It was lovely.

Though we did not have any room for dessert, their dessert menu runneth over with such offerings as vanilla-bean crème brûlée for $8 and mixed fresh berries with créme anglaise and chocolate almond tuile for $6.50. Perhaps next time. 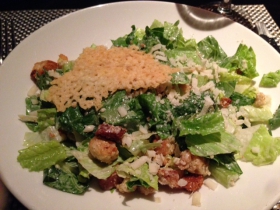 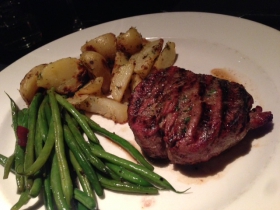 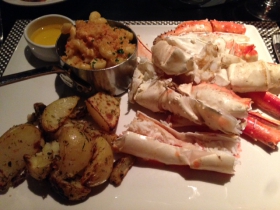 Preparation:
Freeze the fish fillets for 20 minutes so they firm up, then cut them each into two, thin wide fillets so that you have four (or have your fish monger do it for you so you have two per serving). Place the fillets in a large, shallow container and pour the dairy over them (I put them in a Ziploc bag with the dairy) – this deodorizes the fillets so they smell less “fishy.” Cover and chill for 30 minutes.

Mix the flour, spice mix, and salt in a paper bag. Remove the fillets from the milk and drain off the excess. Transfer to the flour mixture in the bag and shake it well to coat all sides of the fish with the mixture.

Heat 2 tablespoons of the oil in a large skillet over high heat until just smoking. Add the fillets and cook until golden brown, about 2 minutes per side.

Mix all ingredients together thoroughly. Store in an airtight container.