Wisconsin Is Now a Republican Oligopoly

The 2010 election gave Republicans control over all three branches of Wisconsin government: the governorship, the state senate, and the assembly. They took advantage of this control to redistrict legislative districts to give themselves a built-in advantage in all future elections. The recent election results offer a chance to measure the size of this advantage and its likely effect on the state.

For a party wishing to gain an electoral advantage through redistricting, the basic strategy is to pack a select number of districts with very high proportions of voters favoring the other party. This creates the opportunity for a larger number of districts with a majority of voters favoring the party doing the redistricting. In this article, I look at the effectiveness of this strategy in Wisconsin.

The approach I used was to treat the two gubernatorial candidates as proxies for generic Democratic and Republican legislative candidates and then adjust the totals so that each candidate won half the votes statewide. In November’s election, Mary Burke received 47.1 percent of the two-party vote statewide and Scott Walker 52.9 percent. Thus I added 2.9 percentage points to the Burke total in each legislative district and subtracted the same number of votes from the Walker total. I then totaled the number of districts each candidate would have won if the statewide vote had been tied.

An alternative approach sometimes taken is to add up the total votes for candidates from each party and compare the results. With the increasing number of districts in which one or the other party does not bother to field a candidate, such totals have become less meaningful; the party with no candidate receives no votes. Even when the party does field a candidate in a district that favors the other party, a candidate regarded as doomed finds it hard to mount an effective campaign. By contrast, every vote in a state-wide race is equally valuable in determining the outcome, whether cast in a competitive district or one in which one or the other party has a lock.

I then estimated the tipping point, the percentage of the statewide votes that would cause a majority of the Wisconsin House of Representatives, state senate, or assembly to flip from Republican to Democratic or back again. Here are some conclusions from this analysis.

I have dubbed this extra Republican advantage the “Democratic handicap.” In athletic terms, it would be as if, before posting the final score, the referees took 5 percent of the total points from one team and gave it to the opposing team. 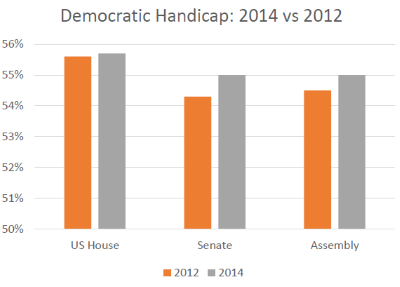 The Democratic handicap calculated from November’s election is similar to that calculated from the 2012 election between Barack Obama and Mitt Romney. In that election Obama would have needed to win over 54 percent of Wisconsin votes to win a majority of the Wisconsin senate and assembly districts.

2. This handicap is largely the result of deliberate gerrymandering

Recently, both in Wisconsin and nationally, there has been a rash of articles arguing that the Republican advantage is due largely to the concentration of Democratically-inclined votes in cities rather than a deliberate policy of gerrymandering districts. Fortuitously, the 2008 presidential election allows us to test this argument. 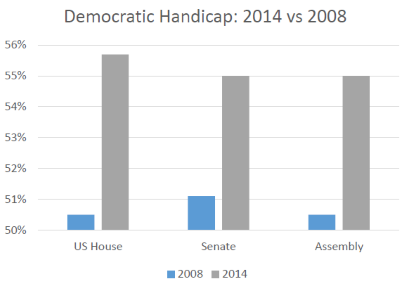 Following the 2000 census, neither party controlled all three branches of government. After attempts to agree on redistricting proved futile, the job was turned over to the courts. The 2008 election was run with court-drawn districts.

As can be seen from the graph on the right, under the court-drawn districts Republicans did start with an advantage, but one much lower than today’s. Rather than today’s ten-point handicap, Democrats started behind by only a point or two. The built-in handicap was too small to keep control of the legislature from switching back and forth during the last decade. That will be very different now and for the foreseeable future.

Introductory economics texts start by describing perfect competition with many players. The resulting competition quickly eliminates opportunities for permanent advantage. If the class has time, it then turns to real-world economic structures. These include oligopolies where there are only a few players. One strategy oligopolists might be tempted to use is to divide up the market to reduce competition. Imagine that Walmart and Target were the only retailers and each avoided territories where the other was strong. 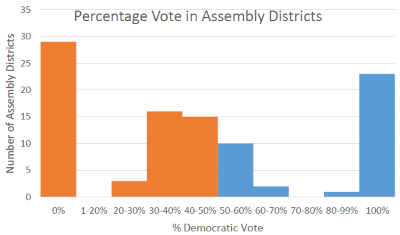 Politically, Wisconsin looks increasingly like an oligopolistic market. The parties themselves seem to have increasingly learned the futility of contesting most districts. In November’s election, fewer than half of Wisconsin voters lived in assembly districts where they were given a choice between candidates from both parties. Two-thirds (64 percent) of Democrats in the incoming Assembly will have won election with no Republican opponent. Similarly, almost half (46 percent) of Republicans taking office next month were not challenged by a Democrat. In other words, over half the members of the new Wisconsin Assembly had no opponent from the other party. 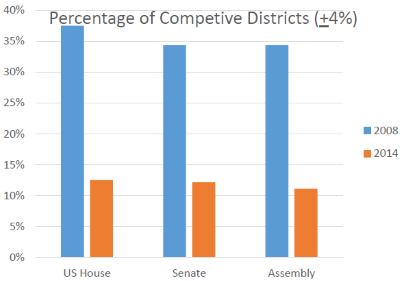 Competitive districts are increasingly rare. If the 2008 election results are adjusted so that the state-wide vote was evenly split between the two parties, in over a third of US House and state Senate and Assembly districts the winner would have received 54 percent or less of the vote. Such close margins would have made these seats very tempting for the other party. With enough resources, the right candidate, and a bit of luck, such seats might be flipped. In the most recent election, however, the proportion of such competitive districts dropped from one in three to around one in eight.

To those who believe that society benefits when people engage only with these who agree with them, this may be regarded as good news. For those of us who believe that exposure to new and unfamiliar ideas—including the discipline of defending one’s own ideas from  those who disagree—is a valuable experience, this seems limiting.

4. The Democrats’ problem goes beyond candidates

After every disappointing election result, there is a rash of post-mortems. One very predictable route is to blame the candidate. Blaming the candidate eliminates any need to rethink a party’s strategy. 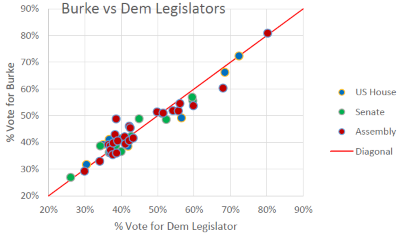 As the chart shows, Burke performed about as well in US House and Wisconsin Senate and Assembly races as did the Democratic candidates for those seats. The vertical axis shows the percentage of votes Burke received in the district. The horizontal axis shows the vote percentage the Democratic candidate for the district received. Only districts where both parties fielded candidates are shown. Districts that fall on the diagonal line are ones where both Burke and the district candidate got the same percentage of the vote. In districts above the line Burke got a higher percentage; in those below her percentage was lower. Sometimes she did a bit better and sometimes a bit worse, but overall her performance was about what would be expected from a Democratic candidate in Wisconsin in 2014. Unlike Barack Obama in 2012, she did not run ahead of her party, but she also did not run behind it. 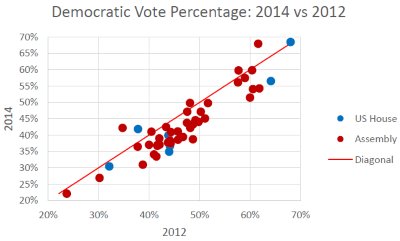 The next graph compares the Democratic percentage for state senate and assembly candidates in 2012 and 2014. Unsurprisingly, the overall percentage voting for Democrats was lower than in 2012.

5. Why the election results are bad news for nearly everyone

In the long run, this situation is bad for Democrats, for Republicans, for Wisconsin and for the region:

An alternative districting scheme that emphasizes competitive districts could help create incentives to find common ground. Parts of four Congressional districts include portions of the Milwaukee metropolitan area: First (Paul Ryan), Fourth (Gwen Moore), Fifth (James Sensenbrenner), and Sixth (Glenn Grothman). Combining either the first three or the last three leads to a competitive “super-district,” which could then be subdivided into three competitive districts, incorporating parts of Milwaukee and its suburbs. It seems likely that successful candidates for these new seats would be people who offer a vision that benefits the whole area.

13 thoughts on “Data Wonk: Wisconsin Is Now a Republican Oligopoly”