Brass Rooster has opened a second hat shop, this one for the ladies. 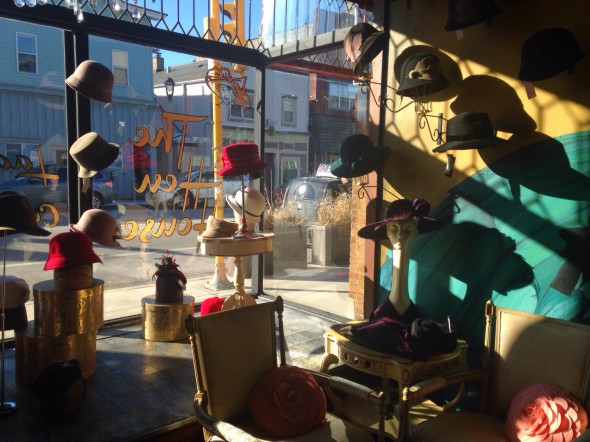 There was a time when there were three hat makers located in downtown Milwaukee. Then John F. Kennedy was elected. “He threw his fedora in the car and walked without a hat because the ladies liked his curly hair,” notes master hat maker Kate McLaughlin. The result was many more men going without hats. Along with the decline of people sitting on porches and instead sitting inside watching TV, mens hats gradually became less and less popular. The last hat maker in Milwaukee, Donges on Third and State streets, with its slogan “Gloves to burn and some that don’t,” went out of business more than a decade ago.

But three years ago, the Brass Rooster, co-owned by Kate and John McLaughlin opened what has become Bay View’s only men’s hat maker and one of a dwindling number in the entire country. The shop has made a lot of hats and has become so successful it’s now added a ladies hat shop, The Hen House

Just last month, Brass Rooster moved to new headquarters at 2252 S Kinnickinnic Ave, a few blocks north of their old location, while also opening The Hen House, just next door, at 2250 S. Kinnickinnic. Both shops are in the building long occupied by and sold by the Boulevard Theatre in June. That’s rather appropriate, given that Kate spent ten years working in the costume design and hat making department of The Milwaukee Repertory Theater.

When I visited, both of the new shops were bustling with activity and customers, but I had the chance to sit down with both John and Kate and hear a little more about their truly rare business.

One day, out of the blue the couple decided Kate would leave the Rep and they would go into business for themselves. “I didn’t even have to think,” John says. “I just said, ‘okay.’ When the space became available for us, we had to take it.”

As for the latest venture, “We have been told for years now that we needed a ladies selection to compliment to the shop, and this space gave us the opportunity to do so,” John notes. It also takes advantage of Kate’s skills, as she is a master milliner who can create hats for both women and men.

There are only about 30 men’s dress hat makers left in the country and ten percent of them are at actually at the Brass Rooster: Kate, John and their employee Reggie Abdin are all men’s hat makers. That makes The Brass Rooster rare indeed. But even ladies hat makers are not that common.

Hat making is quite labor intensive. Kate says it takes about 30 steps of work and three days to make a hat, which includes several breaks for curing time. But the result can be a one-of-a-kind hat.

Kate is extremely excited about The Hen House and all it has to offer. While The Brass Rooster boasts deep reds, refurbished barber chairs, dark wood, leathers, and opulence, The Hen House is light and airy, with its glittered floors and feminine elegance. A mural of Madame Pompadour, known for her luxurious vintage style, was hand painted by local scenic artist Shannon Mann. “Madame Pompadour has always been a huge inspiration to me and my work,” Kate gushes as she poses next to the mural.

She hopes that by the beginning of next year, she will be able to begin hosting parties and classes that will allow customers to come into the shop and try their own hand at creating a custom piece. “It would be wonderful to have groups of ladies come in and crack open a bottle of wine and just create.” She’s also hoping to host parties centered around little girls who would like to come in and create their very own hats.

You may feel as though you are walking into another world upon entering either shop. Both have an old world, traditional feel with all the modern conveniences. The manufacturing part of the shop is front and center for the customer’s viewing pleasure.  The couple was able to purchase a large amount of equipment from Clarence Reynolds, once dubbed “The Last Hatter.” He was the Master Hatter at the famous, Henry the Hatter shop in Detroit.  The vintage machinery allows the three master hatters here to do custom fittings, full cleanings, repairs and has even allows them to make their own line of hats; The Vintage 125 Collection, a collection of just 125 hats made from hat bodies that were all manufactured from 1950-53 and also made with vintage ribbon.

Every hat in the store is made with high quality materials and hand stitched, with real embellishments and stones. “You won’t find any glued-on plastic pieces here,” Kate assures me.

The products, in short, are unique. And the atmosphere is equally unusual. Both are good reasons to check the shops out. 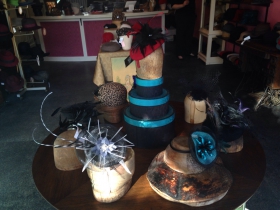 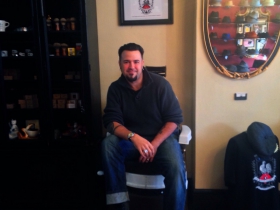 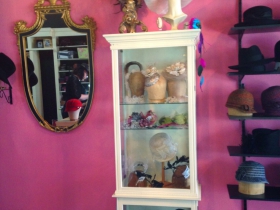