Death of a Poet

Frank O’Hara was the leading member of the “New York School” of poets, who borrowed that title from the New York School of abstract expressionist artists, and there was a good deal of cross pollination between the two. O’Hara exemplified those interconnections since he was both a poet and art critic, who was employed as a curator at New York’s Museum of Modern Art. Those in the New York School, which also connected to the music world, drew their inspiration from jazz (O’Hara wrote a famous poem about the death of Billie Holiday), surrealism, abstract expressionism and various avant garde movements. O’Hara himself died early, at age 40, and since then, “the depth and richness of his achievements as a poet and art critic have been recognized by an international audience,” as the Poetry Foundation has observed.

Artist Alfred Leslie was a friend and collaborator of O’Hara, and after the latter’s death, Leslie created The Killing Cycle which is a series of very large oil paintings, constructed narratives that synthesize fact and fiction to describe the beach scene car crash that ended O’Hara’s life.

Leslie, too, is a major figure. As a 2004 story in the New York Times noted, he was at “the red-hot center of a postwar art movement… from the heady days of the Abstract Expressionists at the Cedar Bar to the early realists, from the creation of silk-screened cardboard boxes that prefigured Warhol’s Brillo breakthrough to the cutting edge of underground film.”

Yet he was something of a contradiction: His abstract paintings of the 50’s “earned him a reputation as de Kooning‘s heir.” Yet in the 1960s “he performed an artistic about-face: when the Whitney had its show “22 Realists” in 1970, Mr. Leslie was among them, along with Chuck Close and Philip Pearlstein.

The works in The Killing Cycle are more in the realistic mode yet there is at times an abstract quality to them.

The exhibition includes these oil paintings plus some preparatory drawings by Leslie and this is the first time in 20 years the show has been exhibited. In addition, it features a screening of the film, The Last Clean Shirt, a collaboration between Leslie and O’Hara. 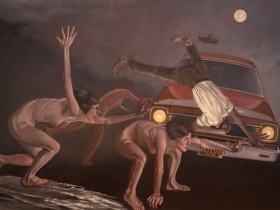 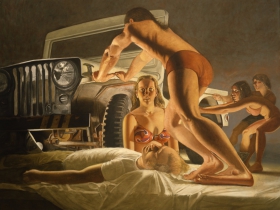 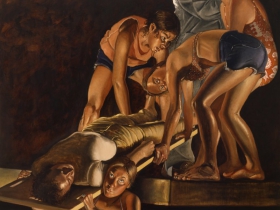 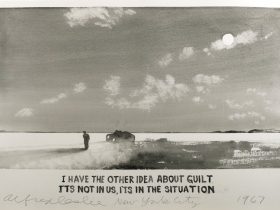 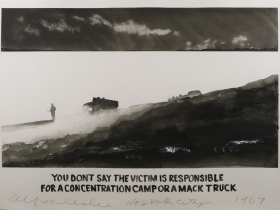 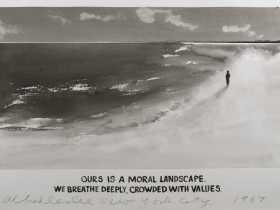 0 thoughts on “Visual Art: Death of a Poet”