The deals here are many, including, of course, the city’s shortest happy hour.

As soon as I left my day job yesterday I drove straight to Brady Street to catch the end of the USA-Ireland men’s friendly soccer match at Nomad World Pub. There definitely weren’t as many futbol fans in the house as there were during the World Cup this summer, and the controversial “Nomad Favela” is long gone, but there were enough fans to warrant opening the bar a bit early. With some time before the “World’s Shortest Happy Hour” (4:00pm-4:18pm) I ordered a regular priced ($5) Magners Irish Cider, which coincided with Ireland scoring three goals.

By the time 4 o’clock arrived I was able to forget about the poor performance by team USA with a luscious pint of Atwater Vanilla Java Porter on draft for $1. Nomad is not only the undisputed home of futbol in Milwaukee (though The Highbury Pub will contest that claim), but also of the shortest happy hour. Last week I visited The Hotel Foster, home of the second shortest, so it only made sense to try the original this week.

The crowd picked up as happy hour approached and I noticed some patrons putting in pre-orders with Amanda the bartender during the countdown. A popular (and thrifty) item at the Nomad is the Prix Fix, which includes a shot of Jameson, a short can of PBR and a “garnish” (actually a loose cigarette, it’s just that the ATF came in and said they couldn’t advertise it as such). The Prix Fix usually runs (an affordable) $5 but during happy hour it’s only $2. All drinks $6 and under are $1, with the unwritten rule that double tall cocktails are $2.

Nomad is a refined shot and beer bar, with an extensive tap, bottle and can list that reflects their global vibe. With 24 beers on tap and about 75 bottles and cans, there’s a brew for everyone. They have all the standard liquors for your classic cocktail needs. Happy hour runs Monday through Friday, as well during halftime of the first Saturday and Sunday English Premier League matches. During morning EPL matches they also have a free bacon buffet with toast, $3.50 Carlsberg pints, and $5 Bloody Marys.

Yesterday’s happy hour clientele was made up of a few futbol fans, a number of regulars, a couple newbies, an ex-regular who was stopping in for the first time in years, an older Englishman at the end of the bar (a regular), myself and a local celebrity, Marcus Doucette, a Radio Milwaukee DJ and host of the Nomad’s best known weekly event, Sound Travels on Sunday nights. Marcus was living the ethos of the bar set out by owner Mike Eitel, who sees his establishment as the first stop travelers make when they get into town. Marcus may not have been fresh off the plane, but he was very recently in Costa Rica. The specials during Sound Travels include $2 PBR, $3 Lakefront taps and $5 double tall Rehorst Vodka drinks.

Nomad will be celebrating its 20th Anniversary in March and who knows, maybe they’ll increase the happy hour by a couple minutes for the occasion. It has been a part of the bar since they opened in 1995, but it was only 15 minutes back then. Futbol fans, if you’re able to skip out of work early next week you can catch the most surprising English Premier League club, Southampton, take on USA’s number two goalkeeper (Brad Guzan) in a match-up with Aston Villa at 2pm on Monday the 24th. The next day there’s a big Champions League match between Manchester City and Bayern Munich at 1:45pm. Check the Nomad’s website for the futbol schedule, and don’t hesitate to request a match (as long as it’s not a hard to find the team or league, like my beloved Hibernian F.C. who were relegated this season, alas, to the Scottish second tier).

Coincidentally, the Halloween night thread continues in this column. As I was closing out my tab with Amanda yesterday I noticed a pair of guys at the ATM next to the bar. One of them was having trouble with his card. It was the doorman from Yield Bar. I offered to buy him a drink, as I promised on Halloween night, but he took a rain check and walked out. Oh well, can’t win them all. 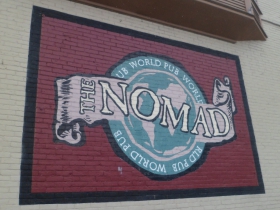 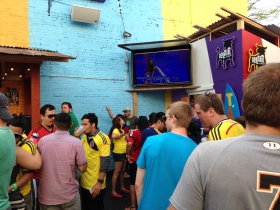 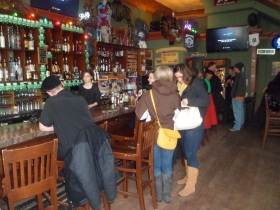 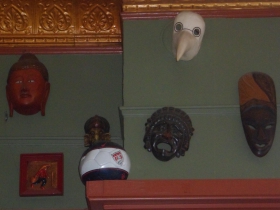 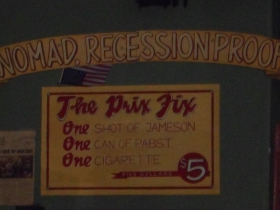 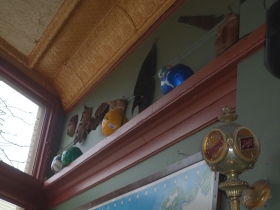