By Kelly Meyerhofer, Milwaukee Neighborhood News Service - Nov 18th, 2014 10:21 am
Get a daily rundown of the top stories on Urban Milwaukee 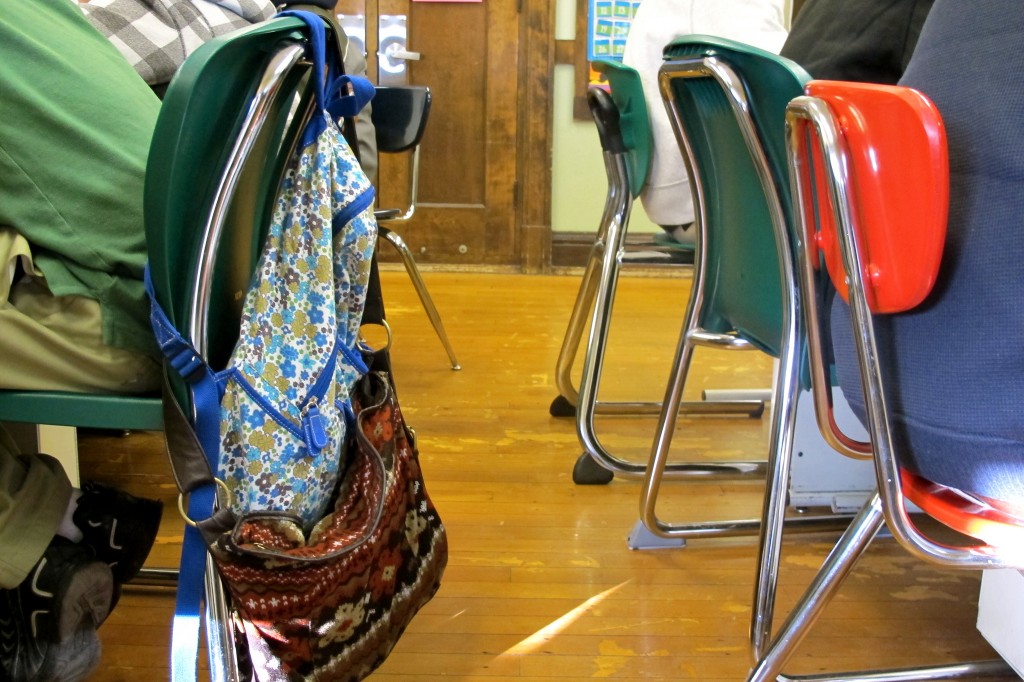 Though the most recent data available shows an increase in the number of MPS students in their seats at school, truancy has plagued the district for more than a decade. (Photo by Tessa Fox)

More than 70 percent of Milwaukee Public School high school students were considered truant in the 2012-2013 school year, the most recent data available, according to the state Department of Public Instruction.

And the truancy rate has spiraled upward in the past 16 years, as far back as DPI data goes. While the rate dropped 14 percent between 2011-2012 and 2012-2013, the overall trend has been in the other direction.

Despite a relatively successful intervention program called TABS (Truancy Abatement and Burglary Suppression) that began in 1993, MPS high school truancy fluctuated between 45 and 60 percent in the late 1990s. It ballooned in the 2011-2012 school year to 81 percent.

Wisconsin law defines a habitual truant as “a student who is absent from school without an acceptable excuse for part or all of five or more days on which school is held during a semester.”

MPS social work coordinator Dena Radtke explained that for high schools, which operate on a period system, a student is truant if he or she misses 40 percent or more of the scheduled minutes in a day without an approved excuse.

District policy requires parents to receive a phone call home for every unexcused absence. But these types of calls have been proven to be ineffective, said Ken Seeley, founder of the National Center for School Engagement, one of the nation’s leading organizations on school attendance. If the student is staying home from school, he can delete the message before his parents even realize it is a problem. 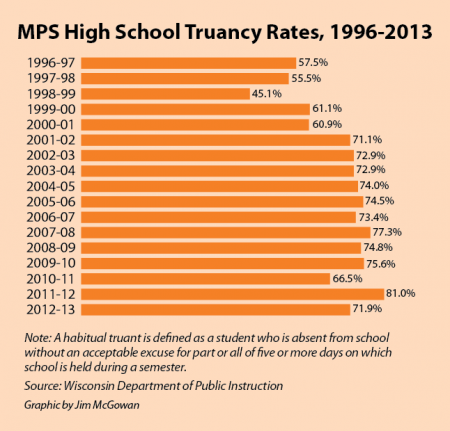 MPS spokesman Tony Tagliavia pointed out that parents can choose to provide a cell phone number to prevent this from happening. He was unable to say what percentage of parents choose this option, but pointed out that teachers also can send a notification in the mail or request a home visit from a social worker if they are concerned about a student’s truancy.

Aside from the mandatory phone call for every unexcused absence, there are other steps MPS must take when children reach certain thresholds.

State statute requires districts to label students habitual truants after five unexcused absences. But according to MPS policy, parents or guardians are not notified by an MPS social worker until the student has accumulated eight unexcused absences.

Seeley critiqued this approach. Students are slapped with a truant label before any meaningful intervention by the district, he said.

Elise Dizon-Ross, an education policy expert, also said this is not the best way to address attendance. Research has shown that children who miss more than 10 percent of the school year, or 18 of the 180-day MPS school year, are far more likely to struggle academically and eventually drop out, said Dizon-Ross.

This means that students who miss nine days of a 90-day semester have entered the danger zone.

A student with eight unexcused absences, the threshold that triggers action by MPS, may already be at risk when excused absences are taken into account.

“This means that students would already have fallen significantly behind before the district steps in to shift their trajectory,” she said. “To not take action until a student has missed several more days would be effectively ignoring this early warning sign.”

MPS Board president Michael Bonds declined to speak to NNS about the rationale behind the district’s truancy policy.

Socioeconomic factors play a large part in attendance. The percentage of people living below the poverty line in Milwaukee is more than double Wisconsin’s as a whole, a study by the Wisconsin Poverty Project showed. This provides some insight into why Milwaukee’s truancy rate is so much higher than the state’s average, which hovers around 13 percent for high schools. 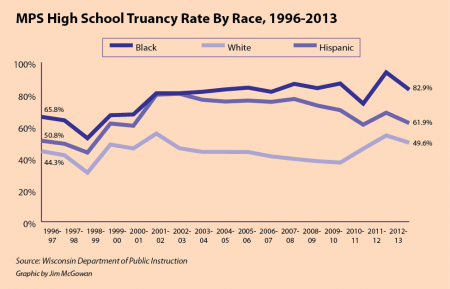 No metropolitan area has a higher incidence of black poverty than Milwaukee, according to the 2010 census, which may explain a truancy rate for African-American students that is more than double that of their white counterparts. In the 2012-2013 school year, 83 percent of MPS’s African-African high school students were considered habitual truants.

Attacking the root causes of truancy is a complex task, given the multitude of underlying issues.

“Sometimes (students) don’t feel welcome at school, sometimes the gangs make them feel unsafe, sometimes their parents were out drinking or partying all night,” said Beth King, a truancy program coordinator on the city’s South Side. “Some are homeless or pregnant or don’t have transportation to school. There’s so many reasons and it’s all on an individual basis so just one program won’t solve all of our problems.”

Shane Pecoraro, a Milwaukee Police Department officer who works to get truants back to school, cited the high mobility of the city’s population, with students constantly shuttling in and out of different schools. This is more prominent among high school students, which may help explain the uptick in truancy rates from elementary and middle school to high school.

Radtke mentioned the high number of single-parent households in the city, putting pressure on many high school students to provide child care to their younger siblings while the single parent works to make ends meet.

“If there was one answer for why most kids do not go to school, I’d be out of a job by now,” King’s voice trailed off. “But I’ve been here for 15 years…”

2 thoughts on “72% of MPS High School Students Are Truants”