By Kelly Meyerhofer, Milwaukee Neighborhood News Service - Nov 18th, 2014 10:21 am
Get a daily rundown of the top stories on Urban Milwaukee

King leads one of the city’s two TABS centers, which are located on the north and south sides of the city at Boys and Girls Clubs locations.

The comprehensive support program allows for MPD, MPS and the Boys and Girls Clubs of Greater Milwaukee to intervene with students who are truant, deterring them from involvement in the criminal justice system.

Only 16 percent of the youth processed at a center are picked up a second time, said King, who attributes the program’s success to its collaborative approach. 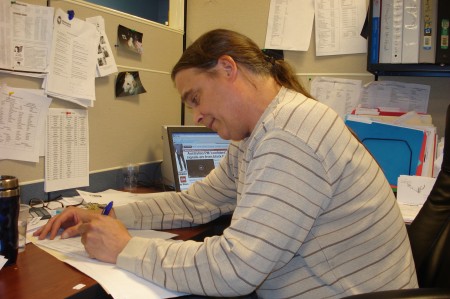 “Unlike other programs, we have the clout,” she explained. “We can say ‘you’re going to have to go to court.’ Other programs can’t say that because they don’t have the connection with the police officers or municipal courts.”

Officers such as Pecoraro comb the streets for truants and shuttle them to a center where an MPS social worker evaluates their needs. After conferring with the student’s parent or guardian, the social worker develops an action plan that holds both the student and the adult accountable.

In the first three months of 2014, MPD officers picked up more than 1,500 students at almost 740 stops, according to data provided by Milwaukee Police Lieutenant Mark Stanmeyer.

King estimates her site averages 20 to 30 interviews on any given school day.  Between the two centers, the TABS program assists about 5,000 students each school year.

Not all of these students are picked up off the streets. After 25 unexcused absences, MPS generates a mandatory TABS referral that King said amounts to about 2,000 referrals each year.

Only students ages 12 and above can be cited and fined $84 for truancy, said Milwaukee Deputy District Attorney Lovell Johnson. Parents of younger students are cited for contributing to truancy and must pay a $171 fine or fight the charge in court. But Johnson said prosecution is a last resort. The cases can be easily dismissed if there is a visible improvement in attendance.

“Few things with law enforcement actually work to lower truancy rates,” said Alan Borsuk, a public policy fellow at Marquette Law School. “What does work is engaging the kids with what they’re learning.”

Dan Herro, a teacher at Washington High School of Information Technology, 2525 N. Sherman Blvd., agrees with Borsuk’s observation. He said that whenever field trips or guest speakers are scheduled, attendance numbers are much better.

“It’s a matter of having an engaging curriculum,” Herro said. “That’s what’s going to keep them in the classroom.”

At least that’s what the Check and Connect program has found. Started in the Minneapolis public schools in 1990, the federally funded program initially aimed to help special education students.

After realizing how successful the program was with these students, Minneapolis Public Schools extended Check and Connect to all students in grades K-12. Using their own set of standards, individual schools identify at-risk students and pair them with a mentor, who “checks” the students weekly by monitoring attendance and grades, but also “connects” with the student and parents by making a minimum two-year commitment.

Mentors can be full-time employees hired by the district to juggle 40 to 50 students or a teacher within the school who agrees to meet with a couple of students on the side.

Different variations of the program spread throughout the nation after studies found students displayed increased levels of engagement, especially attendance, after two years in the program.

Said Check and Connect project coordinator Sharon Mule, “Sometimes all kids need is to know there’s someone rooting for them.”

2 thoughts on “72% of MPS High School Students Are Truants”