Every branch of the service was represented, along with politicians, ROTC students, debutantes, Hmong police officers and military canines. 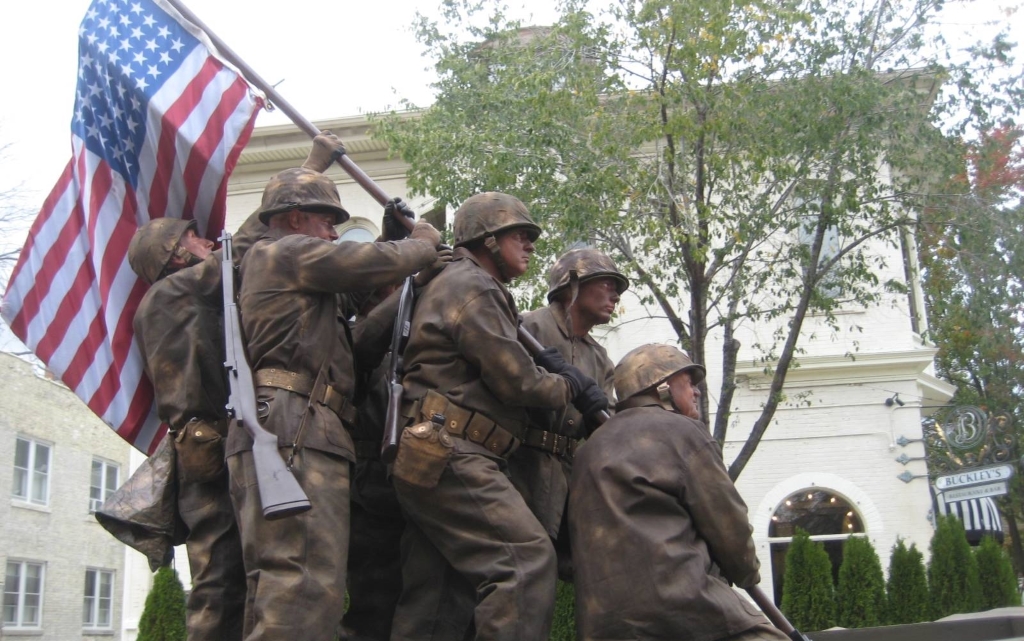 The parade kicked off at 11 a.m. behind a fleet of Harley-Davidson motorcycles. The Grand Marshals of the commemoration were military chaplains, who rode the route in a trolley. They included Father Robert Barry, an Air National Guard chaplain of the Gulf & Iraq Wars, who was featured on the cover of the event’s program walking through a military cemetery in a photograph captioned, “All Priests Serve God. Some Also Serve Their Country.”

The parade headed east from its starting point at N. 6th St. and Wisconsin Ave., traveling past a reviewing stand hosted by Parade Announcer David Drent, the Executive Director of the War Memorial Center, which the marchers passed on their way to a Memorial Service at the lakefront Veterans Park at the parade’s terminus.

Among the honorees were World War II veterans, and those who sponsor the Honor Flights to the nation’s capital.

Every branch of the service was represented, sometimes in multiple units, and from wars ranging from the Revolution to wherever we are at right now. The parade also included fleets of old military vehicles, quite a number of old Model A Fords, vintage firetrucks, ambulances and even an old Police patrol wagon with Ald. Bob Donovan hanging on to the rear greeting the crowd, while his colleague Joe Dudzik waved from the comfort of a closed vehicle..

Other dignitaries included County Executive Chris Abele and Mayor Tom Barrett. A vehicle from the Sheriff’s Department was in the event, as was a horse, but there was no Sheriff atop it.

Other units included a bus from Dry Hootch, a fabulous marching band from the Oostburg High School, and numerous contingents from St. John’s Northwestern Military Academy, which has probably trained more future international leaders than any other Wisconsin prep school. Last year it had over 120 cadets from 12 foreign countries, and here they were, marching in honor of United States veterans.

An improvised vehicle tricked out as a World War I French troop carrier locomotive hosted members of La Societe des Quarante Hommes et Huit Cheveaux — The Society of Forty Men and Eight Horses (colloquially the Forty and Eight) — an elite veteran’s group named after the capacity of the original trains.

Other contingents included family members of slain soldiers, some holding placards with photos of their deceased loved ones, bearing the dates of their loss. Some of those dates included the year 2014.

A group of Marine veterans composed a tableaux vivant of the Iwo Jima memorial. The old leathernecks, painted a weathered bronze, were as stoic and unmovable as the sculpture they commemorated.

The Dogs of War were let slip into the event, with over a dozen military canines marching down the street in as orderly a fashion as their human counterparts.

ROTC students, Young Marines, Daley’s Debutantes and youths from the Hmong American Peace Academy in their brilliant costumes added sparkle to the proceedings, while other youths handed out free American flags and tossed candy into the crowds.

The order of the parade also included a number of members of the West Point Parents Association. There were scores of attendees from the area’s American Legion and Veterans of Foreign Wars chapters, while a very strong contingent from the Veterans Administration Hospital also made an appearance. Unrepresented were the Gay Veterans, although there were surely dozens in the parade, and the Vietnam Veterans Against the War. Throughout the event, spectators cheered on the participants, while those marching in the parade in turn thanked the audience for attending.

Special honors were granted to the memory of Naomi Horwitz, who, in 1942, was one of the first volunteers in the Women’s Auxiliary Army Corps, serving in the United States Army Reserves until her retirement in 1976. Horwitz died on October 30th, 2014 at the age of 98.

The lead sponsor of this All-American event was, somewhat incongruously, Trans Canada Corporation of Calgary, Alberta.

The day’s activities were organized by Honor Our Military, Inc., a non-profit, tax-exempt volunteer organization. 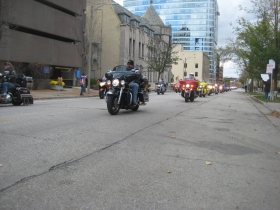 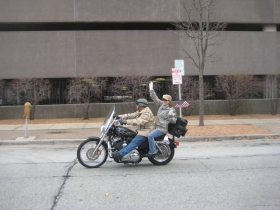 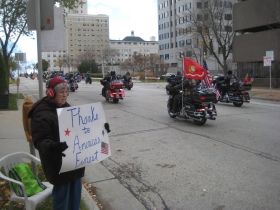 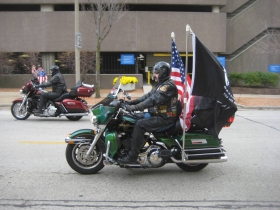 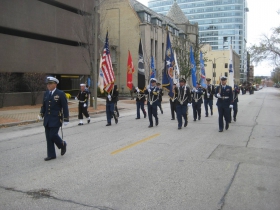 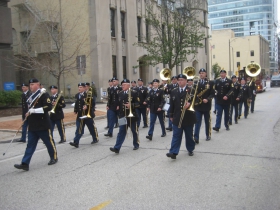