Shoreline restoration, bicycle trails and other changes are happening along the river on the Lower East Side. Our photos track the progress in the last year. 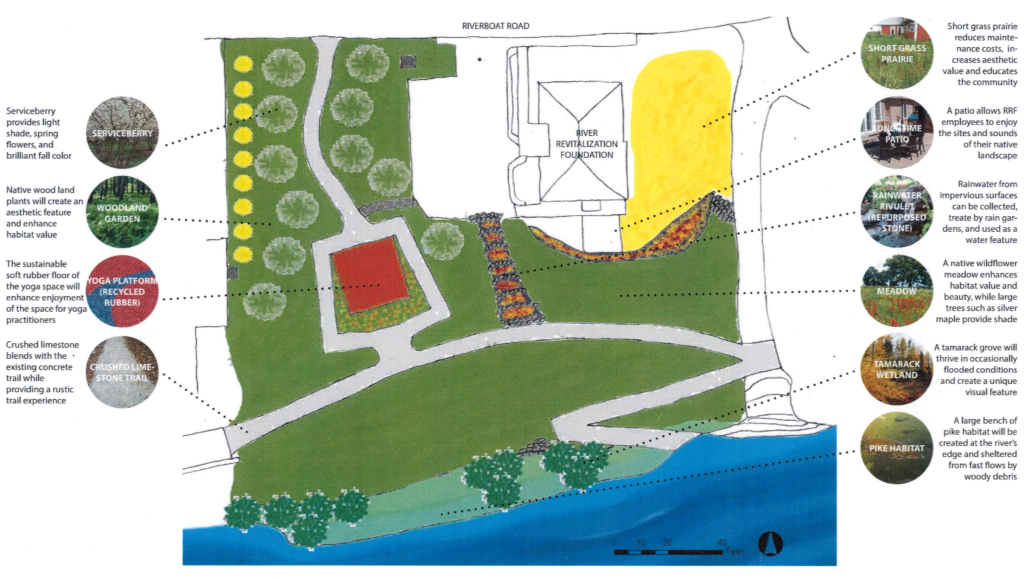 For several years I have enjoyed a view of the Milwaukee River from its eastern shore and have photographed the changes underway at what used to be Melanec’s Wheelhouse across the river on the western shore, which is actually due north at this part of the river. After what seemed to be a slow start, dramatic changes are underway at the area just downstream from the former dam.

This is an intersection of urban development and natural habitat rarely found in any metropolitan area. This is a world class salmon and trout stream right in the middle of one of the most densely populated areas of the state.

Just this week, large boulders have been dumped into the river as part of a Fish Shoal (photos of the construction) project in a Wisconsin DNR project. Nearby shoreline restoration is underway and new access has been created for the Greenway Gateway, a project of the River Revitalization Foundation, which has moved its headquarters to a rehabbed 1960s single family residence on the site at 2134 N. Riverboat Road. (The tan brick building can be seen in the photos; it was preserved and reused for this project, just one of its quality, eco-friendly elements.)

Among the many things going on there is grading that will connect the bicycle path on the west side of the river that runs north to Gordon Park with the lengthy downtown section that terminates just south of the Humboldt Bridge. Earth moving equipment has greatly altered the bluff at the site, and the bike path, under the bridge and upstream, is taking place along with much other site development.

This was once, and for many generations, just a pile of junk and boulders on the river. I despaired of it ever being cleaned up. For years — well into the present century — the site was so overgrown and desolate that it was a frequently used dump for old tires, construction debris and other urban garbage.

The location is one of the most historic in the entire settlement of Milwaukee. The dam, or what remains of it, was the first public works project in the city, begun in 1834. It was intended to provide water power downstream, at first primarily to operate a lumber mill on the site. The location is also a filled-in canal that never made it more than a mile to its ultimate destination, the Rock River, before it was filled in in the 1880s. The water power was replaced by steam and then electricity, and the canal that never was, was superseded by railroads.

The work being done now is of considerable scale, and makes use of massive blocks of limestone, carefully laid. The landscape to follow will be of native plants, and the whole place bodes well to become a most attractive destination during all seasons. We’ll see how far it gets this autumn, and we’ll keep snapping pictures all the way up to its opening day.

Tanya Beuter, Land Manager of the River Revitalization Foundation, gives us some background on the projects now underway at the river’s edge, while even more is happening on the high ground above:

“There are actually two projects going on simultaneously on our project. We have a Shoreline Restoration project which was funded by Sustain Our Great Lakes (SOGL) and a project to enhance a fish shoal which is managed by the DNR and funded by Fund for Lake Michigan. I have attached the final design for our shoreline restoration project so you can get an idea of how it will all look in the end. More specifics are below: 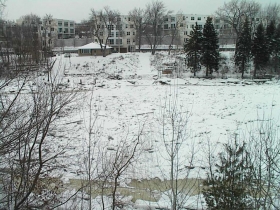 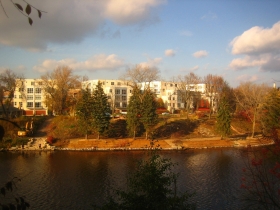 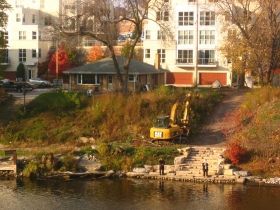 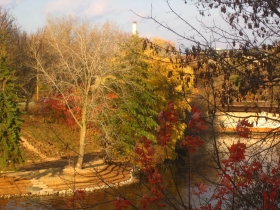 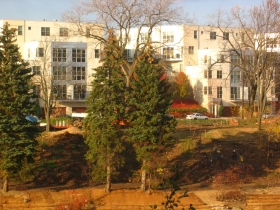 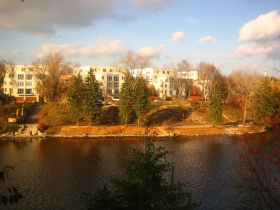