Harp and Shamrock Is a Survivor

The 1885 building on 21st and Wells is sagging, but venerable old bar attracts “Jeopardy!” and trivia lovers. 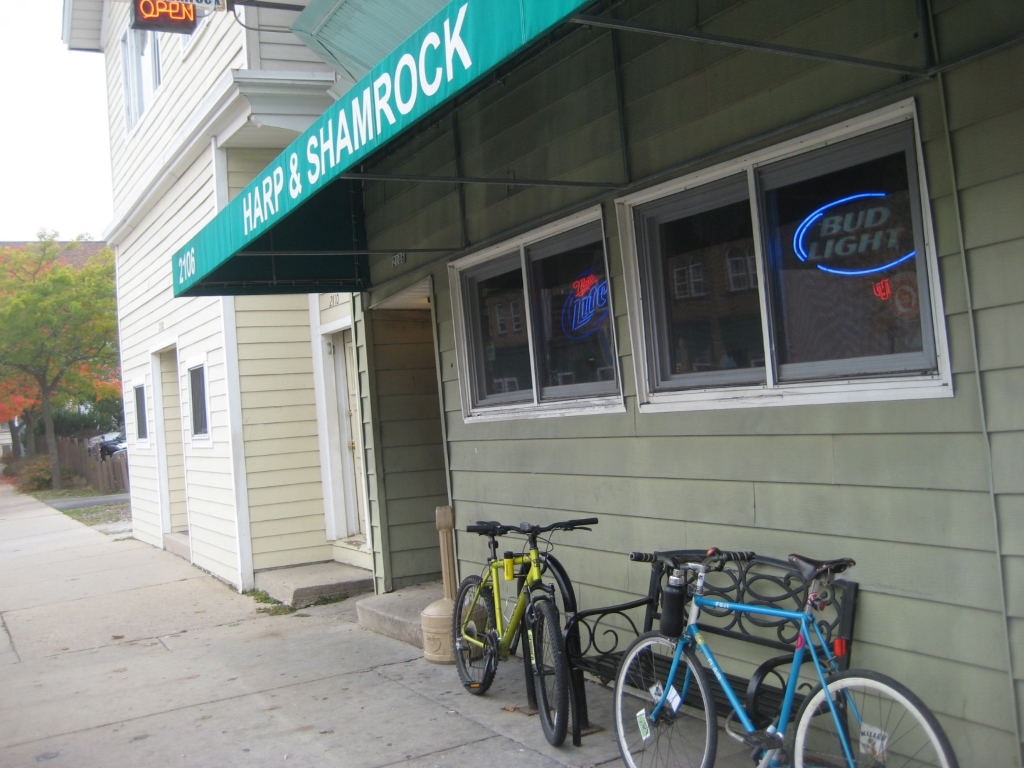 Early Milwaukee was the domain of Byron Kilbourn on the west side of the Milwaukee River as it spread its boundaries in the late 19th century. The frame structure that houses the Harp and Shamrock Tavern at 2106 W. Wells St. was already five years old on April 3, 1890, when electric streetcars replaced the horse-powered cars that had been in use since the 1860s on the Wells-Wisconsin line. It was the first line to be electrified — a sign of the western expansion of the growing metropolis.

The streetcar whisked residents to new subdivisions on the west side of town and on to Wauwatosa, and some rather ambitious buildings went up in the area, providing a framework for the skeleton of a big city. Humble places like this one remain to this day, awaiting a redevelopment that never came. No portion of Milwaukee more resembles Chicago at the street level than the gritty intersection of N. 27th St. and W. Wisconsin Ave., nearby.

Many large apartment buildings were constructed here to house the workers in the Menomonee Valley below, as well as those employed in the numerous hospitals of the area. These giant employment engines are now mostly gone, while much worker housing and social infrastructure remain.

With no hospital and industrial workers to fill the units, many of the homes and businesses of the area suffered, and the west end of the Marquette campus, although stabilized, has yet to become vibrant. It is our loss, for there are some enduring institutions and infrastructure here.

Since 1961, this bar has operated as the Harp and Shamrock, through the vicissitudes of time and through several changes of ownership — and through substantial demographic changes that hit the neighborhood like a punch to the gut.

At that time, the early ‘60s, under the ownership of James Hegarty, whose last name the city spelled in various ways, the building settled into its current routine, while continuing to settle somewhat uncomfortably into its curious foundation. It did not help that entrances had been moved in the building without being reinforced. Moisture from leaking plumbing worked its harm over the decades. To this day, there are pronounced ups and downs and backs and forths to the tavern’s walls and floors. This is no place to expect a carpenter’s square to run true.

Back in 1959, when Hegarty bought the place, he was cited by the city for installing a gas boiler without a permit. The gas system replaced what must have been an ancient coal-fired stoker and furnace. The toilet rooms in the place date as well to 1961, the same year a Pabst sign was erected on the front of the building. Hamm’s replaced Pabst in 1965, while the Blue Ribbon brand was back with a new sign in 1970, only to be replaced in 1971 by an Old Style sign under new owner, the late Bernie Conway (1930-2000) who also controlled what is now Conway’s Smokin’ Bar and Grill, right across the street at 2127 W. Wells St. Conway’s is still very much in business and owned by a descendant.

Hegarty had meanwhile decamped to an eponymous tavern at 1120 W. Wells St., where he died in 1981. That tavern, now demolished, survived until 2010. 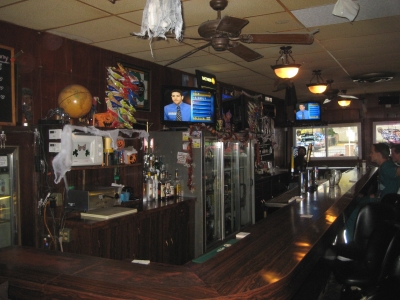 The bar at the Harp and Shamrock. Photo by Michael Horne.

In 1973 the floor at the Harp and Shamrock was repaired — or rather an attempt was made to repair the floor. The $200 spent on the job was not apparently enough. In 1976 a Schlitz sign was installed on the building, and a raised platform in the rear was removed, the 12-foot ceiling was lowered to 9’ 6’’, (where it remains) and the walls were panelled with a composite wood product quite popular at the time. This was pretty much the last time anything was done to the place.

In 1992 Debbie Jean Thatcher applied for a license for the bar; she currently owns Conway’s across the street.

Structural problems have plagued this building apparently since it was built. In 1994 the owners spent $10,000 for demolition to expose structural problems and to stabilize the building. “Replace all rotted members,” the inspector wrote.

The assessor included a dire note in the building’s file: “Major fdn. problems. Walls shifted and floors sagging in middle to to sagging wood shifting of floor. 2nd flr. is worse, leaving res. units unrentable. Chimney on subject was touching adj. bldg. to west….Acc to tenant in tavern owner cannot afford to fix due to costs. Bldg. probably should have Raze / Rehab order. Costs to cure problem are not economically feasible due to low rents in area.” [The apartments remain unoccupied.]

By 1996 the tavern, its sagging floors, shifting walls and rotting members was leased by Alison R. McCreadie, a child of Scottish immigrants who still does a couple shifts at Conway’s and is the 6 a.m. bartender Tuesdays and Wednesdays at the Y-Not II Coffeetails bar. She operated The Harp and Shamrock until June 30, 2001.

Later that year Michael Duggan applied to run the tavern, which had been vacant for a number of months. An architect found what everybody knew — “the wood frame walls and floors of this bldg are very uneven.”

So was it a foundation failure?

Maybe not. The foundation, the architect noted, was “built by eye, and not with a string line or survey level,” techniques known to antiquity but forgotten by 1880’s saloon builders. So the building, while leaning, is on a sound foundation, for whatever consolation that might offer.

Today the place and building is owned and operated by Allen J. Richards and his wife Kristin A. Richards, who take care of the morning and ordering duties before turning the place over to the staff for the evening’s business. They paid $26,400 for the building in 2004. Today, the 3,900 square foot lot is valued at $7,900 [$2 / s.f.] and the 3,436 square foot building is valued at $97,200 for a total assessed valuation of $105,000. Taxes of $3,301.38 are paid in full. The bar, significantly, is located next door to a police substation. This is a safe neighborhood, despite appearances. The millennials will ensure its future.

The bar is a shrine to “Jeopardy!,” the game show broadcast weekdays at 6 p.m. Get the Final Jeopardy! question right, and you’ve just won yourself a free cocktail. Here is Milwaukee hospitality at its finest — freely poured, and for the benefit of an informed citizenry.

The bar has 17 stools arranged around its U-shaped periphery. Miller Lite and MGD are the sole draft beer choices. There is a worn wooden pattern to the Formica bar, and that 9 foot, 6 inch dropped ceiling bears traces of an earlier nicotine-stained era of smoking. There is a three door glass-fronted cooler in the center of the bar housing good beers in bottles, and another to its north at the end of the bar near the pizza oven. Food here includes a wide range of jerky items and beef sticks, including those from Mike’s Country Meats in Campbellsport, brought straight to the bar by the Mike’s folks every couple of weeks or so. One may also find the Kickass Teriyiaki Jerky product for sale here.

There is a birthday board above the bar listing the natal dates of regulars. October seems a prime month.

The carpet, to be sure, is vintage, in keeping with the general theme of things here. The pool table, which rests upon the tavern’s great central depression, is a bargain, if somewhat unlevel, at 50 cents a game.

For those short of cash, there is an ATM located beneath a vintage TYME machine neon sign. A photo booth jukebox is also on premises. Customers hang their pictures on the wall. 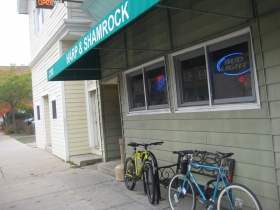 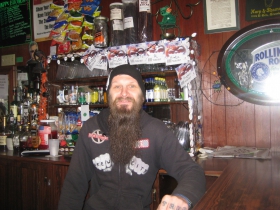 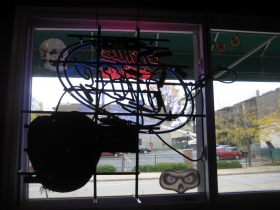 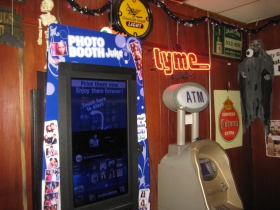 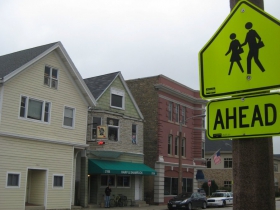 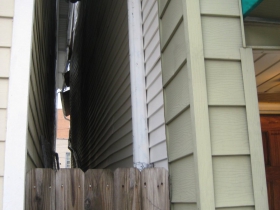 0 thoughts on “Taverns: Harp and Shamrock Is a Survivor”