From the Hyatt Polaris Room

My goal was to duplicate the 1896 view of Milwaukee in the famous lithograph. Not quite, but great views anyway.

About the view: The rotating, 360-panorama restaurant at the top of the Hyatt Regency Milwaukee, the downtown hotel, has been closed for five years now. The slow circle still works, but like many novelty rotating restaurants in America it finished operations in 2009, but remains available for catered parties.  This is a popular feature with the many out-of-town guests staying at the Hyatt and attending a convention next door. 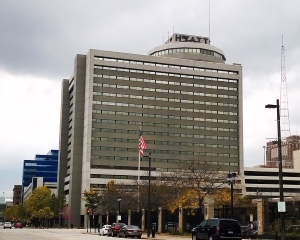 These photographs were taken during Doors Open, as the room was available to the public. I was most interested in a fixed point on the landscape and trying to duplicate the old lithograph I loved, which was near impossible.

I am referring to an 1898 chromolithograph created by the Gugler Lithographic Co. (that company’s building at 1333 N. Milwaukee Street—now the home of the Milwaukee Center for Independence—was created by architects Otto Strack, Ferry & Clas, and Eric Gugler. While the artwork has passed into the Library of Congress, original and fine condition prints of the now-famous view go for $3,450 (or you could buy a reproduction from dozens of vendors for $90).

1898 chromolithograph by the Gugler Lithographic Co.

The panoramic “bird’s eye” view showed Milwaukee supposedly from the new City Hall, which is center foreground. The streets actually bend as if you had a fisheye view with the Exposition Center on the far right (around 6th and Kilbourn), the Pabst Building at center right (Water and Wisconsin), the first Milwaukee County Courthouse at distant center (Cathedral Square), the Blatz Brewery at near left (now MSOE campus) and the Pabst Brewery at distant left (8th and Juneau).

It is a magnificent piece likely created by founder Henry Gugler, who became famous for his life-size portrait of Abraham Lincoln. Great detail is placed in color and architecture, but it would surely have been impossible for him to have sketched or painted from such a viewpoint. If true-to-life, he would have been in a hot air balloon above the Milwaukee River. No building of such height existed there at that time.

The closest I can come to gaining the same view is from the Polaris Room.  My technological abilities with the camera could perhaps take a 360-view from here, but it would not be pretty to look at on the web. Instead, above is a three-panel view of the same ilk along with some of the finer details seen from this perch.  I especially enjoy the old Nelson Brothers building (unimaginatively now named the Riverfront Lofts) which has its own rooftop party deck. 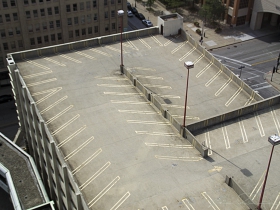 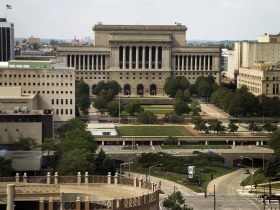 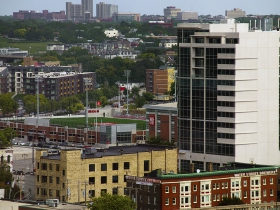 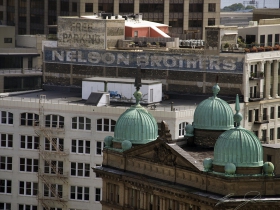 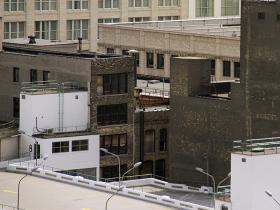 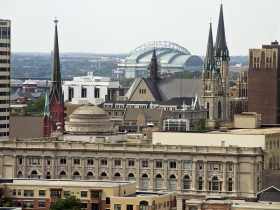