Bastille at the Milwaukee Theatre. Photo by Sara Bill.

Had the weather been better, British rockers Bastille might have shared their big sound with our big lake under the BMO Pavillion on Saturday night. As it was, the Pabst Group put on their first show at the Milwaukee Theatre, the new life of the old Auditorium. Renovations may not have rendered her as ornate as the Pabst, but she packs more in, and her acoustics are nice. The bar closed early, but those tending poured liberally.

Saturday night’s audience represented the intersection of Radio Milwaukee, FM 102.1, and KISS FM fans. Bastille sold out the theater on the strength of one commercial release, fueled by a slew of radio hits. The group began in 2010 as a solo project by singer-songwriter Dan Smith, who later decided to form a band and was soon joined by Chris Wood, William Farquarson, and Kyle Simmons. Why is a band named Bastille British instead of French? Because Bastille Day, July 14, is also Smith’s birthday. As for its music, while most of Bastille’s songs sound the same, that’s not to say some of them aren’t great. I couldn’t think of a better way to start the show than with the driving “Things We Lost in the Fire.”

When lead singer Smith, standing in front of a large triangle screen, got the crowd to form triangles with their hands, representing the stylized “A” in the band’s name, I couldn’t help but think of all the cult groups who’ve visited the Auditorium over the past century, a list that includes Nazi sympathizers, the KKK, and just last year I saw the Falun Dafa funded Shen Yun show.

“They should do covers,” I said to my hot date in the middle of the show, not knowing Smith made a name for himself as a “mixtape rocker,” creating his own copyright unfriendly versions of hit songs. The band has even covered Miley Cyrus.

“You can find them in the less spoken about parts of the Internet,” Smith told the crowd before launching into TLC’s classic “No Scrubs.” I couldn’t believe my ears. I never thought I’d see a band of British boys sing that song outside of a pub. That performance, plus an awesome encore rendition of Corona’s 90s dance hit “Rhythm of the Night,” brought Bastille firmly into my good graces and made the night officially magical.

Bastille saved the best for last, bringing out opener Grizfolk to join the crowd in chanting the vocals for their smash-hit “Pompeii.” All told, Smith proved to be much more than the male Ellie Goulding. While I wanted to beat the stuffing out of Farquarson for the bassist’s lack of enthusiasm, he didn’t stop the crowd from dancing and jumping with delight. Adding a fun touch was the attire of keyboardist Kyle Simmons. Let’s face it, you can never go wrong wearing a cut-off t-shirt sporting Barbara Streisand’s face. 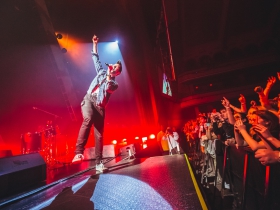 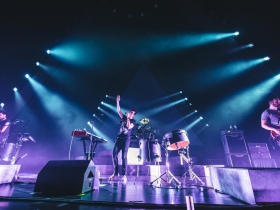 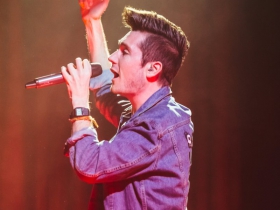 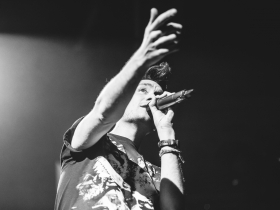 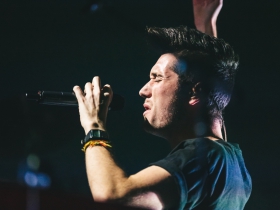 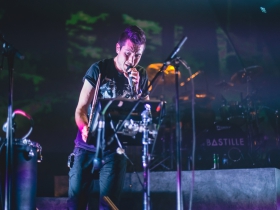