And John Gurda slips up on beer history? 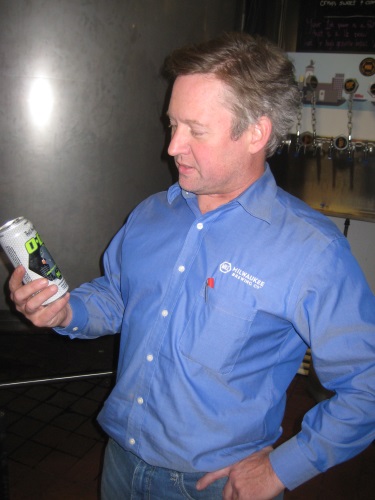 Jim McCabe of Milwaukee Brewing Company says his production is growing beyond all expectations, saying the company is years ahead of where it was expected to be at this time. The firm reported production of 999 barrels in July, 2014, up from about 400 barrels in February 2013. (By comparison, Lakefront Brewery produced 4,194 bbl in July, and Sprecher produced 1,814 bbl.)

The brewery is now operating two shifts, McCabe says, and is looking to build a new facility somewhere in the vicinity. The firm has added many bright tanks and much other equipment in just the past few months.

If you took tour photos a couple of months ago, they are out-of-date today. Huge vessels now rest where tour-goers used to gather for leisurely conversation. Just months ago one could have toured the entire operation without moving from the center of the room. Now there is stuff everywhere, and dodging traffic is a greater concern inside the building than outside on the street. There is no longer room to store the company’s vintage pickup and fire truck. A portion of the first floor is now a tasting room for the Central Standard Distillery, and the outside of the building has been considerably enhanced.

But the structure is substantially landlocked, and is not an ideal candidate for expansion for a firm with such rapid growth, McCabe says. Expansion to the south would require the demolition of two vintage buildings that recently housed “Boom” and “The Room,” side-by-side gay bars that shut their doors recently. The issue of demolition,  as well as the million-dollar-plus asking price for the place dissuaded McCabe from pursuing that option.

Instead he plans to look around for a suitable industrial property, hopefully in the vicinity, and plans to retain the existing building for tours, tasting, experiments, and special projects like such limited release products as Louie’s Resurrection, now reposing on the shop floor in dozens of old oak barrels, due to lack of space elsewhere. In order to keep the beer stable at higher room temperature McCabe said he had to increase the ABV to over 10 per cent, or about that of a German wine.

Omnipresent and mustachioed Milwaukee historian John Gurda had an essay in the Milwaukee Journal Sentinel Sunday, October 3rd entitled “One Big Vat: Consolidation Has Always Been the Case with Beer.” Spurred by recent rumors of a merger between SAB MillerCoors and Anheuser Busch InBev, Gurda recounted that brewery mergers were common in Milwaukee from the industry’s earliest years, enabling Pabst for some time to be the nation’s largest brewer. As he noted, Pabst was recently acquired by a Russian firm.

But the Pabst history (and Gurda’s story) could have been much different, for Pabst was forced to divest itself of rival Milwaukee brewer Blatz, which it bought in 1958. In 1969 a federal judge ordered Pabst to divest, an action contrary to historic trends and Gurda’s thesis. Pabst officials argued in court that a divestiture would cause the business to fail, an argument the court did not accept.

Pabst was later sold (in 1984) to G. Heileman Brewing Company of LaCrosse, and the brand began years of decline before its hipster resurgence of the 21st century. In 1996, when nobody cared about anti-trust anymore, Heileman was sold to Stroh’s, along with its Blatz brand. Then, in 1999, Pabst bought Stroh’s — and once again became the owner of Blatz.

Things might have been much different if Pabst and Blatz had remained together for those fateful 30 years.

Jersey Mike’s, a franchise sub shop that opened its first Milwaukee location in February 2013 had its first day of business Wednesday October 8th at East Pointe Commons, 600 E. Lyon St., where it has taken over about two-thirds of the short-lived 5 Guys burger joint. Management retained the striking red and white tile interior of 5 Guys. Workers earlier handed out coupons to neighborhood residents and businesses good for a free sandwich in exchange for a minimum donation of $1 to St. Joan Antida High School, located a block to the east. … Francisco Escobar, Sr., is the licensee for the Van Buren Sports Lounge which hopes to open in the old Libby’s Lounge, 1682 N. Van Buren St. … Elaine Erickson plans to close her art gallery in the Marshall Building, 207 E. Buffalo St., on June 30, 2015. She will then move to California, she says. Her space will be taken over by neighbor Tim Cobb, she says. …An art gallery is planned for the old Milwaukee Aluminum and Brass Foundry, 643 S. 2nd St. The place is ideally suited for sculpture, one would imagine, considering its original function. The building has one of the city’s most impressive streetside ghost signs, which prominently features the building’s original address of 295 – 297 Reed St. The sign may be original to the 1907 structure built by the foundry’s owner Charles Boltz, whose E. Newberry Blvd. home was the 2013 Breast Cancer Showhouse, and was featured in House Confidential that year.

Kathryn Dineen Wriston, 75, the widow of Walter B. Wriston, former CEO of Citibank, died at her Connecticut home on September 28th, 2014.

She was born in Syracuse and spent her childhood years in Milwaukee, where her father Robert Emmett Dineen was the president of Northwestern Mutual Life.  After attending Smith College, she went on to get a law degree from the University of Michigan Law School in 1963, when few women became attorneys. Her mother, Carolyn Bareham Dineen became a lawyer in the 1930’s when even fewer women became attorneys.

Also, this week funeral services were held for Polly Habler Van Dyke, another woman with ties to NML. Van Dyke was the widow of William Duncan Van Dyke III, who died in April. His grandfather W.D.Van Dyke was president of NML as was his great-grandfather John H. Van Dyke, an early Milwaukee pioneer.

Polly Van Dyke was born in New York where her father, Dr. William T. Haebler was one of the founders of International Flavors and Fragrances, a NYSE company with tremendous profits from perfumes and lemony fresh smells. Bill Van Dyke served on the board there for many years. SEC filings showed he and his wife received dividends in the tens of millions of dollars over the years, which he, a stockbroker, presumably invested well.

The Van Dykes established the Pollybill Foundation, which is likely to become an even bigger player with their deaths, and funded it with millions of dollars annually. The Van Dyke Haebler Center at Columbia St. Mary’s hospital is a women’s health facility founded with the family’s support. Daughter Ellen Van Dyke Holtgers is an international equestrian and recently bought a Florida home from Georgina Bloomberg, a fellow horsewoman and daughter of the former billionaire New York mayor. That’s it for the society news this week.

4 thoughts on “Plenty of Horne: The Remarkable Growth of Milwaukee Brewing Co.”